Some of the country’s brightest young people visited Stormont on Wednesday and were awarded medals by Paralympian Champion, Michael McKillop and Sir Robert Salisbury, for their work on the Inspire-Aspire programme.

The Inspire-Aspire Awards programme reached 35,000 young people this year by using the Olympic and Paralympic Games and the character qualities of Olympians to inspire young people to set personal goals and to develop future aspirations.

Winning a medal at the event was Sophie Malcolm from Wallace Prep who chose Chris Holmes as an inspirational figure as part of her work on the programme. 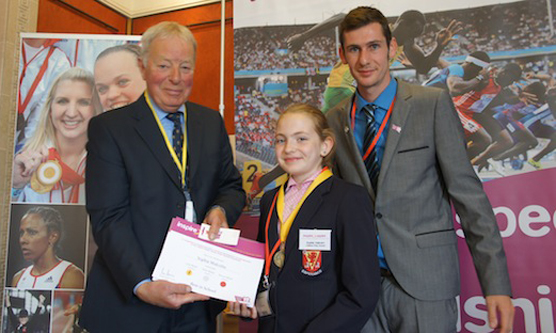 Explaining the reasons for her choice, Sophie said “I think Chris Holmes shows commitment and determination and shows us what is possible if you set goals and go for them.”

The Wallace High Prep was well represented at the prestigious event with two other of their students picking up prizes in the primary school category. Anna Thompson and Jack Baird came second and third, respectively, and were awarded with medals to recognise this by Michael McKillop.

Before presenting the awards, double World Champion and Paralympic Gold medallist McKillop told a packed audience that it was being treated as an equal and his determination never to give up which had contributed to his success.

Inspire-Aspire aims to help young people gain a better understanding of their own character qualities and values and inspire them to create a personal development plan. Sophie explained how much of an impact participating in Inspire-Aspire has had on her:

“I have learned that if you keep doing your favourite things you will end up winning competitions in the future.”