There may have been blue hair but there were no blue moods on the 24th of February when pupils of The Wallace High School took part in an aptly named “Rainbow Rampage”!. Organised by the A2 PE class as part of their coursework Wallace’s rampage involved 6 year groups ranging from P5 in the Prep Department to Year 10 in the Grammar school. The ‘Start White Finish Bright’ event was for senior pupils (Years 11 to 14) who entered enthusiastically into multi-coloured mayhem.

Approaching pupils were shocked by the obvious delight, indeed relish, of staff who took great pleasure in throwing handfuls of colourful powdered paint at the helpless pupils. By the event’s finale all pupils were covered from top to toe in a vibrant array of colours whilst Mrs Richardson was being affectionately hailed as “Smurf”.

The memorable climax to the event saw pupils funnelled into a staging area for a colour rave, featuring music by DJ Barry Thompson; the rave provided sheer unbridled joy as pupils took selfies, snapped their friends and waved to camera woman Laura Bailie whilst simultaneously covering themselves and their friends with paint.

The full set of images can be found on the school’s Facebook page. 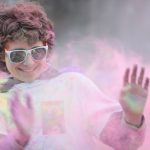 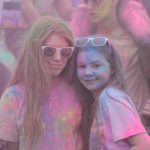 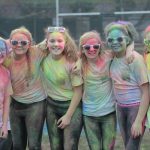 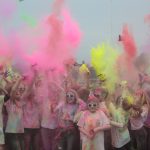 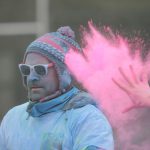 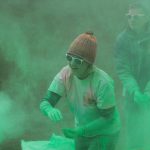 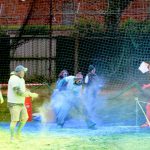 In total over 700 pupils took part and an amazing total of over £7000 was raised. The PE students are indebted to our own former pupil and radio/TV presenter Denise Watson, who acted as the official starter for the event. Denise’s daughter is in Year 8; rumour has it that car seats were covered in black plastic bags! Thanks were also due to Stephen Anderson who provided aerial drone photography and video footage for the event, Adrian Day for providing the inflatable balloon arch for the start/finish line and a huge thank you to Rebecca Oates and the volunteers from the Cancer Fund for Children for their practical assistance in organising the event.

Speaking after the event Rebecca said:

“Obviously I am no stranger to Wallace as the school has a very long history of commitment to the Cancer fund for Children but this is definitely the most colourful visit I have ever made to the school. I would like to thank the A2 students and their teacher, Mr Ian Latham, for all their enthusiasm and for choosing Cancer Fund for Children as the beneficiary. The sum raised will really change lives for the better!”

Ultimately the success of the day was due to the staff, parents and pupils of The Wallace High School who supported the event with enthusiasm. It is hoped that the money raised will help finance various projects supported by the charity and in particular their flagship facility Daisy Lodge in Newcastle.