Wallace Principal, Mrs O’Hare, looked to Hollywood for the closing remarks of her Senior Prize Day report. Quoting the actor Denzel Washington she suggested that his words epitomised the culture and essence of 2017 in Wallace:

“Life will never be a straight path. Never be discouraged, never hold back. Accept new views, be open to new opinions. And when you fall in life, always fall forward, never fall back.”

The Principal’s wide-ranging address reflected Wallace’s commitment to “Cherishing the past, celebrating the present and creating the future”. In an academic year which will see Wallace open new state of the art facilities the Principal reminded the capacity audience that the school owes much to the legacy of its founder, Sir Richard Wallace, noting that the school has exciting plans to celebrate the bicentennial of his birth in May 2018. Sir Richard’s decision to donate “a vast assemblage of fine and decorative art” has been described by the distinguished art critic Richard Dorment as “surely one of the most significant acts of philanthropy in British history.” 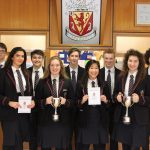 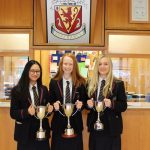 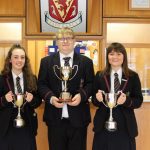 Philanthropy remains at the heart of Wallace life and culture and the Principal provided numerous examples of philanthropy amongst our current school family, observing that just over £30,000 had been raised last year for charitable causes at home and abroad.

Mrs O’Hare highlighted the holistic development of each young person in Wallace, providing numerous examples of highly varied successes: academic UK wide competitions, sporting triumphs, the wide range of clubs and societies available on a weekly basis and the life-changing experience of working with our legacy charity Asha in the slums of New Delhi. 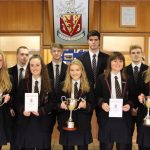 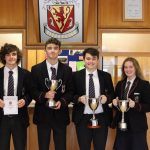 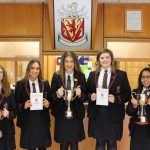 Observing that academic success is at the heart of Prize Day celebrations Mrs O’Hare recounted some remarkable triumphs: at GCSE level 98% of the grades awarded were at A* to C, 33 students achieved 10 A/ A* grades and 41 students achieved 9 A/A* grades. At GCSE Julie Yeow and Amy Warke both achieved 11A* grades, at AS level Hannah Patterson achieved 6 A grades and at A2 Aris Epanomeritakis achieved 5 A* grades. Four A2 students, including Aris, attained the “glittering prize” of entrance to an Oxbridge College.

The audience enjoyed a varied musical programme which saw a collaboration with Parkview Special School. Parkview performed True Colours followed by the popular Tale as Old as Time from Disney’s Beauty and the Beast featuring Parkview Seniors, Wallace’s Honours Choir and the use of Makaton. Julie Yeow, Amy Warke and Hannah Patterson provided virtuoso performances on piano, flute and violin mirroring their superb academic performances! 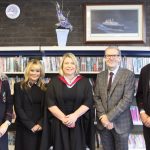 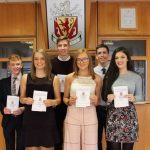 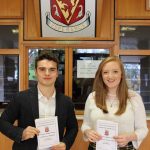 The Guest of Honour was Professor David Jones Pro Vice-Chancellor of Queen’s University (Education and Students) who is both a Chartered Engineer and a Chartered Chemist. As anticipated he gave a dynamic address and clearly embodies the spirit of excellence and innovation which characterises Queen’s, a much favoured destination for our 2017 leavers.

Wallace’s Chair of the Board of Governors Mrs Sandra McCabe, herself a former pupil of the school, described herself as “thrilled” by the day’s proceedings and the successes of 2016/17. In common with the Principal and last year’s Head of Year 14 Mrs Dumigan she had a more personal interest in the proceedings as all three ladies had sons celebrating academic success.

The afternoon concluded with the traditional afternoon tea in the Boyd Sports Hall.