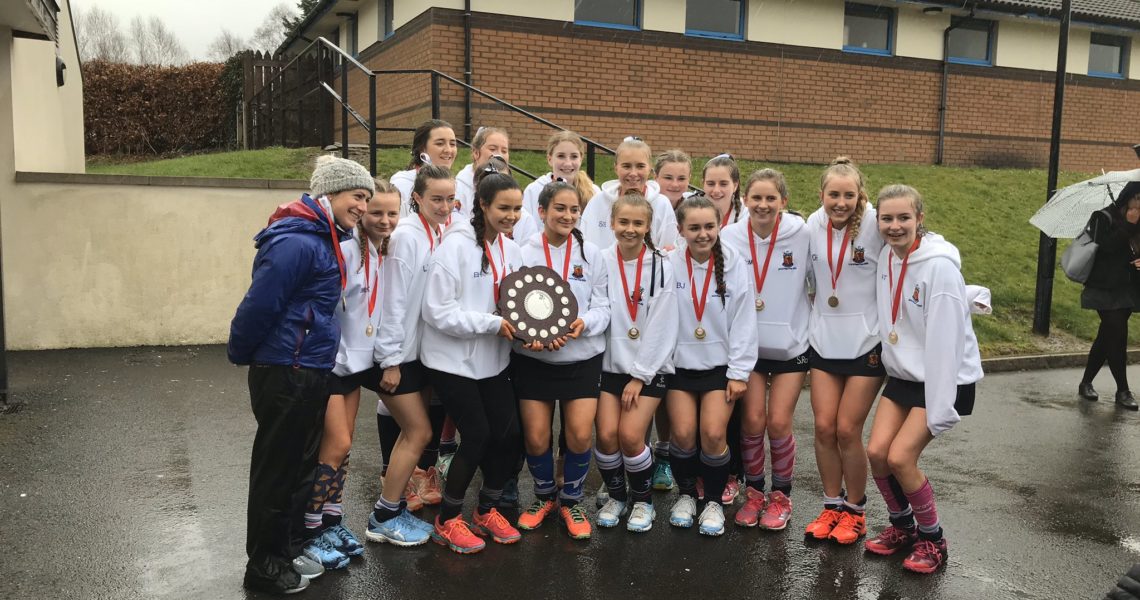 On Monday 9th March 2020 the girls’ McDowell (2nd XI) plate final was played between Wallace High School and Grosvenor Grammar at Playball, Stormont. The playing conditions were not very favourable for players and spectators with heavy rain and wind but this did not deter either team from trying to play attractive, open passing hockey. Wallace started strongly in the first quarter with plenty of possession in the attacking 23 area, however numerous set pieces and open play shots were thwarted by the actions of a lively Grosvenor goalkeeper.

Early in the second quarter Grosvenor made the most of a counter attack by winning a penalty corner from which they took the lead. The Wallace girls once again rallied to exert more pressure in search of the equaliser and managed to convert from a penalty corner, courtesy of Anna Trimble who finished adeptly from an acute angle at the right post. The half time score was 1-1 and despite dominating the third quarter the Wallace squad still struggled to find a way past Grosvenor’s fortress defence.

Into the last quarter, the girls demonstrated their usual resilience and upped the performance once again. They stayed patient and it appeared increasingly likely that their hard work and effort would pay off with another goal. Again it came from a penalty corner, Anna Trimble on hand to score from the same acute angle on the right post for what proved to be the winning goal. Final Score 2-1 Wallace.

It would be unfair to single out any one individual as the whole team played such a significant part in this win and, undoubtedly, the constant rotation of players worked well as they got respite from the tough weather conditions. On the final whistle, the  Wallace celebrations began but the team also showed great sportsmanship in clapping the Grosvenor players who had given their all too.

A special thanks must go to the Ulster Schools Girls’ hockey committee for all of their organisation which included the umpires, the use of the pitch at Playball, Stormont and the coordination of medals. Thank you also to the spectators who persevered in the horrendous conditions to cheer on the girls right to the final whistle.

It is fitting to finish by paying particular praise to co-captains Emily Hayes and Beth Campbell for their outstanding leadership skills displayed throughout the season. This was supported by the rest of the team who showed commitment, work rate and a resilience which made them fierce competitors every week and a pleasure to coach. Best wishes now go to all of the Year 14 players  (Emily Hayes, Beth Campbell, Anna Trimble, Bethany Dumican and Eve McMullan) for their next stage at university and their continuation of making hockey memories with their chosen clubs. What a great way to sign off from your Wallace hockey career. ?⚪️