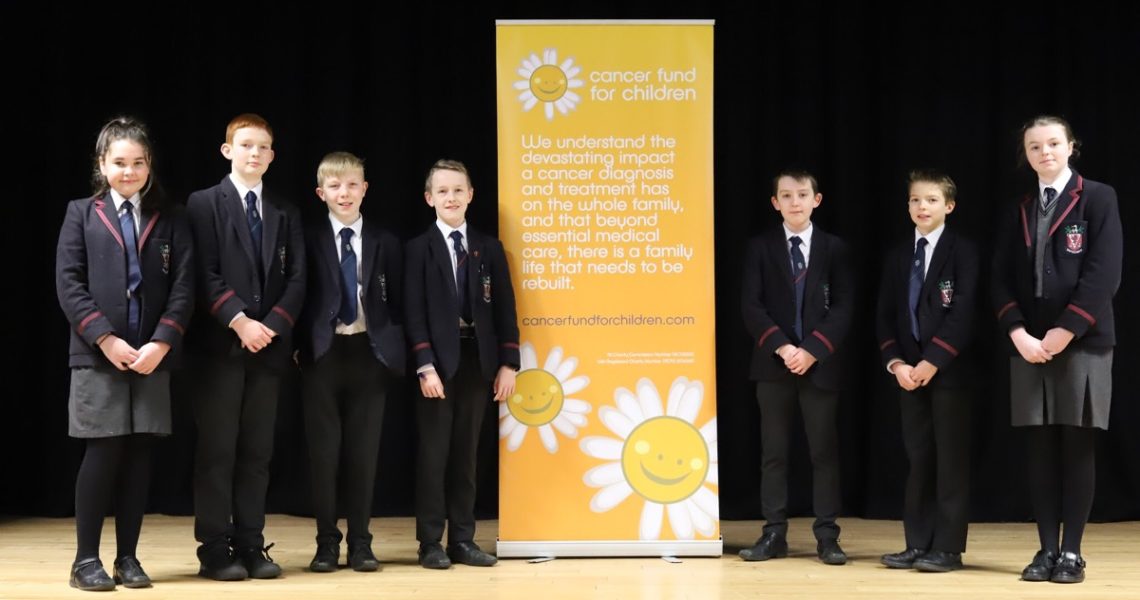 Current Key Stage 3 students at Wallace can regard themselves as “record breakers” as the school recently celebrated a huge fundraising milestone. In October, prior to our most recent ReadOn, our total donated to the charity was just over £147,000 so the English Department staff members were confident that the £150,000 barrier would be broken…in truth, it was (to quote a Year 8 pupil) “totally smashed” and £155,000 is in touching distance. We were thrilled to donate £7,000 to the fund almost equalling last year’s Muddy Mayhem total.

Schools and Youth Fundraiser Rebecca Oakes visited Wallace as the opening guest of a week of charity assemblies; the Cancer Fund for Children is one of the school’s legacy charities which means we have an on-going commitment to its work. Wallace has supported the charity for over thirty years and our involvement even has a curricular dimension;  the GCSE Journalism class attend an Open Day at the charity’s flagship centre Daisy Lodge each year and our A level PE classes organised two immensely successful events ( a Colour Run in 2017 and Muddy Mayhem in February 2019) for the cause.

Pupils viewed an excellent short film featuring families using Daisy Lodge and also the dedicated teenage facility, a log cabin known as Narnia. Rebecca shared aspects of the charity’s work, outlined their financial commitments and noted their reliance on donors; the government contributes about 1% of the running costs of Daisy Lodge. Thanking the pupils Rebecca noted:

“As a charity we could not do the work we do without the on-going support of so many people and, in particular, so many schools. ReadOn has been a marvellous scheme for us over decades and we believe it’s popular because it has real worth for schools. I want to thank you for this wonderful sum of £7,000 and I can promise you that it will be put to excellent use.”

“Coincidentally, on the very day of our assembly I met some members of a family who shared with me that they had stayed in Daisy Lodge and that it was immensely memorable. It really highlighted to me that it’s real people we are privileged to help when we support Cancer Fund for Children. I’d like to thank all the pupils who participated and my colleagues in the English Department for their support.”