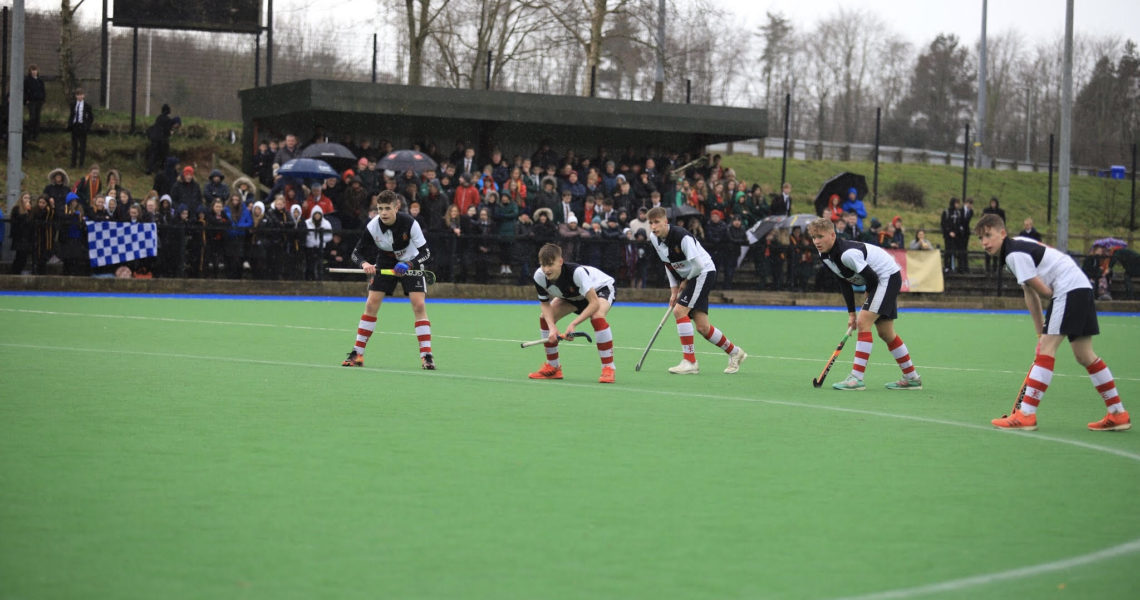 The Wallace High School boys’ hockey club has enjoyed another successful season with most teams reaching at least the semi-final of their cups. Sadly the 2nd XI and under 13s cup campaigns were curtailed due to the early finish to the season with both in the latter stages of their competitions.

The 1st XI always knew that last season’s  double winners would be a hard act to follow but this young team deserves great credit for reaching the pre Christmas McCullough Cup final and the semi-final of the Burney Cup. On both occasions they were defeated by a strong Friends team. Their Burney Cup run began with a 5-0 home victory over Bangor Grammar, Ben Clarke leading the way with a hat trick, Max Taylor and Tim Curragh chipping in with the other goals. Late February saw a 5-2 win at home to a tough Regent House team in the quarter- final, Tim Curragh (2), Max Taylor, Ben Clarke and Daniel McElhinney on the score sheet in this game which set up a semi-final against local rivals Friends at Shaw’s Bridge. Despite taking the lead through Ben Clarke with a fine reverse stick effort, as well as another superb display of goalkeeping from Ben Cooke, they were unable to contain their opponents who emerged as deserved 5-1 winners. This was to be the last hockey match in Ulster for the season as the scale of the Coronavirus emerged. Special mention, as always, must go to our four Year 14 players, captain Oliver Patterson, Peter Milligan, Tim Curragh and Ben Clarke who have been committed members of the hockey club since Year 8. We wish them well for the next part of their lives as they now move on from Wallace.

Perhaps the biggest story of the season has been the success of the 2nd XI under the enthusiastic leadership of Mr Armstrong and captain Adam Duff, the only Year 14 pupil in a squad made up mainly of Year 12 pupils. Unfortunately, having made the Prior Shield final and Dowdall Cup semi-final, both competitions were unable to be completed due to the shutdown of all hockey in Ulster. The run to the Prior Shield final produced some memorable moments, none more so than the 2-1 away win over Banbridge Academy in the semi-final, still arguably the toughest place to get a positive result in schoolboy hockey. Matthew Chambers and Harry Robb were the goal scorers in this game but sadly the final v Friends will probably never now be played. Convincing wins over RBAI and Methody in the Dowdall Cup saw the team progress to the semi-final of that competition where they again looked set to face local rivals Friends. This has been an excellent season for the 2nd XI with many players getting experience of playing senior hockey. They were defeated only once throughout the year.

The under 15XI reached the semi-final of the Richardson Cup, a competition which we entered as holders and a good achievement for this team. A resounding 6-0 win over Grosvenor Grammar in the quarter-final (David Warke 3, Jack Gilmurray, Ethan Fryers and Daniel Murray the scorers) set up a home semi-final versus Bangor Grammar. A late rally from the team saw the them lose narrowly 3-2 with Kyle Fell and Max Spence on target.

Despite only two defeats throughout the course of the season, the under 14XI received the toughest of tough draws away to Banbridge Academy in the first round of the Ferris Cup. Having drawn with the same opponents earlier in the season, they went into the game full of hope but never really got going during the match which resulted in a 3-0 defeat. There are many reasons to be positive about this particular team who possess real talent and ability. Many players have been involved in Talent Development Programmes and Michael McIlroy finished the season as top overall goal scorer in the hockey club with twenty three goals as his success rate.

The under 13XI had also reached the semi-final of the Bannister Bowl where they were due to play Friends, reward for an excellent season recording only one defeat by Sullivan Upper. Their cup run saw a 7-0 win over Grosvenor Grammar (Max Turner 2, Harry Gowdy 2, James Gorman, Oliver Tumilty and Ant Spence) and the same score line v Campbell College B ((Milo Thompson 3, Oliver Tumilty, Max Turner, Max Crainey and Ant Spence). This is an exciting squad who play an excellent brand of hockey and should continue to improve technically and tactically next year.

As always, the under 12s played a series of mainly eight aside games with fixtures against most hockey playing schools taking place after Christmas. They also took part in an end of season blitz at Methody where they performed very well and many players committed to Wednesday morning coaching sessions before school. There are several highly talented players in this group, whilst those who had played little or no hockey before coming to Wallace have made great strides throughout the year. They will look forward to regular Saturday morning hockey next season which will benefit all players.

On the representative front, four of our players played for Ulster in the September interprovincial tournament in Belfast. Ben Cooke and Max Taylor represented the under 18s, whilst Paddy Watson and Daniel McElhinney played for the under 16s. Special mention should also go to Daniel who made his Irish under 16 debut versus England at Lilleshall over the February half- term break.

It only remains me to thank everyone who has made this season possible. To the players themselves for their commitment every week, families and supporters for all that they do for our players and Oasis Travel for their continued sponsorship of our 1st XI. Last but by no means least, a massive thank you to our coaches for their continued dedication. To Mr Simpson, Mr Armstrong, Mr Harper, Mr McKnight, Ben Nelson and Callum Patterson it is fair to say that this would not happen without you.