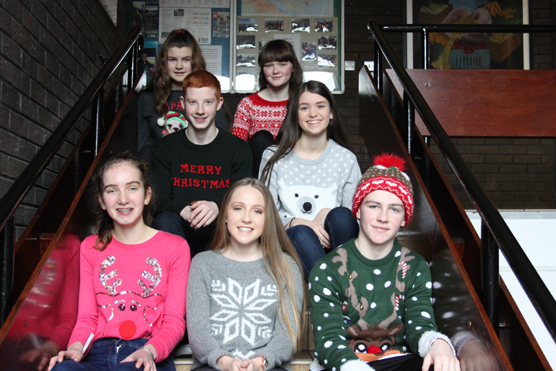 Christmas isn’t Christmas without a C and carols, charity and Christmas Pie are the core elements of a Wallace Christmas. Our choirs, Capella and Cantabile, delighted a wide range of audiences in venues as varied as St George’s Church in High Street, Belfast and Waterstone’s in Lisburn. The annual Carol Concert was held in the beautiful setting of Saint Patrick’s Church; Head of Music Mr David Falconer was delighted to see the church full to capacity. Wallace’s senior choir Capella is very highly regarded in musical circles for the sophistication both of its repertoire and its blending of voices. The Honours Choir is made up of a group of senior pupils within Capella and these students are especially accomplished vocally. In addition to the school events Capella participated in a service for the BBC and the Honours students performed alongside Ardú featuring former pupil Vicky Warwick in a concert in aid of Shelter. Cantabile’s numbers are currently very high as Year 8 pupils have shown themselves to be enthusiastic vocalists. Their performances at Saint Patrick’ s (the rehearsal can be seen on Facebook) and the school Carol Service left both audiences highly impressed by the assurance of their performance. 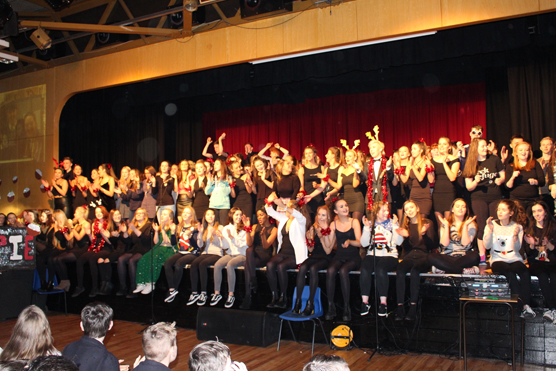 Charity is at the heart of the Christmas season and we were delighted that a significant number of Year 13 students volunteered in a number of settings. Students packed shopping for Tiny Life, supported the Rotary Tree of Remembrance appeal and helped out at Santa’s Grotto for Cancer Research. The entire school family contributed to the hampers collected for the Lisburn Women’s Aid and the staff also donated to pamper hampers for the charity Storehouse. Our annual fun-fest of Xmas style (Christmas Jumper Day) was in aid of Tiny Life, the charity for premature babies. Christmas tree dresses, flashing jewellery, musical sweaters abounded …and that was only the staff!

Tiny Life and Ovarian Cancer were the two beneficiaries of Xmas Pie, a venerable Wallace tradition which features music, dancing and sketches featuring familiar school personalities. Not to be outdone the staff offered their own pantomime Tangled; as befits a story centred around Rapunzel’s luxuriant locks. There were a few dodgy wigs with Miss Pascoe’s blue beehive being especially memorable! Mrs Karen Brett (Head of Health and Social Care) who supported the students in preparing for Christmas Pie said of the event:

“It was a great collaborative effort from Year 14 and everything came together really well on the day of the performances. The show gives the students an opportunity to work together and to raise funds for important causes; Xmas Pie is also for many a cherished memory of their time at Wallace.”

The Wallace community hopes to present Tiny Life with just over £2,500 for their work and just under £1000 has been raised for Ovarian Cancer. Wallace Principal, Mrs Deborah O’Hare, said:

“I am delighted that so much was given by so many during the Christmas season. The financial and practical donations are, of course, very significant to the beneficiaries but I would also wish to thank and praise our students for giving the gifts of commitment and time to these worthy causes.”