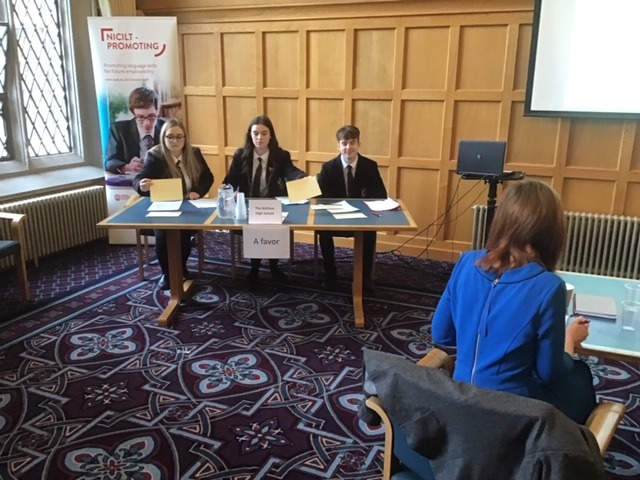 “This annual competition saw 10 schools from across the province come together to explore current affairs in Spain, engage in Spanish culture and improve their language skills.”

The Wallace team of Patrick Adair, Laura Moore, Ciara McMahon and Imogen McLernon, ably supported by teacher Carolyn Schumann and  Language Assistant Blanca Aznar ( a native Spanish speaker)   only had a week to prepare their debate but did not let the time constraints deter them.

Wallace faced Bangor Academy, debating the motion that ‘Work commitments are causing the breakdown of the family unit.”

The debate was impressive, hotly contested and characterised by cohesive arguments and complex use of language; unfortunately the Wallace students were not successful in winning on this occasion.  Team Captain Yr 13 student Patrick Adair,  commented:

“Despite not being the overall winners, our day at QUB was incredibly worthwhile and taking part has improved our confidence enormously. It was also fantastic to hear the level of A2 Spanish spoken by the students from the participating schools as many of our fellow competitors were Year 14.  It has genuinely inspired us. We hope that next year we will have the opportunity to participate in this exciting event again and of course, we want to thank Blanca and Mrs Schumann for all  their  encouragement and support.”