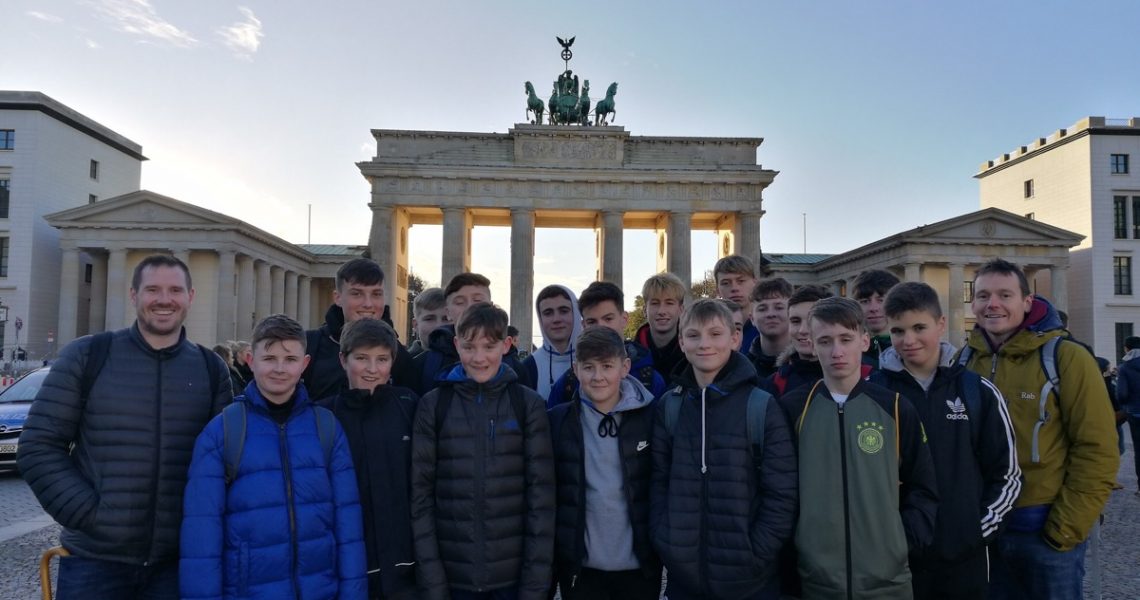 “Memorable beyond words” was the general conclusion regarding this recent trip. Led by Head of History and Politics, Mr Neil Armstrong, supported by his departmental lieutenants Miss Frey and Mrs Young and the “stellar” assistance of Mr Alexander, Miss Pascoe, Miss Howard, Mrs Kinahan and Miss Stevenson, seventy-one Wallace students spent half term seeing history come to life. The trip explored the horrors of Nazism especially the depravity represented by Auschwitz and Birkenau, the bleak realities of life under Communism and concluded with a visit to the Wieliczka salt mines, a joyful illustration of human ingenuity and craftsmanship. During the five days of the trip the students saw for themselves iconic landmarks such as Checkpoint Charlie and experienced for themselves the haunting impact of the concentration camps which have become emblematic of man’s cruelty to man.

Speaking after the trip Mr Armstrong expressed his thanks to the students for their excellent behaviour and open enthusiasm. He also thanked the teachers “a stellar team who embody the commitment which distinguishes teaching as a profession” and noted that for all the group the significance of the events of history had taken on a new and profound reality.

See below for a diary of the trip.

Five am at the airport was the start of our journey; parents seemed very eager to say goodbye despite the early hour. A short two hour hop across Europe with Ryanair found us into our first city, Berlin. 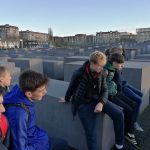 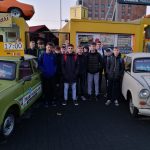 A short coach journey took us to Hotel Tiergarten and then to Alexanderplatz for some lunch. Our first activity was a three hour walking tour of Berlin. This tour was led by four superb guides who immersed us in the geo political history of Berlin. Fascinating sites included the Brandenburg Gate, the site of Hitler’s bunker, the Berlin Wall, Museum Island, Checkpoint Charlie and the thought provoking Holocaust Memorial. The tour was broken up with a much needed rest stop for weary feet and flagging bodies at a homely Berlin bakery where we indulged in cake and hot chocolate.

Following a high carb meal (pizza and pasta) we ascended the iconic TV Tower. Built as an example of the achievements and technological advances of Communist East Berlin, the tower offers dizzying and dazzling panoramic views of the city. With heavy heads, throbbing feet and the prospect of a night’s sleep, we quickly checked into our rooms and entered the land of nod.

A superb spread for breakfast gave us a spring in our steps. Our first stop was the Topography of Terror Museum located on the site of the former Nazi SS Headquarters in Berlin. Positioned on the Berlin Wall, surrounded with history from the 20th Century, the museum depicts insightful and horrific detail of how the Nazis used terror to control the German people and punish those who did not conform to the Nazi ideals of the master race.

A brisk walk took us to another historic highlight in Berlin, the DDR Museum. This highly interactive museum presents what life was like living in East Berlin during the Cold War. This included a full scale soviet era apartment, soviet era cars and motorcycles, as well as a series of engaging displays on day to day life for East Berlin’s citizens.

Following a quick group photo opportunity at the base of the TV Tower, we boarded our coaches and headed to the Olympic Stadium. Built by the Nazis for the 1936 Olympics, the stadium was designed to hold 100,000 people and was an attempt to show the world the might of Nazi Germany. The tour of the stadium was truly fascinating taking in not only its history but how it is still used today.

Following a meal at a local restaurant we climbed back into our beds with great memories of Berlin and excitement about the next stage of our trip. Krakow. 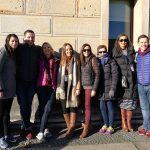 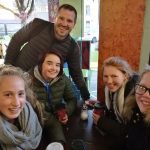 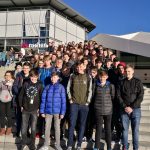 Day three dawned with a hearty breakfast from the impressive spread at Hotel Tiergarten. A quick check out and we settled down to a long coach journey to Krakow. Many used this time to catch up on much needed sleep and recuperation of tired muscles. Following a number of essential rest breaks we finally arrived within the Old Town of the beautiful former capital of Poland, Krakow. Our home for the next two nights, Hotel Campanile is set within the parklands which surround the old town. After a traditional Polish dish of meatballs and potatoes we ventured out to the large shopping centre at the main train station. After some much needed retail therapy we returned to our hotel as an early start awaited us the next morning.

The morning for day four came too early for everyone. However, our destination of the Auschwitz Birkenau concentration camp was worthy of the sacrifice of sleep. Set within lush Polish countryside this camp was both mesmerising and horrific at the same time. Our tour guides walked us past tons of human hair shaved from the Jewish prisoners in the camp, their luggage cases as well as personal items. This moving, yet stark collection of items was further brought to life by pictures of some of the earliest inmates of the camp. Most survived only three to four months. The camp contains powerful imagery of the horrors that took place, including a crematorium, the guard towers, the barbed wire fences and underground cells where inmates awaited execution against the Death Wall. The unsettling nature of this site is further intensified by the distinct lack of wildlife, giving the impression that even birds find Auschwitz too nightmarish to inhabit.

A short coach journey took us to the second part of this huge complex given to human slaughter, Birkenau. Built to accommodate over 100,000 inmates at a time, this camp was created to hasten the Nazis’ eradication of the Jews from Europe. Some of the site remains intact, including the original train entrance and disembarkation area where inmates were separated into two groups by Nazi doctors. One group would be destined to work until they died and others, such as the old or women with young children were sent straight to the gas chambers to be killed using Zyklon B. It is estimated in some cases that anything between 60 to 80 percent of all those who were crammed into the railway carriages died before they arrived. The wooden huts that would accommodate up to a thousand inmates are preserved to allow visitors to witness first-hand the horrific conditions inmates faced whilst being expected to survive with little food and hard labour in the local mines.

The air hung heavy with the stench of the true horror of the Nazi oppression of Jews, gypsies, Slavs and many other groups deemed unacceptable by the Nazis. Returning to Krakow we headed to Oscar Schindler’s Factory and the Jewish quarter where a ghetto had been established during WW2. Following our lunch, with many students sampling the local mushroom based baguette pizzas, we set out on a tour of the city of Krakow: we moved through through the Jewish quarter, the beautiful “old town” area of Krakow and the Royal Palace. Pausing at the castle we enjoyed the majestic views before moving back into the Old Market Square. The Square is a truly stunning spectacle of buildings dating as far back as the 14th and 15th Century.

After another Polish dinner of meatloaf and barley at our hotel we settled down to an early night as the toll of four days of walking and early mornings took their toll. 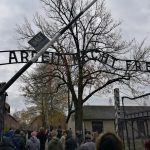 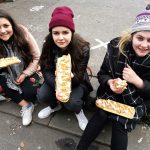 A much more relaxed and sedate breakfast was gratefully received on the morning of the final day of our trip. Energized and packed we left Krakow to go on our final adventure of the trip , the Wieliczka Salt Mines. The mines date back to the 14th century and the tunnels run for some 200 km underground. Following a steep descent into the bowels of the mines we were delighted and astounded by the spectacles awaiting us. Huge chambers had been carved out of the salt and then transformed into chapels, cathedrals, auditoriums and much more. Vast brine filled lakes lie underground and the ceilings are supported with colossal wooden supports and structures. Intricate scenes of the last supper and other biblical stories have been carved into the salt with great care and precision. The dark caverns and tunnels are reminiscent of images from movies such as Indiana Jones and the Lord of the Rings. 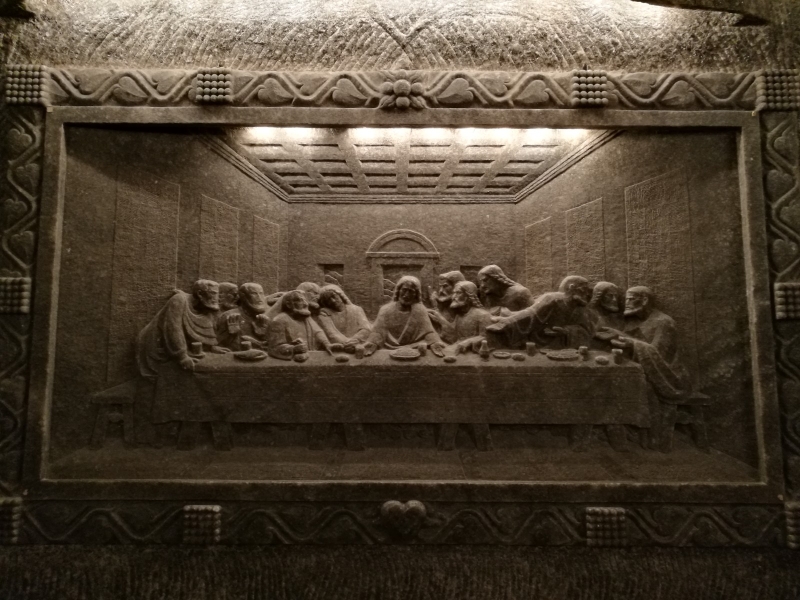 A short elevator ride brought us up from 135 metres underground and into the light of day once again. A brief lunch and a short hop took us to Krakow airport and our flight home.