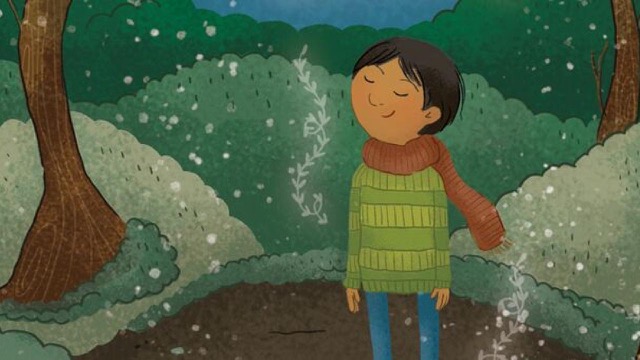 Year 8 student Max Kamalarajah recently attended a glittering ceremony at Belfast City Hall where he met one of the key architects of the Northern Ireland peace process, Senator George Mitchell. The Senator was in Belfast for a round of engagements to acknowledge the 20th anniversary of the Good Friday Agreement and to launch some new initiatives.

Max, accompanied by his mother Jayne and Wallace Principal Mrs Deborah O’Hare, was a guest at the Peace and Beyond reception; Max had been highly commended in a competition organised by the British Council for his piece entitled Heavenly Peace. The British Council commissioned illustrations to accompany the work of prize winners.

Speaking after the event Max said:

It was an amazing experience to be a guest at the Peace and Beyond reception. A lovely lady called Elaine from the British council looked after us and made us feel like VIPs. There was lots of fancy food including delicious sticky cocktail sausages…I may have eaten most of them! I even had my photo taken with Senator George Mitchell. I have to admit that before last night I didn’t really know who he was but after hearing him talk about what Northern Ireland had been like before I was born I realised what a big deal the Good Friday Agreement had been and how because of it and people like Senator Mitchell I am able to enjoy growing up in a peaceful Northern Ireland. 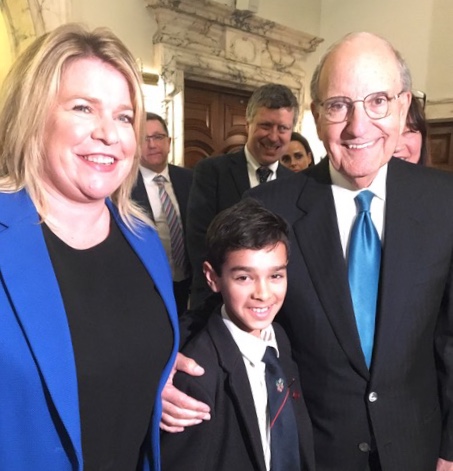 Max’s mother, a former Deputy Head Girl of Wallace, admits to being of a vintage for whom “the troubles” were very real, noted:

“Having grown up in “the troubles” it was a privilege to have been able to attend the reception and listen to Senator Mitchell’s address. Unlike Max I do remember the Good Friday Agreement very well and without a doubt it brought better more peaceful times to our province. Max looks at me with disbelief when I talk about the road barriers in Lisburn, endless army checkpoints and handbag searches in shops! Thanks to Max we were able to tag along as his guests. Despite him being a little person we were definitely in his shadow at the ceremony. It was truly a proud moment.”

“It was a privilege to hear Senator Mitchell speak and I am sure that the young people who attended were inspired to continue to build on the foundations laid by these history makers.”