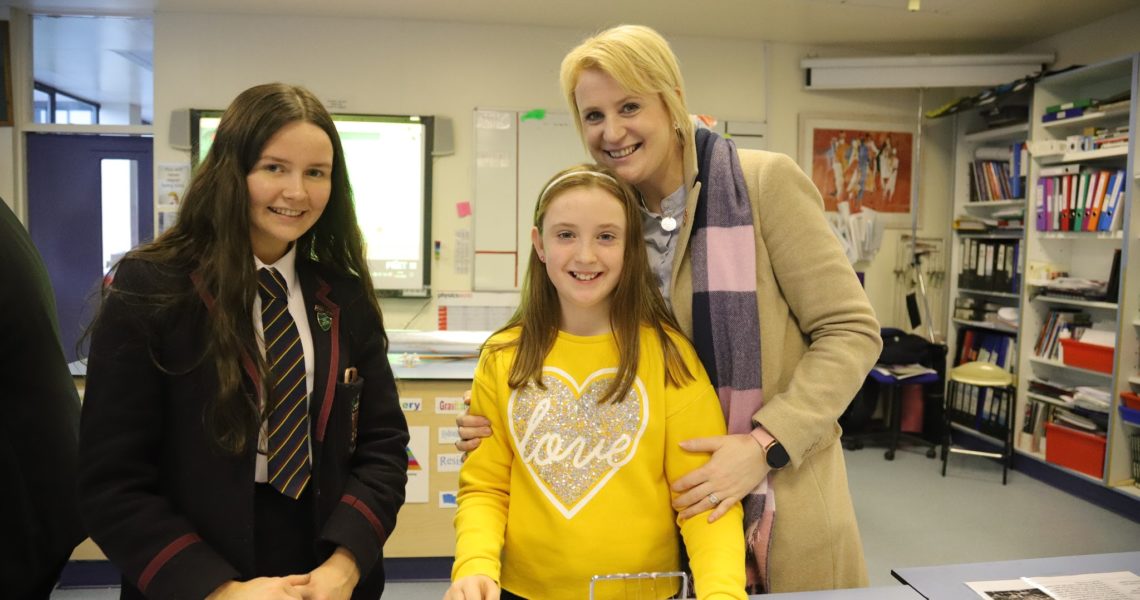 “Open Morning is my favourite event of the school year because it reflects the warmth, friendliness and enthusiasm which are the keynotes of the school’s identity. It is a privilege to welcome both old friends and new to the school and I know some visitors will be delighted to see their former (not old!) teachers.”

Thousands of eager visitors thronged the corridors and a capacity audience in the Assembly Hall heard the Principal outline what makes Wallace “distinctive, special and loved”.  Her companions on stage, Head Boy Oliver Patterson, Head Girl Jasmine Cairns, Eden Walker and Ryan Broadhurst participated in a Q&A session which outlined the opportunities prospective pupils would enjoy. Speaking directly to the potential anxieties of our young visitors current Year 8 pupil Eden assured them of the pastoral support provided by staff throughout their first term and the fun activities designed to help them bond. Ryan noted the Year 8 concert as a highlight of the term; his set played their piece on their iPads, a feat which was projected on screen! Oliver and Jasmine made it clear that attending Adventure Day for the second time as a Year 14 student was a real “perk of the job” for the Senior Prefect Team.

As always, visitors had the opportunity to meet pupils and staff in departments around the school where a galaxy of inter-active activities met them. The Biology, Chemistry and Physics staff and pupil helpers were set to amaze, astound and appal in equal measure… dissection is the Brexit of Open Morning! Our new wing, which houses Art, MIA and Food and Nutrition, delighted our guests with its airy spaciousness and many visitors lingered there seduced both by the culinary delights and the marvels of film making. Our “Smart Environment” (a facility we believe to be unique to Wallace) intrigued and delighted the IT literate and IT illiterate in equal measure and who doesn’t enjoy some “dressing up” and “pampering”? English and History provided the former in abundance and the nail bar in Modern Languages offered designs in the colours of the French, German or Spanish flags. Our three Modern Language Assistants joined us for the morning and are so composed and professional they were frequently mistaken for teachers!

Predictably, our Strength and Conditioning Suite was constantly busy as arms and legs worked vigorously as fitness was tested on rowing machines and exercise bikes. Mrs O’Hare noted in her address a number of professional rugby players (Jacob Stockdale, Ian Whitten, Kyle McCall and Chris Henry to name a few) who cut their competitive teeth at Wallace and our new enhanced facilities should hopefully assist those with such ambitions.

Our recent production of A Christmas Carol had provided opportunities to master skills of stage make-up and some visitors relished the chance to look as if they had suffered a beating in the back streets of Victorian London! Visitors to our rugby and hockey pitches witnessed Wallace pupils win both fixtures; the Medallion XV triumphed over MCB and our girls defeated Glenlola reflecting Mrs O’Hare’s earlier comments on our reputation as an “outstanding school for sports.”

Our Head Boy and Head Girl paid tribute to their “outstanding teachers” with Jasmine observing:

“The school’s CORE values are commitment, opportunity, respect and excellence and for me that just sums Wallace up. I will never forget the opportunity I had to visit India with Wallace and to see the inspirational work of our legacy charity ASHA.”

Head Boy Oliver had the last word of the formal part of the proceedings and his passion for the school shone through. Commenting that he is “second generation Wallace” Oliver concluded his assessment of what the school means to him by asserting:

“I’ll always be proud to be a Wallace man.”

The school was honoured when Suzanne Higgott, a specialist curator at the Wallace Collection in London, agreed to write a piece for the 2020 Prospectus, the year of our 140th anniversary. The centre spread entitled The Secret Philanthropist quotes from a speech given by Sir Richard in 1875 at a school in Sussex which, we believe, resonates in the Wallace High School of 2020:

“Copy the example set you here, and, believe me, your school days will be the happiest you will have your whole life through.”