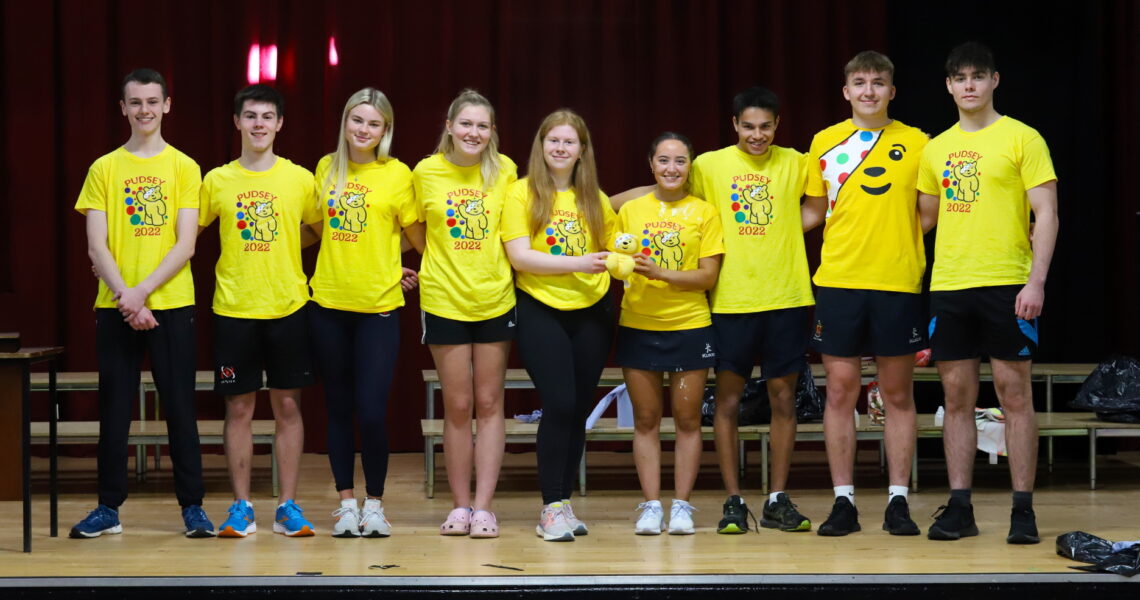 Pudsey almost discarded his eyepatch in his exuberant response to Wallace’s Children in Need events which have raised over £2,000 for the annual BBC event. The Senior Prefect Team, supported by the Heads of House, organised a spectacular bake sale (always a Wallace favourite) which raised just under £550! With a charming centre piece featuring our one eyed charity champion and Pudsey themed buns, the team provided an eye-watering feast of sweet treats which resulted in empty tables! A Guess the Number of sweets in the jar raised over £50 and the large jar was won by Mrs Whitcroft’s Year 9 HE set much to their delight!

Years 8 & 9 had the pleasure of attending the Pudsey Games in the Assembly Hall which saw pre-recorded material featuring the Senior Prefect Team, a live Stack the Cups challenge, raffle results and the much anticipated cream pie fun. As befits the responsibilities of leadership our Head Boy and Head Girl, Josh and Samia, “took one for the team” and discovered the value of full fat cream for the complexion. Physics teacher, Mrs Wendy Davison, heroically stepped up for the staff and there’s no doubt that Seth Bovis, Rosie Boyd and Isabel Duncan enjoyed their moment in the limelight.

Thanks are due to Isaac McIlwrath and Josiah Wright who were providing IT support on the morning and a huge congratulations to the Senior Prefect Team who enthused their appreciative audience.

“Children in Need is always a popular event and in keeping with our strategy of encouraging pupil leadership the responsibility rested largely with our Senior Prefect Team. They really rose to the challenge and hopefully enjoyed themselves too.”