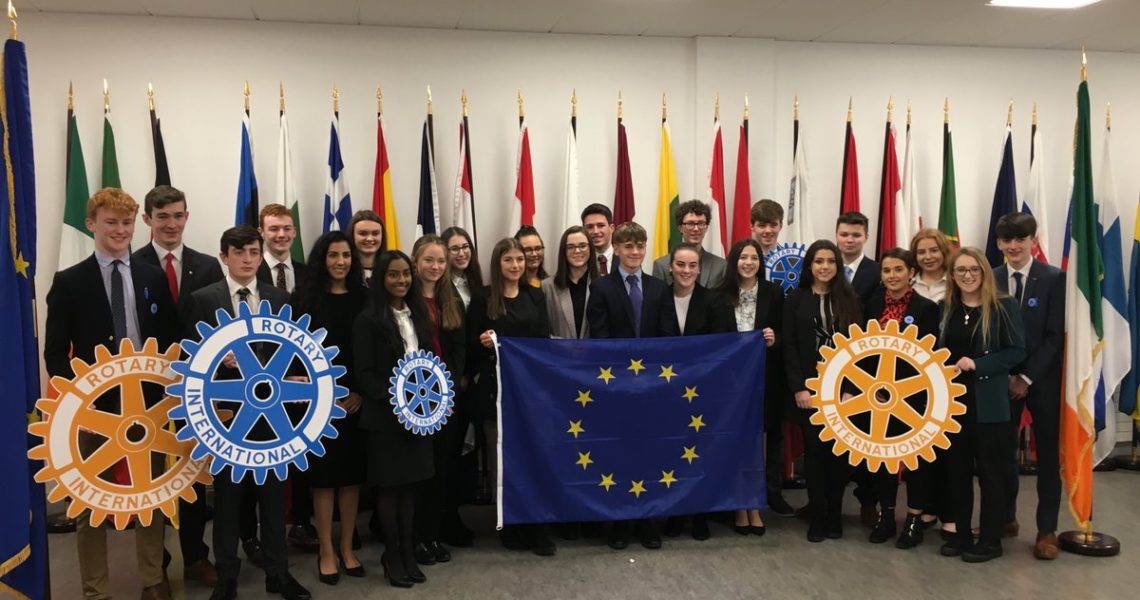 After winning the Rotary Youth Leadership competition 2019, Holly Mackin from Year 13 was awarded an all-expenses paid trip to Strasbourg to represent Ireland as a delegate at the European Parliament building in February. Here is her journey:

The interview process entailed a series of questions about leadership skills, current affairs and environmental issues. It was an invaluable experience for me as I was provided with an insight into tough interview situations, which will help me immensely in interview contexts in the future.

The 24 participants (hailing from Derry to Kerry) met in early February in Belfast as a group for the first time and this proved a great opportunity to begin to chat over the ideas and issues pertinent to our trip.

My group was designated the task of discussing ‘The Future of Europe’ and creating a proposal for the direction we envisaged for Europe; this and other topics such as the environment, security and human rights would then be debated in the chamber.

While the task seemed gruelling due to the ambiguous topic title, which could go in endless directions (paid politicians don’t know the future of Europe!) everyone was genuinely passionate about our topic and it generated intense, authentic discussion.

The next day we went to Stormont Parliament buildings, which was particularly interesting for the people from the South who were largely unfamiliar with the political system in Northern Ireland. It was great to engage in dialogue with local politicians such as Mike Nesbitt.

We headed to Dublin the next day and visited the EU Information Office, where we were briefed about what we would do in the EU Parliament once we got to Strasbourg. It was also a prime opportunity to get information from an Irish MEP. We then went to the Dàil and got the chance to see Irish Taoiseach Leo Varadkar, and watch a live debate in the chamber. Our group was also featured on RTÈ news as we were questioned about the importance of Brexit to us and our opinion on a potential hard-border lingering in the future.

That night we flew to Strasbourg, excited about what was to come.

We had free time to roam the picturesque, authentically Alsatian city and enjoy ourselves before the following day, when we would actually be debating in the chamber of the EU Parliament. This was also a great time for me to use my French language skills while translating for my friends!

We drafted proposals that night, working into the early hours of the morning writing speeches and finalising our ideas.

Our group was confident with our proposal the following day as we went to the EU Parliament for Euroscola.

Ireland truly dominated the chamber during the debating session, despite 500 other students being present from each and every EU member state. Due to Brexit and the major focus on the Irish border, we could speak passionately about  this topic from personal experience. Having representatives from both parts of the island we could convey a dynamic insight into the perspectives and potential problems from each side of the border. I was extremely proud of our representation of Ireland.

My experience at the European Parliament was second to none. I was provided with the opportunity to meet like-minded students from across Europe, all united with the shared goal to create a positive European Union in the future. Being a linguist, I was able to make friends from Belgium, France, Austria and Germany, something I wouldn’t have been able to do otherwise.

I would like to thank Rotary for this life-changing experience and encourage other students to apply for this competition if they have a genuine interest in making a difference on an international scale.

I was honoured to represent Wallace, Lisburn and the youth of Ireland and to speak in such a prestigious venue, especially at such a consequential time for Ireland’s relationship with the EU.

My team of Irish delegates are all children of post-conflict Ireland and we have a deep appreciation for EU values and the significance of a peaceful society.

I am confident I have made life- long friends through Rotary Ireland and met bright, influential people some of whom hopefully will be leaders in a new Europe.