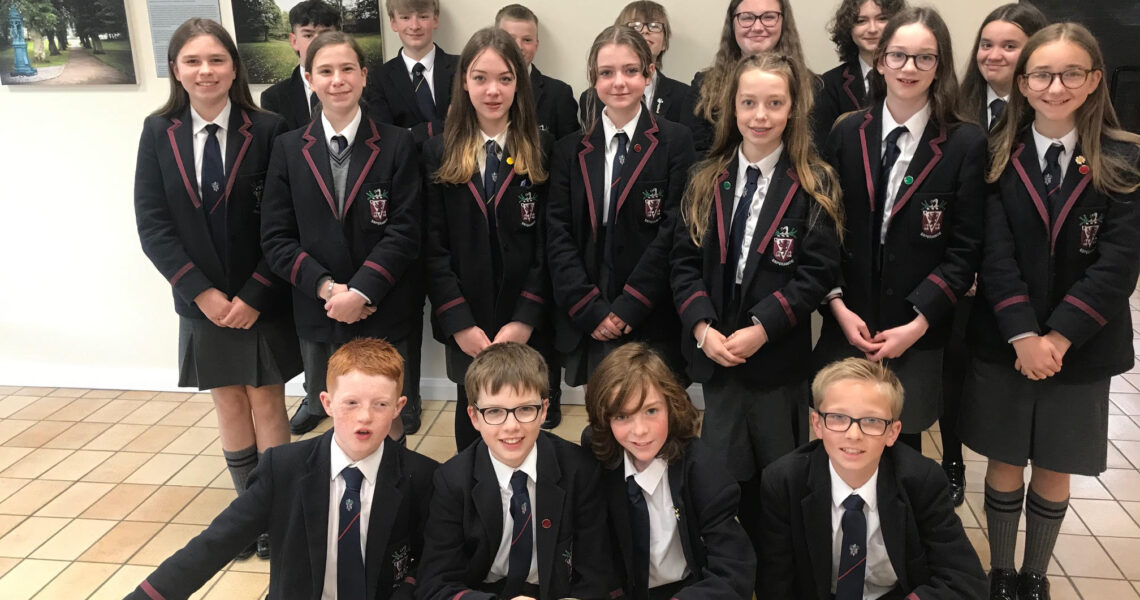 The Bard himself made an appearance at Wallace …looking remarkably fresh faced! If doubters ask about the relevance of Shakespeare’s plays they only needed to witness Wallace’s first festival celebrating the timelessness of “the Scottish play.”

Year 8 enjoy a double period of Drama on their weekly timetable and 2021-22 saw a new emphasis on Shakespeare and his contribution to our cultural history. Following the February half –term the pupils researched Shakespeare’s life, gleaned an overview of his work and were introduced to ideas about theatre in Shakespeare’s time. The classes studied a version of Macbeth and were then assigned a particular section of the text to prepare for performance which gave them the opportunity to learn about casting, costume, camera angles for filming, special effects, props and the all crucial performance skills. The unit was designed to incorporate lots of opportunity for team work, creativity and communication/presentation skills.

The format of the afternoon was a slick combination of pre-recorded films by each class set and some live action featuring a mix of contemporary and period costuming. To give the event the dignity it deserved the Year 8 pastoral staff served as adjudicators for the festival judging the runner up and winning sets. The films featured a number of locations around the school, a stylish mix of colour and black and white filming and some great costumes and props. Slides (presented in a suitably spooky gothic font) provided those unfamiliar with the story with a narrative line and the biggest cheer of the afternoon came when we saw “the traitor’s accursed head” … an enlarged image of Frazer Rogan.

The film clips and live performances were placed within a “frame narrative” which presented conflicting perspectives on the “interest value” of Shakespeare’s plays and featured a resplendently costumed and bearded Will, played with aplomb by George Kravcenko.

The conclusion of the festival saw the announcement of the winners (set 5 ) and the presentation of our very own Oscars (one per set) as chosen by each set’s teacher. Some highlights of the live event were: the rock chick witches (big hair, fishnets, leather jackets, kohl rimmed eyes…eat your heart out Claudia Winkleman); George’s doublet and ruff; Kate’s Queen Elizabeth 1st style costume and Lady Macduff’s  floral crown which Ophelia would have coveted! The Year 11 musicians, professionally garbed in black, were terrific and really added to the atmosphere of the event but the true star was the timeless story. As Will himself once noted “The play’s the thing…”

Congratulations to Mrs Richardson and Mrs Weir on the success of this inaugural event. Mrs Weir commented:

“This has been a fabulous afternoon. I’m so proud of your creativity and energy and I hope you have enjoyed not only today but the preparation for today. We’ve also seen some great re-creations of the Globe theatre in your ptoject based learning.”

Prizes were also presented to the top debaters in Year 8. Thanks to Mr Carder for his work with the Junior Debating society. The winning team was Jack Winton, Abigail Ivonici and Katelyn McMurray. Star debater was Niamh Harrison whose team was narrowly defeated in the final.