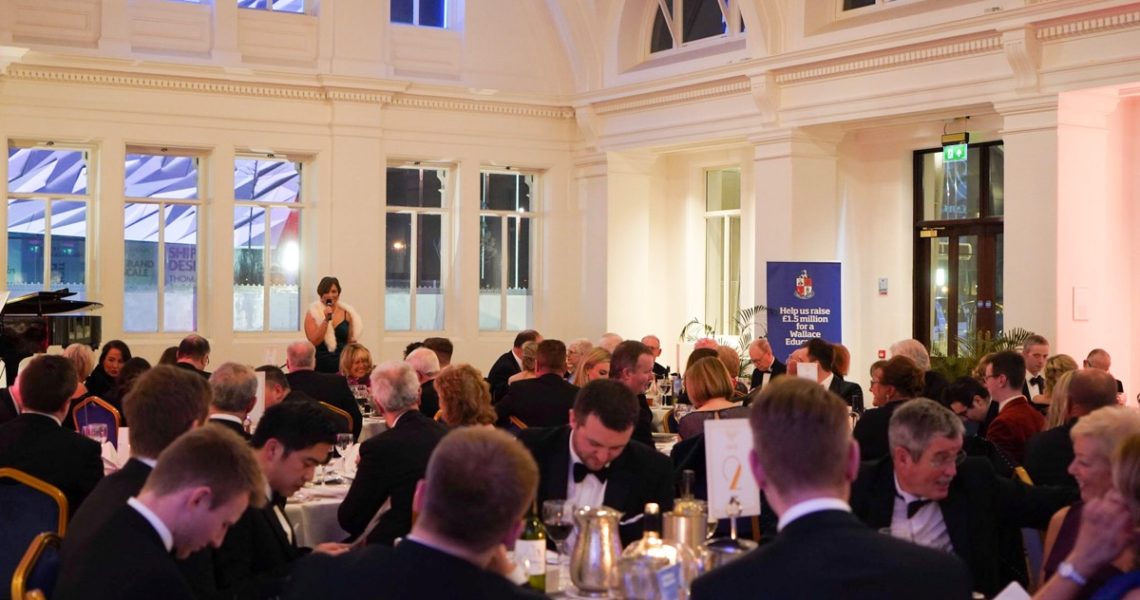 Billed as “A Musical Night to Remember” in a building echoing with memories of Belfast’s most famous ship, staff, former pupils and friends of the school attended a glamorous black tie dinner to herald the official launch of the Wallace First Campaign. Former pupil and acclaimed sports presenter Denise Watson expertly compered the evening and  fundraising committee members were delighted to welcome Ulster and  Ireland rugby star Chris Henry (Honorary President of the Past Pupils’ Association) to the event.

The evening showcased the remarkable musical talents of a range of Wallace students as the programme included such varied elements as a jazz band, a classical trio, the Honours Choir and the much admired former pupil Zoe Jackson who performed the final set of the evening. Mr David Falconer, Head of Music, had designed a programme to reflect the school’s continuing celebration of the bicentennial of its founder’s birth and the period of the Titanic’s fateful voyage. In earlier times the Music Department at Wallace had a celebrated reputation for performances of Gilbert and Sullivan’s comic operas; new life has been breathed into this tradition as the Honours Choir include such pieces as “ I am the Very Model of a Modern Major-General” in their extensive repertoire. Zoe, who reached a world-wide audience as an A level student with a haunting rendition of O Holy Night, graduated in 2018 and is currently enjoying a portfolio career which includes  some teaching of individual students in Wallace. Earlier this academic year Zoe sang in Italy; the director of the opera spoke no English! Music, like love, is clearly an international language. Zoe left the stage to rapturous applause having delighted the audience by such jazz standards as “Can’t help loving’ that man.”

Despite the elegance and glamour visible at every turn the purpose of the evening was the less than glamorous subject of fundraising. Mrs Celia Gourley OBE, chair of the Fundraising Committee, addressed the audience authoritatively on the need to “put Wallace first” as a priority in their giving. Recalling her family’s long association with the school Mrs Gourley paid tribute to the happy years she had spent there as a pupil and challenged her listeners to acknowledge the reality of inadequate government funding for the education sector which can only serve to impoverish pupils’ educational opportunities. As an illustration she noted that the full running costs of the school’s recently opened School Enhancement Project are not met by  Department of Education funding. The school, like many others in the voluntary grammar sector, is running a significant deficit.

Thanks are due to the “Wider Wallace” community for helping to make the event such a success. A wide range of excellent raffle prizes tempted guests to participate in the fun whilst a silent auction was conducted for several outstanding prizes. We are indebted to Balloo Inns, Parson’s Nose for sponsoring our star prize of a private dinner for 6 people with Jacob Stockdale; Chris Henry will also attend and host a Q&A session. Other hotly contested items were a signed and framed shirt worn by Chris during his testimonial season, a framed signed photograph of the Irish Women’s World Cup Hockey Team, lunch for two on a luxury cruise ship in Belfast and a top of the range Apple HomePod. A certain Vice-Principal remains traumatised by the experience of being outbid at the last moment!

Mrs Sandra McCabe, Chair of the Board of Governors, shares Mrs Gourley’s  experience of being a past pupil and also her passion to see the school continue to flourish. As the owner of the award-winning Oasis travel company and an enthusiastic supporter of the Rotary Club Mrs McCabe is no stranger to formals and fundraising! Speaking after the event she said:

“ I am thrilled that this evening has raised over £11,000 and that we have given the Wallace First Campaign such a great start. We are so grateful to our pupils who entertained us so well and to our former pupils Denise, Zoe, Chris and Jacob who have all given of themselves. Their affection for, and loyalty to, the school is heartwarming. In a building steeped in history we have made another part of Wallace history with this event and this campaign which we hope will enthuse our parents and our past pupils. I would like to thank Mrs Gourley for her passion and generosity and Mrs O’Hare, our current Principal, for her vision for the school’s continued success. We are all looking forward to our next event which will be advertised on the school’s social media.” Details of the campaign can be found at www.wallacefirst.org