Twenty20 may be the figure for new style cricket but Wallace High School can boast a much more impressive statistic. In a decade (2007-17) the school has supported twenty students in successful applications to Cambridge; an additional eight students have won equally coveted places at Oxford. In 2017 four students are bound for the hallowed halls of Cambridge, a university which has dominated intellectual discovery; one college (Trinity) can boast of thirty-two Nobel Laureates, the most of any college at Cambridge.

Wallace’s quartet of Emily Cairns, Katie Windrum, Andrew Coalter and Aristotle Epanomeritakis all achieved the grades required by their various colleges. Emily Cairns will read Music at Corpus Christi (where she will also be a highly prestigious choral scholar), Katie Windrum Modern and Medieval Languages at Murray Edward’s, Andrew Coalter Computer Science at Sidney College and Aristotle Epanomeritakis will read Mathematics at St John’s. The path to Cambridge is a challenging one with many hurdles to negotiate. Depending on the individual college students may have to attend one or more interviews, complete academic work on site or sit the college’s own entrance examination. A student’s work in another area of the curriculum may be requested; Katie Windrum was required to provide her AS English Literature coursework as proof of essay writing skills. Aris, despite an astonishing 5 A* A levels, was required to pass his college’s step papers. Many of Wallace’s successful Oxford and Cambridge applicants have derived great benefit from the school’s robust Gifted and Talented programme which has assisted large numbers of Wallace students to win highly coveted places on academic week long courses run by Villiers Park, the Sutton Trust and the universities themselves. Wallace’s teachers also provide academic support, extension work, mock interviews and that all important psychological encouragement. 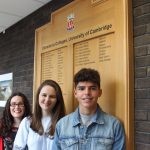 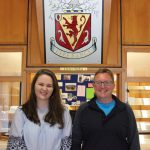 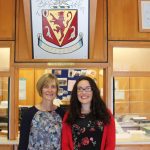 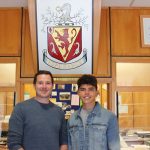 “Our 3 A* to C A level pass rate stands at an outstanding 87% which places us in the very top group of grammar schools in Northern Ireland. This feat is all the more remarkable given that many young people whose AQE lay in the 101-105 band achieved all A and B grades. Over 41% of our grades were A* and A. This means that many of our students have won places at the best universities in the United Kingdom where we are confident they will make their mark as scholars and citizens.”

Wallace can also boast of scholarly success for our sportsmen and women. Our representative male hockey players (Craig Getty, Jacob Hermon, Scott McCabe, Andrew O’Hare and Jordan Taggart) attained 100% A* to B with Head Boy Jordan attaining 4A* grades. Our girls’ hockey captain Jane Kilpatrick attained 2 A* grades and an A whilst Ulster rugby star Jonathan Hunter gained 2 A grades and a B. Rugby captain Gary Dillon capped his school career with 2 A grades and a B. Other notable Wallace sports stars in such diverse sports as netball, judo and swimming achieved top grades and their first choice university place. The rigour of training coupled with challenging school work meant these young people had to learn the invaluable skill of time management which will stand them in good stead. The Principal noted:

“We believe in holistic education and producing well-rounded young people. Our Cambridge quartet included two of our most enthusiastic contributors to the musical life of the school and our sportsmen and women excelled. Our pupils really do live up to our CORE values of commitment, opportunity, respect and excellence.”