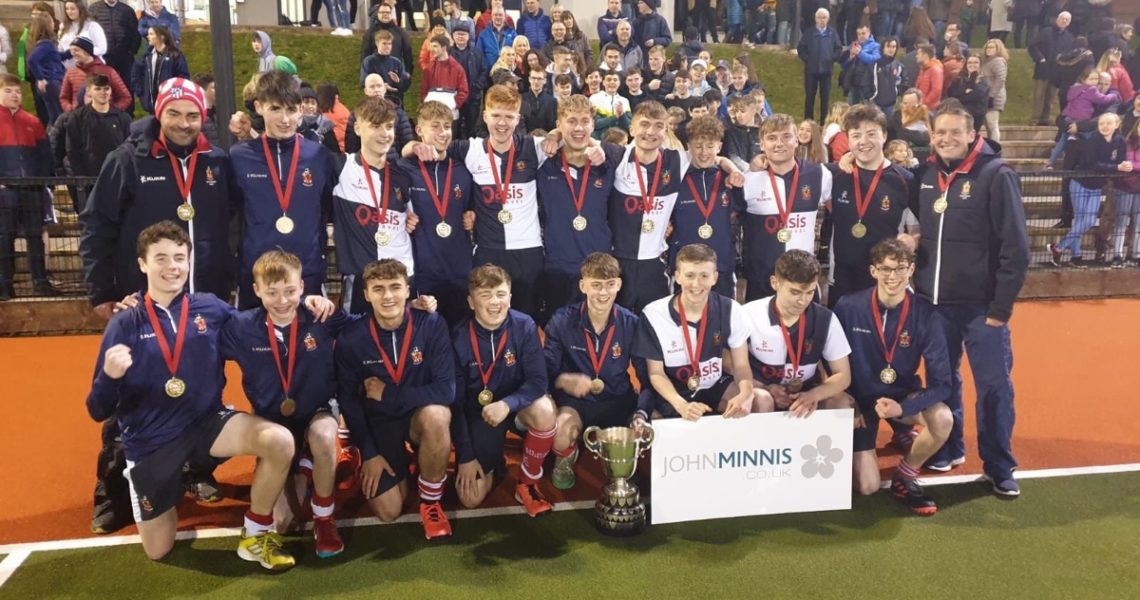 Saturday 26th January saw the 1st XI enter the Burney Cup at the second round stage and they won comfortably 11-0 against a Bangor Grammar side who had defeated them in an earlier friendly fixture. Goal scorers in this game were Troy Chambers (4), Ben Clarke (3), Jonny Lynch (2), Max Taylor and Oliver Patterson.

Wallace started the semi-final on the front foot and took an early lead from another Chambers penalty corner rocket. Despite conceding to Banbridge after twenty minutes in the first half, a Lynch penalty corner left Wallace going into the second half with a deserved 2-1 lead. Goalkeeper Ben Cooke again came into his own saving two Banbridge penalty corners and a penalty stroke before Chambers and Thomas Cherry scores to leave the final score 4-1.

The final took place last Thursday night under floodlights at Stormont in front of a large and noisy crowd. Wallace again started the game on the front foot and were rather unlucky to go in at half time only one goal up, Chambers with another trademark penalty corner. He also saw a drag flick rebound to safety after hitting both posts, whilst Max Taylor was unlucky to see two “goals” disallowed, whilst Cooke again made several important saves to keep the Sullivan forwards at bay.

Oliver Patterson finished expertly on the reverse side to extend the Wallace lead early in the second half after a free flowing move involving Cameron Forrest and skipper Lynch. With twenty minutes to go all looked good, before seven minutes of madness saw a tremendous Sullivan fight back and three goals to leave the Lisburn school behind for the first time in their entire Burney Cup run. This deficit looked set to remain the same but, with only twenty seconds left, Taylor intercepted a Sullivan pass, before combining with Ben Clarke and Lynch and finally applying the finishing touch himself for a last gasp equaliser.

The Wallace players had practised run ins during the build up to the game and were confident in their ability having won the McCullough Cup in December by the same means. Chambers scored first for Wallace, with Cooke saving the first Sullivan effort. Clarke and Lynch both scored for Wallace, as did the next two Sullivan players to leave the score 3-2 after three efforts each. Taylor then missed, with Sullivan scoring to make it 3-3 with one each remaining. Forrest remained calm to score and when the Sullivan player missed, the Burney Cup was coming back to Wallace for the third time in six years, a tremendous achievement.

Reflecting on the win, proud coach Gareth Kidd commented: “What an absolutely unbelievable night which showcased all that is good in schools’ hockey.

Credit to Sullivan for an incredible comeback and also to our lads who kept going to the very end of the game. They showed real courage to score that equaliser with 14 seconds left on the clock which is indicative of their never say die attitude. That’s now three big games which we have won on run ins this year. We’ve practised them a lot and that shows when it comes to scoring under pressure. We also have a goalkeeper, Ben Cooke, who shines with his ability in shootouts.

It’s an unbelievable way for our four Year 14 players to end their school hockey careers and I want to commend our captain, Jonny Lynch, vice captain, Zach Benson, alongside Adam Clarke and Thomas Cherry for all they have given Wallace hockey over seven years. It hasn’t always been easy but they’ve stuck at it through thick and thin and ended up winning a rare double in their final year.

To win both major cups is a tremendous achievement for our school and reflects on a dedicated coaching staff throughout all year groups. I especially want to thank my assistant coach, David Simpson, for all his efforts this year and he has been an integral part of the success. Thanks to Ulster Hockey, sponsors John Minnis and our own staff and supporters who came out in large numbers tonight to create a brilliant atmosphere. Finally huge congratulations to our players. Not only excellent on the pitch but great ambassadors for Wallace off the pitch as well.”

The under 15 squad have enjoyed a tremendous year losing only one game during the entire season. Their Richardson Cup journey started back in January with a solid 4-1 win over RBAI at the Dub. Matthew Chambers scored an excellent hat trick, with Todd Benson chipping in with the other goal.

Bangor Grammar School were their next opponents and another good performance saw a well deserved 7-1 victory. Chambers was again on the score sheet with two goals, with Daniel McElhinney and Harry Robb also scoring two apiece. The other scorer in this game was Alfie Shanks.

As with the Burney Cup, the semi-final opponents were the always excellent Banbridge Academy with Wallace travelling to Havelock Park on a sunny March day. Harry Robb was the undoubted  star of this show with four goals with Daniel McElhinney complimenting an excellent individual performance with a well executed penalty corner deflection to leave the Wallace lads victorious in a 5-4 thriller of a game.

The final was played at Stormont last week in front of a large and enthusiastic crowd and Wallace put on another tremendous display to run out 3-0 winners with the goals scored by Matthew Chambers, Pierce Thompson and Harry Robb. Captain Paddy Watson, who also starred for the 1st XI in the Burney Cup final, deserves mention for a faultless and classy performance at centre back, whilst for coach Mr Neal McKnight it was a special day as he had won the same trophy twenty five years ago as a player.

All involved with Wallace hockey wish to thank all pupils, staff and other supporters who travelled to the finals at Stormont last week, many of whom have not missed any matches this season. Thanks also to 1st XI sponsors Oasis Travel for their continued backing and to Four Star Pizza for the free pizzas supplied to the 1st XI last Thursday night.