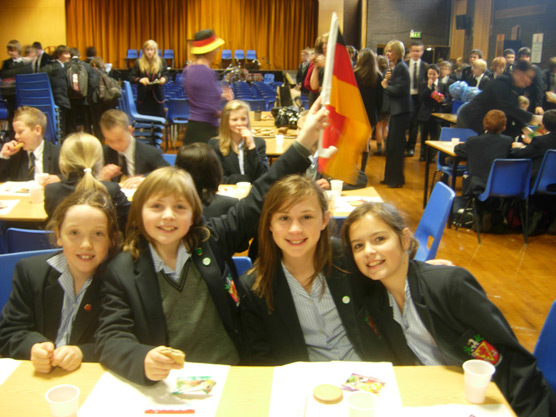 A whole range of different activities took place to celebrate the European Day of Languages 2010 at Wallace during the week of September 20.

Year 8 pupils were invited to a German break and had great fun learning some food vocabulary and phrases. Year 9 pupils designed some very colourful posters, promoting the learning of languages, which were displayed around the school.

In Year 10 pupils created story boards, as part of a UK wide competition designed to promote learning languages known as the LAFTAs (the Language and Film Talent Awards). The best 3 will be made into a 2 minute film clip and entered for the competition.

Y11 students completed a European jigsaw and students in Years 13 and 14 participated in morning assemblies and taught French, German and Spanish lessons in Harmony Hill Primary School. Their preparation and enthusiasm were described as ‘exemplary’ and the staff of the primary school were most impressed by their friendliness and excellent manners.

Another very enjoyable and successful week of activities to celebrate the European Day of Languages at Wallace High School.