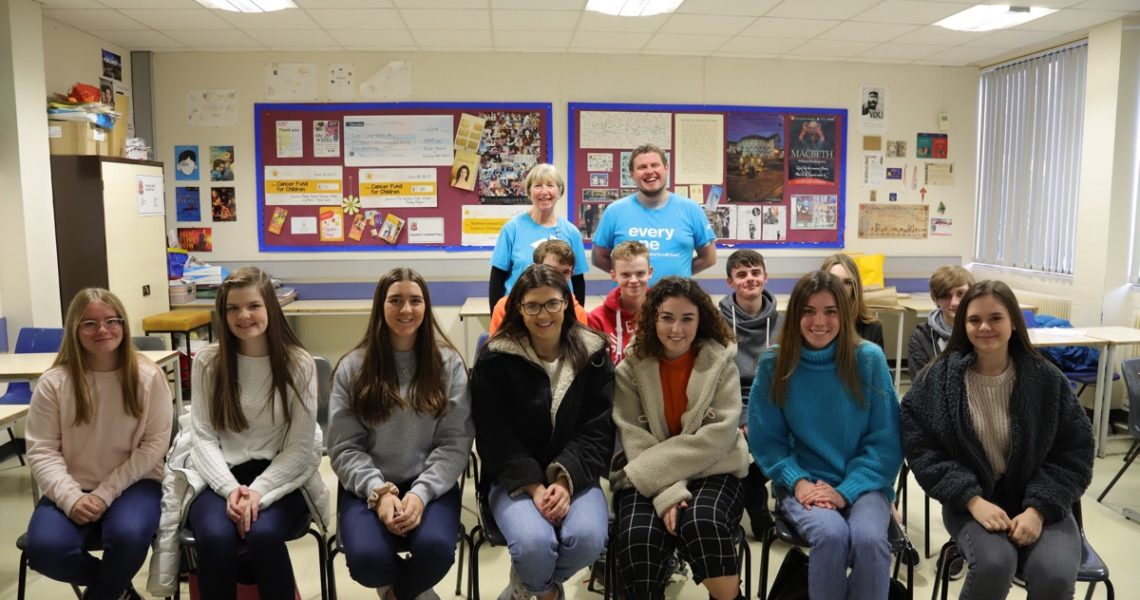 Twelve Year 13 students have volunteered to participate in the Habitat for Humanity Change Makers Project which will see pupils in Northern Ireland help to fund the building of ten houses in Malawi. Our partner school is Fort Hill Integrated College and each school has a fundraising target of £1250.

The students enjoyed their first workshop session led by Pete ( who works for the charity) and Mary who is a retired teacher and volunteer; the initial session introduced Habitat’s vision of “A world where everyone has a decent place to live”, provided an inspirational series of examples of the charity’s work in championing the cause of the under-privileged and explored how the work of the charity has evolved over the decades.

The half-day session saw the students participate in a range of activities designed to deepen knowledge and encourage empathy. In a quiz session the world’s population was reduced to a representative 100 people and the students had to guess the percentages involved…needless to say there were a few wild guesses! Interestingly, only 9% now lack access to clean water (a huge tribute to the dedication of charities working in this area) but 22% have no shelter. The students were stunned to hear that 0.00000003 % of the population own 50% of the world’s wealth whilst 11% will be under-nourished. Food for thought!

The Giant Step Forward game encouraged empathy as each student had a character card and responded to a series of statements. The game illustrates inequalities as some characters were unable to move forward at all; Abbie, who found herself in this plight, openly admitted to feeling jealous of others and frustrated by the sense of powerlessness.

The final session addressed stereotypes regarding homelessness and Pete shared the sobering fact that Northern Ireland has the highest rate of homelessness in the United Kingdom; sofa surfing, shelters, staying with friends all contribute to the situation as rough sleepers represent only 6% of those who “need a place to call home.”

Inspired and enthused by all they heard the students are eagerly anticipating the next stage of the project which will see them volunteer for a day at the Habitat ReStore building to experience the charity B&Q style store for themselves. Thinking caps (rather than hard hats) will be donned as we tackle our fundraising challenge determined to play a role in putting a roof over a Malawian family’s head.