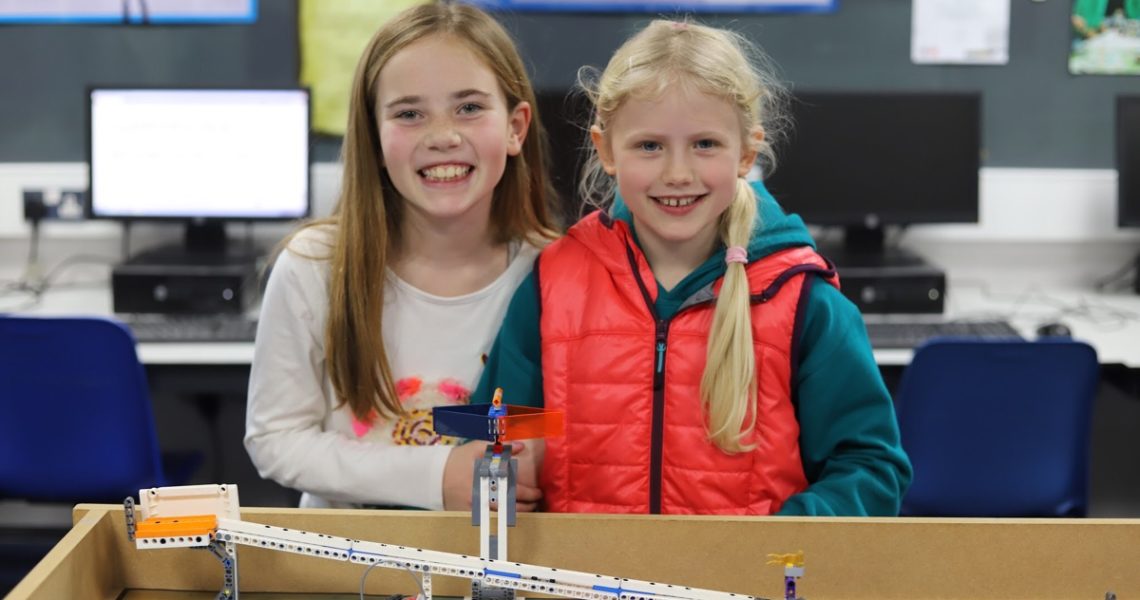 “New beginnings” and “Realising Ambitions” caption the 2019 Wallace Prospectus ; thousands of eager visitors  arriving at the Open Morning event saw and heard these themes explored. Many had visited the school in previous years but this was their opportunity to see for themselves the completed £3.5 million School Enhancement Project.

The new wing makes a striking architectural statement and has provided exceptional accommodation and facilities for Art, Moving Image Arts and Nutrition and Food Science. Light, bright and airy ( and air conditioned to boot!) the spacious classrooms provided an inspirational environment for young visitors who enjoyed the chance to feature in the iconic expressionist painting The Scream by Edvard Munch, practise their Harry Potter wand skills and pause to eat scrumptious scones.

Something new was also evident as visitors marvelled at the “Smart Environment” (masterfully demonstrated by Vice-Principal David Cleland) which has been generously sponsored by local companies. Hey Siri replaced Hey Sir and pupils are already programming control algorithms; staff have innovative activities planned and the facility cements Wallace’s reputation as a leading school in ICT provision. Crowd-pleasing experiments are a must and Biology, Chemistry and Physics did not disappoint; who knew that you could increase the size of pupil favourite the gummy Haribo? Sadly, increase in size equals decrease in taste! Leaping flames and “not for the squeamish” activities never fail to excite young visitors and equally the opportunity for some “dressing up” in the History Department (marauding Viking anyone? WW1 nurse?) was not to be missed. Literature selfies, aided by a range of fun props, proved a big hit in the English Department where an Indian flavour could also be found as the Department hosted a fascinating exhibition of the school’s involvement with the charity Asha. Over £40,000 has been raised since our inaugural trip in 2014.

The Strength and Conditioning Suite (a key element of the SEP) was “heaving” as legs pumped vigorously on bikes and rowing machines. Punch balls were pummelled and a generation of sports-loving former pupils, now prospective Wallace parents, sighed with envy at the state-of-the -art facilities. In the sports hall a range of challenges fuelled competitive spirits and the extra-curricular fair in the gymnasium demonstrated the wide range of opportunities available.

Opportunity was a theme which emerged in the Assembly Hall presentations as Principal Deborah O’Hare, Head Girl Beth Crane, Year 13 student Anna Trimble and Year 8 pupils Lottie Hegarty and Jon Rodgers addressed attentive audiences. Community, opportunity and progress are available to all in Wallace and the sheer enthusiasm of the pupils when describing their school experience shone through. Mrs O’Hare spoke of her pride in being the Principal of “this great school”, detailed the academic and sporting highlights of the previous year and summarised the philosophy of the “Wallace Way.” 2018 was the bicentennial of the birth of the school’s founder, Sir Richard Wallace; the presentations concluded with “Wallace facts” as Beth, a prize winning public speaker and member of the Youth Parliament, tried to share as many facts as possible in a minute and Anna attempted to keep count!

“Open Morning is a favourite event for me. It is a pleasure to welcome prospective new pupils and to see former pupils return as parents to the school. I am always delighted to see the genuine enthusiasm of students as they act as guides and demonstrators; their commitment is our most persuasive argument about the nature of this school. Jon summed Wallace up as “open” and we treasure the diversity and inclusivity of our school family. As Principal I am thrilled that Lottie said “encouraging” as it is a wonderful testimony to my teachers and the Wallace Way as an ethos.”

The 2019 Prospectus can be downloaded via this link