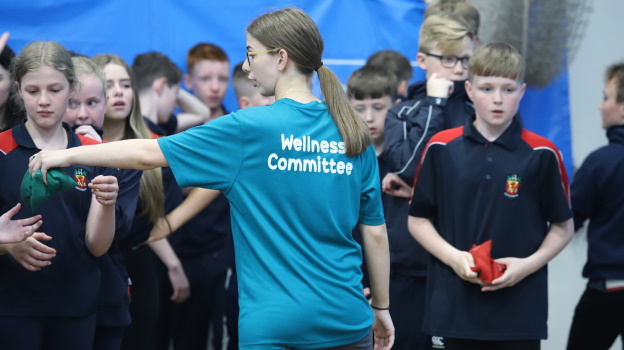 We had to move events indoors.

Were we disheartened? No! Our Wellbeing Day saw the school overflowing with energy and laughter as the pupils enjoyed a range of activities and challenges which left them energised and upbeat. The organisation of the day required military precision and precision was delivered. A colour coded rota/timetable miraculously saw pupils and staff in the right places at the right times culminating in the live streamed finale.

Sessions were classified as music therapy, active wellness, mindfulness and team challenges and all pupils rotated in a carousel format to each activity. Thanks to the Duke of Edinburgh’s Award scheme we could provide tents which formed the basis of one team-building exercise.  The dramatically named “Bomb Disposal” had pupils itching to get started as they had to remove an “active” bomb from a 4m square grid using only ropes, a bungee cord, a boiler suit and a snooker cue. What’s not to like?  The professional music therapists who facilitated the sessions on the power of music were so dynamic that the staff were singing their praises and there’s no audience as hard to please as teachers!

Music played a key role in the day with a live streamed finale featuring pupils from Years 8-11. The Year 8 students opened the show with considerable enthusiasm; the Year 9 students exhibited impressive musicality. The junior choir earned warm applause for their rendition of When You Believe but the stars of the show were undoubtedly Mr Falconer and  the Year 11 students who rocked the assembly hall with The Lion Sleeps Tonight. Mr Falconer even got a significant percentage of the audience singing and moving…no mean  feat!

The finale was ably compered by members of the Wellbeing committee who spoke empathetically about the potential challenges facing young people and outlined their plans for next year. Listening to the pupil voice is core to the work of the committee and they will be looking for feedback on this venture. The conclusion to the afternoon was twofold. First, the raffle prizewinners were announced live on stage with former pupil, mother to a Year 8 and Principal of Bangor Grammar Mrs Elizabeth Huddlestone winning the top prize of two season tickets to Ulster rugby. Rather fittingly Mr Gibson, who is organising the Lego League trip to Brazil, won …a suitcase. A tremendous total of £2620 was raised and will be divided between mental health charities, including Alzheimer’s research, support for the Lego League team and health/education projects in the slums of Brazil.

The crowning moment of the day for a few lucky pupils was Wallace Wetness when randomly selected pupils got to throw wet sponges at a number of members of staff. Either their aim was poor or they were just too polite but we had more misses than bullseyes!

Speaking at the close of the event Mrs Davison thanked her “dream  team” of a committee, her colleagues for their support, the maintenance staff for logistics and the saints of ICT ( Colin and David) who so patiently and good naturedly tolerate the endless questions and requests from the staff.

“This has been a great day and on behalf of all of you I want to thank Mrs Davison and all her committee for all the hard work which has gone into making today such a great success. Everything she is doing is to help and support you and I hope we can all show our appreciation to her and to the committee.”