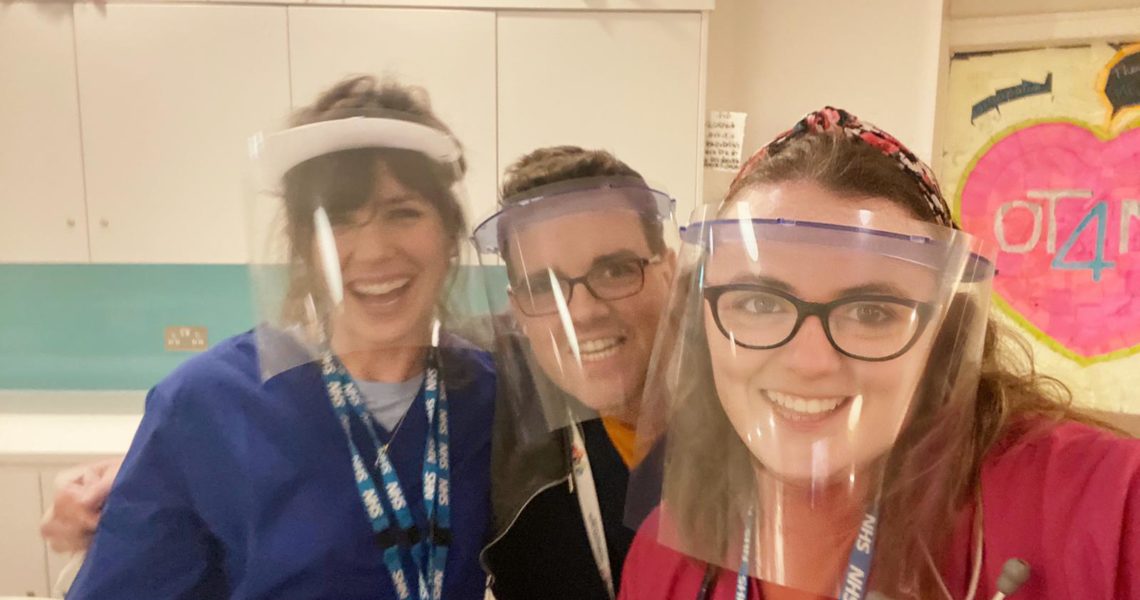 WHS support for NHS heroes celebrated by media and politicians

If television’s most famous Alan (Sugar not Partridge) chanced to see any of the media coverage surrounding Wallace’s Alan Monteith he would assuredly utter that famous line “You’re hired!”

Head of Technology Alan Monteith, in common with Vice-Principal David Cleland, first joined the Wallace family in the 1980s when both arrived as Form One ( Year 8 in the new money) pupils; both taught briefly in other well-known grammar schools in Northern Ireland before returning to Clonevin Park. Alan has been the driving force behind an initiative to produce PPE in support of the NHS and other frontline workers.

To date, Alan and his departmental teaching colleagues Kylah Palmer and Stephen Calvert and technician Sid Murphy have received 2182 requests for visors; the 1,000 visor was collected on Easter Monday. Such is the dedication of the Wallace staff that they have worked unceasingly over the Easter break and have been supported by a rotation of other staff members who have volunteered to clean, pack and deliver the visors.

David Cleland has co-ordinated the data, requests and collection/delivery arrangements with invaluable support from IT technician Colin Napier and Head of Maintenance Colin McCutcheon. Alan’s visor design and plans have been made freely available by request to other institutions who wish to follow Wallace’s lead in supporting the NHS and other sectors.

In interviews with local media Alan has been at pains to stress how other local schools have supported the Wallace initiative; Friends’ School, Belfast Royal Academy, Down High School and the Boys’ Model have assisted by providing materials or cutting units. Even the ladies of the local WI were involved when there was an elastic crisis!

Local MLA Robbie Butler took to Twitter to commend Wallace and both the ETI and the Children’s commissioner retweeted the offer of plans and instructions. The Wallace efforts also featured in the Belfast Telegraph, BBC Newsline and a live interview on U105  with Frank Mitchell when Alan gave a characteristically modest account of his role within the project.

To date the bulk of the requests have come from hospital doctors but we are honoured to have supported the NI Ambulance service, the hospice, a number of local pharmacies and nursing homes in addition to dentists, opticians and care workers. Wallace had previously donated a large number of safety goggles for use by local health workers.

A staggering £6650 has been donated on the Just Giving Page where the comments are as generous as the donations; “ That’s the Wallace spirit” is perhaps the most accurate summary of the entire project but the pride expressed by both our own former pupils and the wider community have been a real encouragement to Team Visor.

“There are many unsung heroes in this process which has significant back office support from the wider school staff. Our founder, Sir Richard Wallace was a generous philanthropist and it is only fitting that we continue in his footsteps to help wider society.”

“ These are strange times and it is brilliant to see so many people pulling together to help. We are genuinely all in this together and it’s a privilege to know that we are helping to support the NHS. Some of our own former pupils will doubtless be wearing Wallace made visors and we are immensely proud of their service and commitment to others. Aside from my own departmental colleagues I’d like to thank other staff members who’ve given of their time and my wife and daughter also came along to help.”

Team Visor will be continuing their highly efficient production line to process the continuing demand and donations are still welcome. All surplus funds will be donated to the NHS.