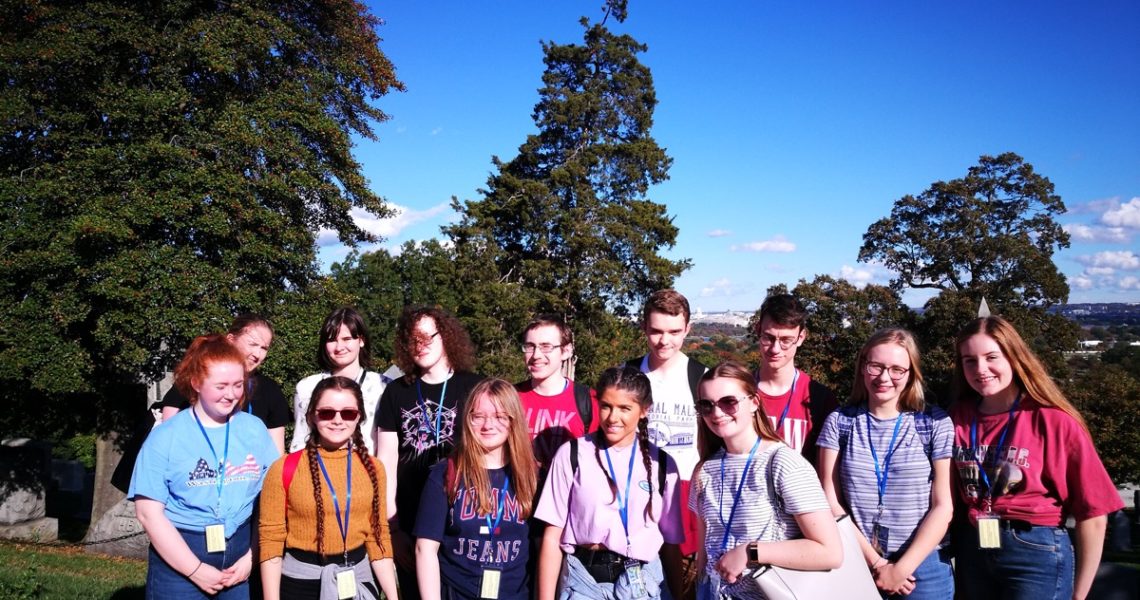 The privations and terrors experienced by those who journeyed to the USA in earlier centuries bear little resemblance to the experiences of today’s pilgrims. An intrepid group of Wallace sixth formers, accompanied by the redoubtable duo of Miss Frey and Mr Armstrong, recently went on their own American adventure.

After much planning and packing our trip to Washington DC 2019 was finally upon us. With eager hearts and fond farewells from parents, our journey to Washington DC began with a short coach journey to Dublin Airport. Following a very long queue in pre-clearance for US customs, we finally departed. After multiple movies on our eight-hour long flight we sped into Washington city centre and our hotel for our duration in DC. Shattered from a very long day we gained much needed sustenance at the local McDonalds (other fast food outlets are available.)

Following a fitful night’s sleep for some (who was snorer of the trip?)  we prepared for the day at the “All you can eat” hot buffet before venturing out to meet glorious blue skies; the weather forecast had declared the day ahead was to be bright and warm.  We traversed Massachusetts Avenue towards Capitol Hill; the home of American democracy and the Houses of Congress can be found within an awe inspiring, domed white marble building, adorned with the statue of freedom. Our tour took us through the crypt, the centre of the city, the artistic masterpiece of the rotunda and the ornate house chambers.  We were also fortunate enough to be able to gain access to the gallery above the House of Representatives.

After Capitol Hill we made our way to the exceptionally ornate Library on Congress. This glorious building hosts the impressive Thomas Jefferson library, as well as a great display on women’s suffrage and early American history.  We then made the short journey across to the hallowed halls of the US Supreme Court.  Here we discovered the vital role played by the court in US politics and its crucial function as the ultimate interpreters of the US Constitution.

Departing Capitol Hill we headed westwards down the National Mall to the National Archives to marvel at the treasures within as the collection preserves the original documents which formed the bedrock of the United States political system.  The archives house the Declaration of Independence, the US Constitution and the first ten amendments, known as the Bill of Rights.  It also has a copy of the legendary Magna Carta in its collection, created in 1297.

Despite weary feet we visited Ford Theatre made famous (perhaps notorious?) following the assassination of President Abraham Lincoln. We subsequently headed to Chinatown for food and onward to Wal Mart for some much needed retail therapy. A short plod home returned us to the sanctuary of our hotel and an early night.

Our second full day in Washington proved to be an early start for Jay, Matthew and “Sir” (Mr Armstrong) who queued up for tickets for the Washington monument before the sun came up.  However, it was worth every moment as the views from this historic monument were truly breathtaking.  Following the Washington monument the group made its way to the very evocative and harrowing Holocaust Museum; immensely powerful and emotive content takes visitors through the full spectrum of the Nazi persecution of the Jews using a variety of large exhibits to illuminate the horrors of the Holocaust.

Following a short respite for lunch we began the tour of the memorials with our brightly clad guide, Cecilia. The engaging and informative tour would take us from the Washington Monument, past the Vietnam War Memorial and then to the Lincoln Memorial. As we basked in the glorious sunshine and shielded our eyes from the bright marble monuments we learnt about the importance of these memorials in the American psyche, grasping such mysteries as: why no statue was to be taller than the statue of freedom at the top of the Capitol (19.5 feet); why no building should be taller that the Washington Monument; why Lincoln’s statue depicts the two sides to the president and how the Vietnam Wall of Remembrance proved so controversial in its creation.

After a short break to take in these iconic views we proceeded down the southern side of the mall.  Our first stop was the powerful rock structure depicting the legendary African -American leader, Dr Martin Luther King Jr. who seems foreboding and powerful as he overlooks the Potomac tidal basin.  Carrying on with our tour we walked through the memorial to President Franklin D Roosevelt (so famous his initials are sufficient!) and his wife, Eleanor. His place in history is unique as the only president to be elected four times. FDR’s time in office is immortalised across the three main terms of his office; these included the aftermath of the Wall Street Crash, the New Deal and entry into World War Two.

The last memorial on our tour was that of Thomas Jefferson. This domed edifice houses the statute of one of the founding fathers and framers of the constitution. Jefferson’s memorial was only built in the 20th century and was controversial in its construction as two thousand cherry blossom trees were cut down to build it.  These would later be replaced as over two thousand new trees were sent by the Japanese nation.

Following a quick stop at the White House for a photo opportunity (well, you have to pose sometimes) we made our way north to Franklin Square for dinner; then it was straight back to the hotel to bathe some worn out feet.

On Sunday we enjoyed a much deserved lie-in and lazy breakfast before taking the metro. Sadly, we had to change our original plans as the weather took a turn for the worse and rain storms ravaged Washington.  However, safely ensconced in the impressive Pentagon City Mall containing hundreds of stores and eateries, our arms grew heavy with the weight of many new shopping bags! Two stops along the metro line brought us out at Arlington Cemetery which was very busy as it is the starting line of the annual Marine Corps marathon.

The Cemetery is the final resting place of tens of thousands of US military veterans, dating back to the Civil War period. Formerly the home of the Confederate General, Robert E Lee, Arlington is now more famous for the changing of the guard at the tomb of the Unknown Soldier and JFK’s Eternal Flame.  The Cemetery is still a fully functional military burial site and it awes visitors with its peaceful tranquility and sea of white grave stones stretching as far as the eye can see. Heading back to our hotel we reflected on witnessing such poignant sights.  A quick journey out for pizza was followed by yet another early night and some packing for our journey home.

Monday started with a group breakfast out and proved a fitting start to the final day of our tour before commencing our long journey homeward. With full stomachs we made our way back down to the National Mall towards the American History Smithsonian Museum.  This huge three storey building houses some of the most important artefacts in America’s short, yet vibrant, history. It depicts the expansionist nature of this vast country, its variety of cultures, music, ideas, inventions, the bat mobile and even the enormous star spangled banner which dates back to the 1800s.

We left the museum to head north towards the Northern Ireland (NI) Bureau. This bureau operates essentially as a diplomatic mission for NI.  Currently operated by two senior civil servants, it tries to encourage co-operation between the USA, as well as Canada with NI.  They work collaboratively on matters such as cross-community issues, cyber-security and tourism. We had an excellent and engaging Q&A with Richard Cushnie. We learnt about the valuable work of the Bureau, his own career pathway, what it is like to live in Washington and the challenges the Bureau faces with Brexit and the lack of a functioning NI Assembly.  We also enjoyed a delicious lunch courtesy of the Bureau.

With heavy hearts, fond memories and tired limbs we made our way back to the hotel to make our transfers back to Dublin.

Safely back on the familiar soil of Lisburn Mr Armstrong expressed his thanks to Miss Frey for her patience and enjoyable stewardship, Richard Cushnie from the NI Bureau for hosting the group and the superb Nicky Thornton from Oasis Travel who organised all travel and accommodation arrangements.