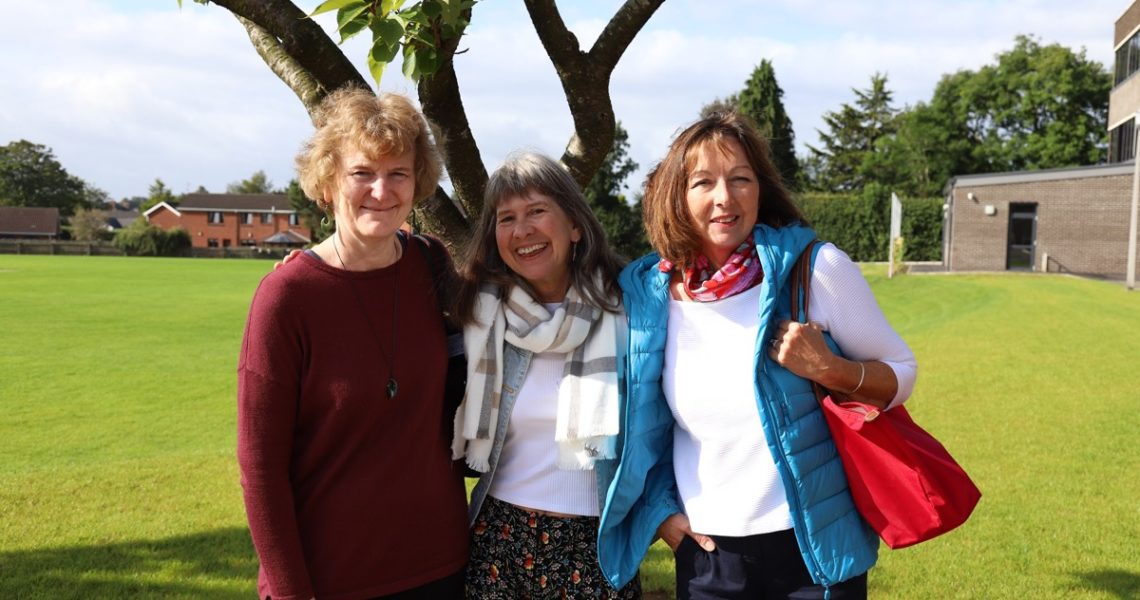 Some Wallace former pupils take reunions seriously and few have matched the commitment of recent visitors Fiona Gordon (now Crummey) Head Girl 1979, Alison Finlay and Rose-Marie Ferguson. The trio now live in New Zealand, England and Norway respectively but in June 2018 they decided to recreate something memorable from their shared past…part of the route of their Gold Duke of Edinburgh expedition. Suitably equipped the ladies met up on a glorious sunny day to walk Binnian Loop, celebrate the 40 th anniversary of their 1978 triumph (or perhaps trauma?) and reminisce about Wallace days.

September 2019 saw the trio reunited and making a nostalgic visit to Clonevin Park. Fiona was in Lisburn for a family occasion and was accompanied by her brother Owen also a former pupil now resident in New Zealand. Inevitably, memories were shared: carrying the desks up Clonevin Park when the move to the “new school” occurred, Bill Wilson’s words of wisdom “There are no plugs in the Mournes” and “Just keep putting one foot in front of the other”, trying to avoid O level French by deliberately failing the third form (Year 10) examination only to be foiled by the teacher’s straight-faced equivalent duplicity…apparently the paper was lost and the form average accordingly awarded! No escape from French! The ladies also recounted a previous visit to the Principal’s office (no coffee and scones on that occasion) when they were reprimanded for some high spirits which involved a rope, a tree and a pupil!

The visitors were hugely impressed by the very significant changes to the school since 1979 such as “The Link” ( the area used to be open!), the Sixth Form Centre and our most recent addition, the School Enhancement Project but were also delighted to see that aspects of the school such as the Assembly Hall and the Boyd Sports Hall remained reassuringly familiar. Christmas Pie was the subject of several vivid anecdotes not to mention the pupil who gassed himself in a Chemistry class!

Reflecting on their visit and their memories Fiona, now an educational psychologist, noted: “I think we always knew we had attended a great school. Coming back really makes you appreciate just how good an education we had and how positively it shaped our lives. It was great to bring back memories and see the changes.”