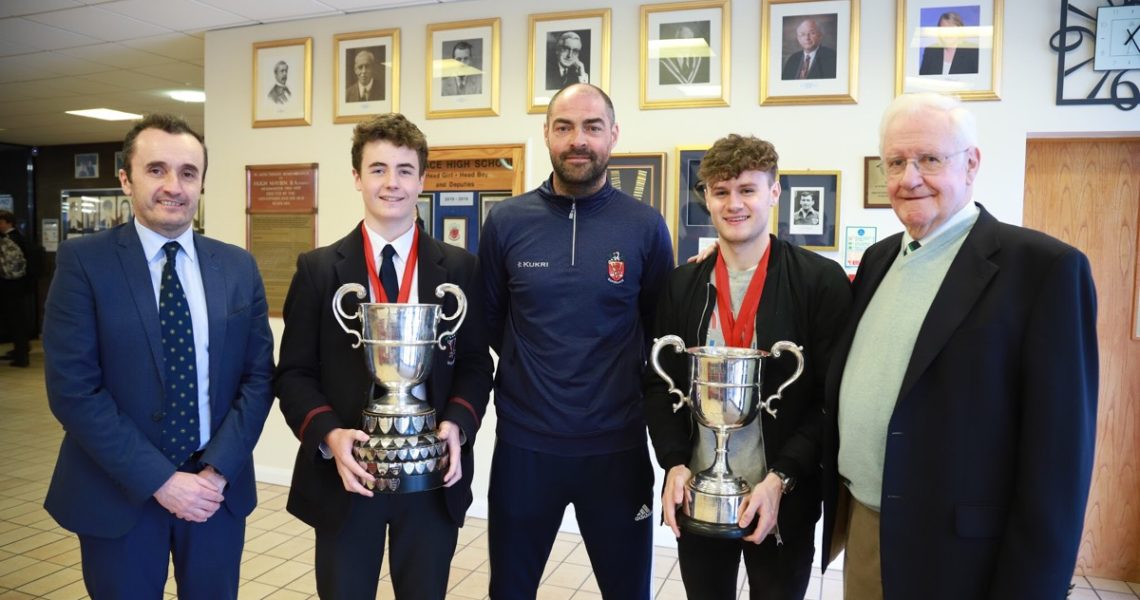 Is there a hockey gene?

Max Taylor was the hero of the hour in Wallace’s recent Burney Cup triumph as he scored a last gasp equaliser against Sullivan Upper in a final which was never anything but compelling viewing. Max’s starring role is just one more chapter in a remarkable story of the history of boys’ hockey at Wallace which connects three generations.

Max’s grandfather Mr Girvan Pelan played for Wallace’s first ever boys’ hockey team almost seventy years ago. Visiting the school recently Mr Pelan recalled how the game was introduced to the school by History Teacher Mr Ken Hood in 1951-52; Mr Hood had played hockey in India during World War Two. PE teacher Mr Gareth Kidd who has coached Wallace teams to remarkable levels of success was delighted to see a photograph of that initial group of hockey enthusiasts who played their first match in Donegal against Prior School, Lifford losing only by a narrow margin ( 2-1) in a tightly contested game. The second match was in Belfast against RBAI when Wallace lost the game (2-0) but third time lucky saw the team gain their first victory on Donegal soil as they defeated Royal and Prior School 1-0.

Mr Pelan’s son in law Jonny Taylor holds a distinguished place in Wallace’s hockey hall of fame. As a pupil Jonny played a key role  in completing the “holy grail”  of schoolboy hockey as Wallace triumphed in “the double” winning the McCullough Cup and the Burney Cup under the watchful gaze of history teacher Mr Howard Thompson in 1988/89.

Step forward the “young ones” and Mr Pelan can boast not one but two grandsons who have achieved “the double”. Currently completing his second year of study at Queen’s University,  Max’s cousin, Jacob Hermon, paid a return visit to Wallace for a photoshoot with his family and couldn’t resist the opportunity to don his medals and pose with the trophies he helped the school win in 2014. The vagaries of Brexit permitting, Jacob will be completing a semester in Europe next year under the Erasmus scheme and no doubt hockey will be both played and watched. As a schoolboy Jacob played for the Ulster and Irish under 16s, the Ulster under 18s and he is currently training with the Ulster under 21s.

Max is currently playing for the Ulster and Irish under 16s and since last year ( at the tender age of 15) also for the under 18s and while Dad Jonny’s playing days are ( largely) over he retains his enthusiasm for hockey and is currently Chairman of South Antrim Hockey Club. The boys don’t hold exclusivity on the game in this family circle as current pupils Louise Hermon and Maddie Taylor are also keen hockey players. We look forward to the further development of this family sporting history.