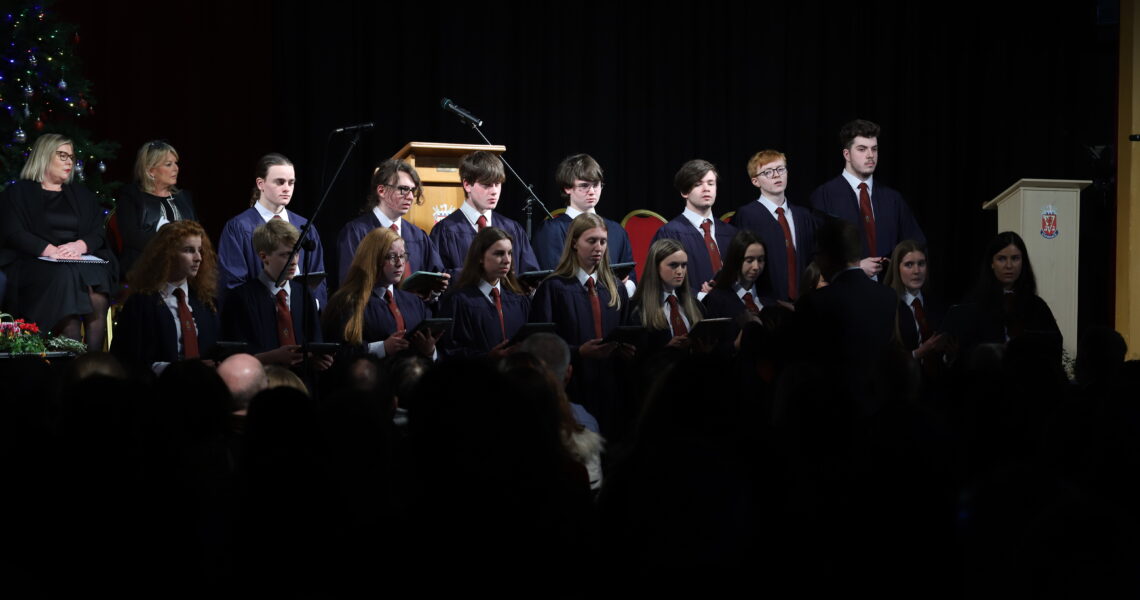 Senior Prize Day back with a “Powerful” message for all!

Jamie was Deputy Head Boy in 2010 and is currently a lecturer in History and Politics at Queen’s University, Belfast. Welcoming Jamie back to school, Wallace’s Principal, Mrs Deborah O’Hare did not spare his blushes  quoting sections of the reference she had written for his UCAS form. Described as “competitive and talented” Jamie was identified as academically outstanding and praised for his brilliant contributions to the European Youth Parliament (the team won the Northern Ireland Regional Final) and to the World Wide Quiz (Geography) when he represented the United Kingdom!

The Principal’s report traditionally outlines major achievements in Wallace in the preceding year but Mrs O’Hare began by paying tribute to the leavers of 2020 and 2021 ( sadly, known as the Covid cohort) who missed the opportunity to celebrate their success on such an occasion. Noting record breaking GCSE results Mrs O’Hare highlighted the superb statistics for the year group of 180 pupils as 60% of all grades achieved were at A*/A ,  almost 90% of all grades were at A*/B and an impressive twenty two students achieved 11 A*/A grades. Almost eighty pupils had 8 or more A*/A grades and a staggering 137 pupils achieved 8 or more grades at A* /B. At A2 level the grades awarded were based solely on the public examinations completed in 2022 so it was especially gratifying that an amazing 54% of all grades awarded to our 2022 leavers were A*/A.

Outlining many of the activities thankfully reintroduced in the year 2021-2022 Mrs O’Hare praised how the school’s CORE values ( Commitment, Opportunity, Respect, Excellence) are so embedded in the school’s life at every level: sport, creativity, academic competitions and philanthropy are all pursued with enthusiasm and zeal.

As increased concerns about wellness have been a by-product of the Covid-19 pandemic, the Principal detailed the extensive and innovative work spearheaded by Mrs Wendy Davison in ensuring a pupil-led focus on well-being. A committee ( primarily Year 13 pupils) completed training in a number of areas and organised assemblies, fundraisers and a Wellness Club which has been very well received. The committee had organised a visit from Carl Frampton MBE who shared his own experiences of challenges to his mental well-being and reflected on the need for resilience.

The Principal also shared her enjoyment of another celebrity’s visit as Jacob Stockdale had spoken at Scripture Union sharing core messages of humility, faith and resilience.

Resilience featured in Jamie’s speech also as he shared with the large audience his experiences of what he called Plan A, B and maybe even C. Describing how he changed direction from his original plan when he discovered that he didn’t like the course, the highly prestigious university and London as a place to live Jamie urged the listening audience to be willing to take a “scenic route” and embrace the twists and turns which characterise such an experience. Developing the metaphor of a scenic route Jamie reminisced about a literally scenic location- Vancouver, British Columbia- where he completed post-graduate study. The university’s motto is the brief Latin phrase “Tuum Est” which can be translated “It’s yours” but also “It’s up to you” thus simultaneously offering a sense of security  and of challenge as we can both take but also strive to create, shape and change circumstances, situations and ourselves. In his conclusion Jamie articulated his personal interpretation of the school’s motto “Esperance”  noting the hope he had felt when his vertically challenged Year 8 self arrived in Clonevin Park and told his listeners of the hopes he had for them:

“ I know that you’re going to go on and do amazing things for yourselves and the world around you. It’s yours and it’s up to you.”

As always, Senior Prize Day was enriched by the musical contributions of our students. This year’s event had a poignant opening as the audience watched a brief film, recorded live at our Carol Concert in Saint Patrick’s and edited by Vice-Principal, Mr David Cleland. Featuring Mrs Maeve Falconer as soloist her rendition of O Holy Night, in affectionate remembrance of our former colleagues JP ( Paddy) Harrower and Colin McCutcheon, was awe-inspiring. The Honours choir contributed the seasonal sacred O Little Town by Chillicott and the Jazz band provided two foot- tapping show-stoppers All I want for Christmas ( Mariah Carey) and Jingle Bells (arranged Buble) which certainly provided a festive feel.

Speaking after the event the Principal said:

“ It was such a pleasure to be able to hold a Senior Prize Day, our first in three years. It is a celebration of the excellence of staff and students and a testimony to our individual-centred approach. Congratulations to Mr Jonny Reid and his team responsible for the event. There is a huge amount of unseen, unsung preparation for such an event and I thank all involved sincerely. It was inspiring to hear such a wonderful address from Jamie and to see the pride in the faces of his former teachers as they listened to him.

Thank you also to our Chair of the Board of Governors, Mrs Sandra McCabe, not only for her remarks and presence today but for her unwavering devotion to Wallace and all it embodies.”