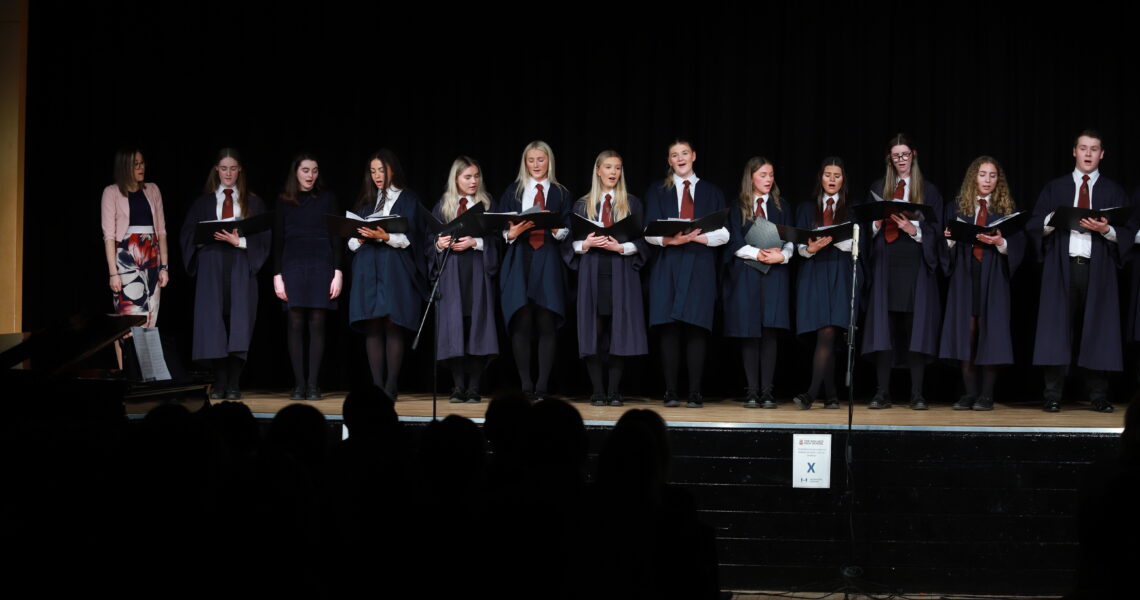 The sounds of Spring

Wallace’s assembly hall rediscovered not The Sound of Silence (to quote a famous duo) but rather the sounds of orchestra, piano, jazz, close harmony, soloists, Mr Falconer’s enthusiasm and very warm applause. The Spring Concert was our first since 2019 as the Covid -19 pandemic had claimed live music as one of its innumerable casualties. Returning to performance was a great thrill for the staff and pupils and a clear delight to the enthusiastic audience.

In a programme that covered diverse elements, many countries of origin and a range of languages one element connected all the items and performers-a visible excitement that there was an opportunity to play and sing…maybe even to bop and improvise! The concert began with a large orchestra under the baton and tutelage of Miss Chelsea Pascoe and dynamic renditions of two evergreen pieces, The Dambusters’ March and The Avengers. Whilst variety of content definitely provided spice, Mr Falconer had planned the programme to showcase many of our senior pupils and in particular our Year 14 leavers; these highly accomplished performers had not delighted an audience since they were fresh faced Year 11 pupils! A series of senior soloists showed the sophistication of their repertoires as instrumentalists and singers with classical pieces (Nocturne Opus 37, O mio babbino caro, O del mio dolce ardor) show tunes (If I Loved You from Carousel) and personal compositions (La vida en la oscuidad  by Katie Scott, One Hundred minus one by Oliver Heath) the latter being one of a series of pieces based around AA Milne’s stories.

The entire evening was characterised by a sense of gentle nostalgia and a theme of moving on as the Jazz Band delighted with Ev’ry Time We Say Goodbye, Capella tootled their way through I’m a train, James Falconer posed the question Whither must I Wander? (Paris in his case!) and the Year 14 students performed the now traditional last item of a Wallace Spring concert That Lonesome Road by Grohlnik with its evocative lyrics “Don’t turn your head/Back over your shoulder”.

For many present there was a looking back to so many happy occasions celebrating the musicality of our gifted students but equally there was a looking forward as we celebrated the sheer size of the orchestra and anticipated more musical delights next year, not least a concert on September 21st.

Warmest congratulations and thanks to our choirs, soloists, virtuoso pianist Peter Glenn, the orchestra and a one man sound and lighting expert Isaac McIlwrath. Thanks are also due to Mr Falconer and Miss Pascoe who never fail to communicate their passion for music and performance. We look forward to welcoming a capacity crowd again in September.