Yes, we heard the people sing!

Can you hear the people sing? A familiar phrase from an iconic show, Les Misérables, echoed around Market Square as on a balmy summer evening Wallace pupils paid their tribute to the iconic figure who shaped, indeed transformed, the landscape of Lisburn and whose legacy continues to be inspirational. The ancients believed in weather gods who could be tyrannical, fierce deities who punished relentlessly; they smiled, shone and beamed on the hundreds of pupils who sang and played a programme so diverse that it included iPads, pop music (albeit the near operatic Bohemian  Rhapsody) a polka for Lady Wallace, virtuoso instrumental performances and the choir of Parkview Special School.

#RW200 (Richard Wallace 200) has become a branding linking Lisburn and London, the Wallace High School and The Wallace Collection, London with the shared aim of a triumphant celebration of the bicentennial of the birth of Sir Richard Wallace. The city of Lisburn has mounted an exhibition mirroring a special exhibition in London and the presence of Sir Richard was tangible through the imaginative linking device used throughout the concert. The concert ran seamlessly with a mellifluous voiceover pre-recorded by Robin Mansell and full of meticulously researched details, not least a speech on education which referred to Sir Richard’s distribution of prizes on a school prize day; his words of exhortation still have moral value as he urged his young listeners to always do their duty. 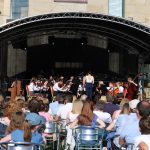 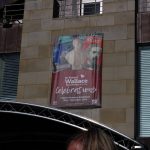 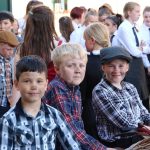 It was an evening of delightful cameos, choreographed to perfection. The sights and sounds will linger long in the memory: little children running into the fountains, shrieking in delight as Handel’s Water Music opened the formal proceedings counterpointed by grown men surreptitiously wiping away tears at Ave Maria and a flawless solo piece from The Greatest Showman sung with total conviction by Lewis Gregg of Parkview School. Cantabile, Wallace’s acclaimed junior choir, appeared in costume, waving tricolours with faces aflame with revolutionary zeal and appropriately begrimed.

The concert reflected the life and times of Sir Richard with pieces from Gilbert and Sullivan (Fair Moon to thee I sing and Modern Major General) expertly sung by the highly accomplished James Falconer whilst his younger sibling Nicholas sang Where is Love? from the musical Oliver, the latter forming part of a superb medley delivered by Wallace’s Preparatory Department pupils. Local interest pieces were also to the fore to reflect Sir Richard’s role as MP for Lisburn as the Junior Chamber choir sang The Gartan Mother’s Lullaby and The Star of the County Down; former pupil, Kathryn Wardil’s delicate arrangement of My Lagan Love, sung by the Honours Choir, was a further link to Lisburn and the associated theme of water. 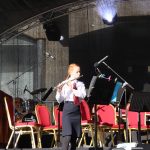 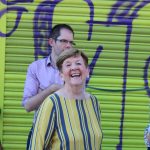 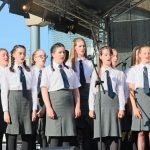 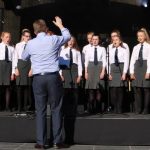 The location of the concert gave the event a “Proms” style atmosphere and it was certainly standing room only as audience members flocked into Market Square. A local restaurant did a brisk trade in ice-cream of many flavours if the swiftly melting cones represented authentic evidence; some hardy souls even ate chips in the heat! The school was immensely indebted to LCCC for its expert support in providing staging and security because as noted by the Principal “Events like this require a great deal of planning!”

Prior to the rousing finale Circle of Life, sung by all participants Mrs O’Hare said:

“This has been a wonderful night for Wallace High school and a wonderful night for Lisburn. I cannot single out individual performers because they were all marvellous but I do want to stress how delighted we are with our collaboration with Parkview Special School.  The pupils, both singers and signers, have added immensely to the evening. I do want to thank the many Wallace staff here tonight who have been working on this project alongside the choir and orchestra directors but very special thanks are due to Mrs Davison and Mr Alexander for their work with Cantabile and innumerable thanks to Miss Pascoe and Mr Falconer for this tour de force of an evening. “Wallace forever” was the cry which greeted Sir Richard on his arrival in Lisburn and that is how I feel about this great school which I have been privileged to lead for the past nine years. I know that this concert will be a night to remember for all its participants and it has been our joy to celebrate aspects of our founder’s life with all of you. 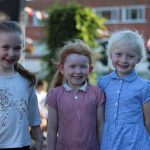 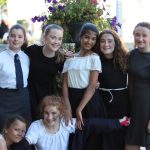 If you attended and enjoyed please feel free to show your appreciation by a donation to our water project.  Donations can be made directly to the School or via the my donate page:
mydonate.bt.com/events/whsdelhihope