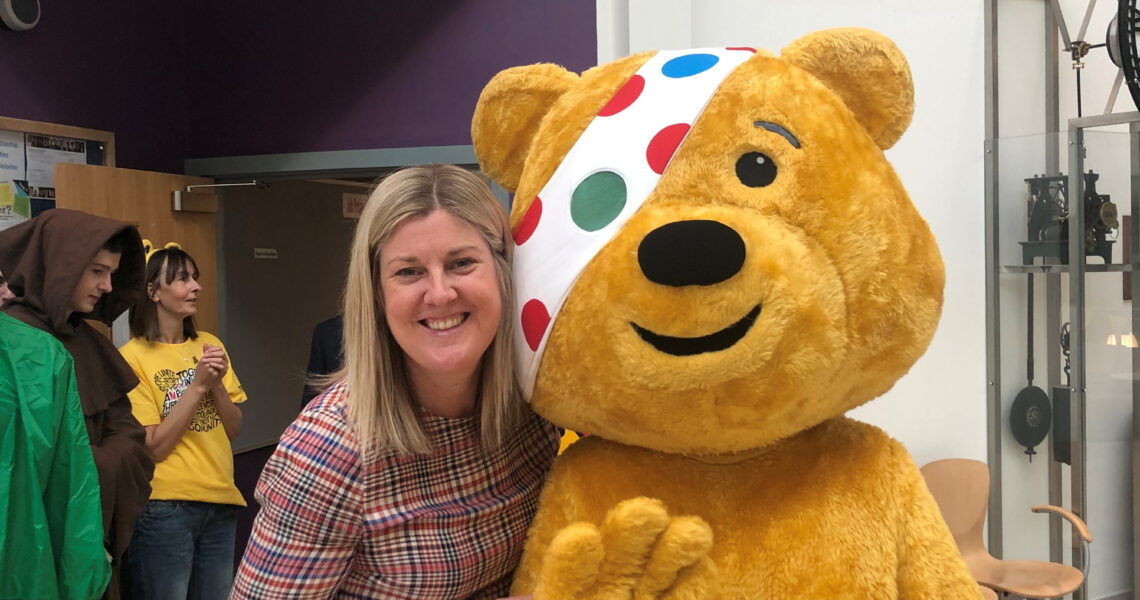 Continuing with our series Wallace Women we introduce Elizabeth Huddleson, current Principal of Bangor Grammar school where, in her own words, she is “mother” to nine hundred boys and possibly some staff members also. As Elizabeth Bryans she was capable of a level of exuberance which fitted her well for later life.

What did you study at A level at Wallace?

I studied Economics, English Literature and Music.  I always LOVED English Literature so that was an easy choice to make.  Music – I had studied Piano and Theory of Music outside of school, so again, a subject I had a level of awareness about.  As for Economics, it was chosen more so because I was one of those pupils who really was left with few options as I had made some wrong subject choices at the GCSE stage.  Instead of taking subjects that I had a natural talent for like History and Art, I pursued a science route, probably as a result of being overly influenced by the subject choices of my friends and not helped by the fact that I really had no idea what sort of career I wished to pursue, when making the first set of important subject choices at Year 10.

It is a piece of advice I have always given my pupils – if you are unsure, study subjects you are good at and enjoy!

Retrospectively though, I doubt completing English Literature, History and Art at A level would have led me into teaching.  Maybe things do actually happen for a reason after all?

I do not have many stand out memories in terms of being particularly brilliant at any one sport or standing out academically as one of the routine prize winners or ‘academic mafia’ as they are affectionately called in the school where I work. Most of my memories relate to laughing a lot and having fun! My best memory though involves one of my favourite teachers.  Mathematics was most certainly not my forte and having had the legend that was Mrs Yamin-Ali in junior school (who by some miracle managed to get me from one of the bottom Maths sets up to M1), I found myself being taught by Mr McCallan for GCSE Mathematics.  At that time, he was the Vice Principal in the school and as is often the case, when you have someone in a position of responsibility who becomes your teacher you see them in a different light.  As a pupil I developed a very positive working relationship with Mr McCallan, compounded by the many additional hours of support he provided because I was always ‘that child’ who could not grasp the Maths concept!  His patience truly was endless.  By the end of Year 11, Mr McCallan had been promoted to the position of Principal and we were assigned a different teacher – a loss lamented by the whole class as we all had such a positive rapport and working relationship with him, which probably explains why I did not end up in an after school detention for the following …

At some point in year 13, I was out of class.  In transit to my destination I was sliding down the bannister.  As an aside, anyone who has been a pupil at WHS will know just how awesome those bannisters are for sliding down. The smoothness of the surface, coupled with the fabric of the much maligned “wheelie bin” school skirt, made for a speedy descent!

The bannister in question was the one that ends opposite the doorway into the entrance into the Principal’s office.  As I was ‘mid-flight’ the door opened; out walked Mr McCallan!  In my absolute horror and haste to get off the bannister, I completely lost my balance, came flying off the end and careered into him with full force, knocking him completely off balance!

Readers who knew him will remember ‘the look’.  Needless to say I thought I was in for the telling off of my life and readied myself for the ‘hairdryer treatment’.   Instead, thankfully, he started to laugh and told me to stop ‘being an eejit’ and get back to class.

It is one of those memories which still makes me smile and quietly giggle decades later.  Given my current role, when I catch a pupil doing something daft, I remember Mr McCallan and try to air on the side of good humour.

Undoubtedly, the importance of not giving up and believing in yourself.   I was not what I would describe as ‘an academic’.  Learning and absorbing information did not come naturally to me and I truly had to work hard to achieve any semblance of a good mark.  Some of the teachers were instrumental in developing and instilling self-belief and building confidence.   Along with Mr McCallan, names like Olwyn Herron, Grace Bill, Liz Ramsey all spring to mind – nurturing, caring, encouraging.

What are the greatest challenges and greatest joys of your work?

The greatest challenge is keeping multiple plates spinning given the different responsibilities that come with being a School Principal, whilst being a mother to 900 boys and also having the right balance of time for the 1 girl in my life – my own daughter!

The greatest joy is undoubtedly working with young people, boys in particular who in general are immense fun, witty, endearing and warm hearted.  Hopefully the nature of the job I do allows me to make a positive difference to the lives of these wonderful young men.

What advice would you give your 18 year old self?

I would say to my Upper Sixth self:

Professionally – joining, what at the time was a very male dominated and traditional all boys’ school when appointed to the position of the Pastoral Vice Principal in 2008.  I was the first female to hold a senior management position in the school and it took time for me to become established, ‘learn my trade’ and to be accepted and respected for the job I was doing.

Personally – most certainly the pure and undiluted joy that comes on a daily basis with being ‘mummy’ to a funny, kind and amazingly talented young lady.