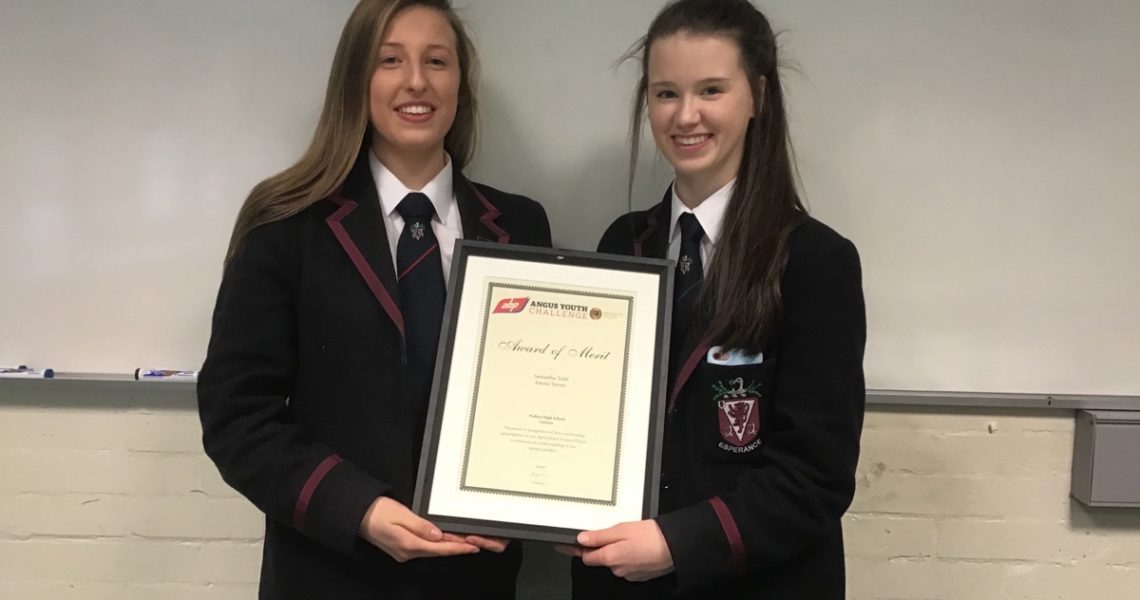 Ever thought that interest in cattle was exclusively the preserve of men and probably middle aged ones at that? Wrong! In an exciting competition designed to engage young people step forward two Year 11 girls, Samantha Todd and Emma Turner who entered the ABP Angus Youth Challenge earlier this year. Wallace’s unfailingly witty Vice Principal Mr David Cleland had at least one group of assembly attendees believing the school would have cattle grazing in our school grounds; should the girls win the cattle will have a rather more tranquil home on a family farm…much to the disappointment of staff and pupils!

Initially over sixty schools entered the competition with teams of between two and five pupils. The challenge involved preparing a short video to demonstrate understanding of the ABP Food Group, plans for the promotion of ABP, knowledge of the Aberdeen Angus breed and aspects of rural and farming life. The second stage featured the top sixteen teams who travelled to Loughry College where they experienced a shortlisting interview; teams were quizzed regarding the ideas presented in their video and the panel members also enjoyed meeting the competitors in person. The third stage marked a reduction to thirteen schools (clearly no superstitious panel members!) and involved the teams creating a stand at Loughry College outlining their ideas and plans. Should the girls progress to the next stage of the competition Samantha and Emma will have the opportunity to rear and manage five Aberdeen Angus calves. The panel included an executive from the business community, a vet, representatives from ABP Food Group and experts on the Aberdeen Angus Breed.

Nail biting as this experience may have been the girls are still waiting patiently for the results which will be announced in April. Head of Geography Miss Barbara McKee commented:

“Samantha and Emma have displayed inspirational enthusiasm for this competition and produced outstanding resources for their stand at the College. Hopefully, there will be good news in April and everyone at Wallace is very proud of the girls’ achievements to date.”