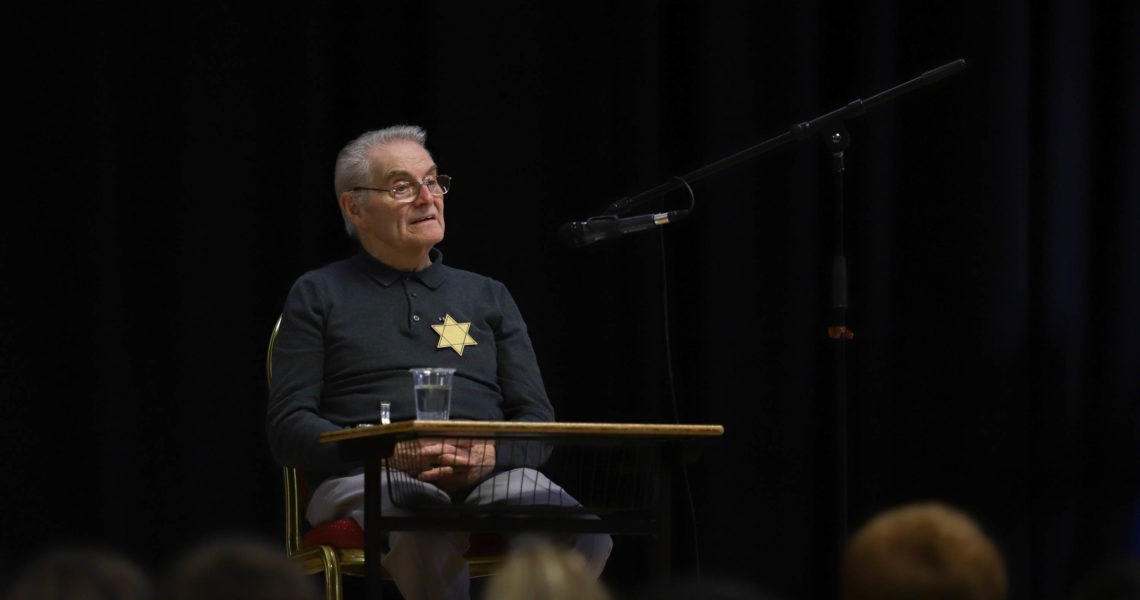 Harrowing Reminder of the Holocaust

On Wednesday 16th October, Wallace was very privileged to welcome Holocaust survivor, Tomi Reichental; to date he has visited over 500 hundred schools and spoken to over 100,000 young people.  Tomi addressed a packed Assembly Hall which included all of Year 10, Year 14 students and staff.

The Wallace pupils were pleased to be joined by pupils from Friends’ School Lisburn and Fort Hill Integrated College for this memorable experience. Tomi was remarkably eloquent; his talk was moving and harrowing as he recounted childhood experiences.

Tomi was born in Czechoslovakia in 1935 to Jewish farmers and lived with his family on their farm until he was eight. During this period laws were introduced prohibiting the movement and rights of Jewish people so he and his family went into hiding.

Unfortunately, Tomi, his mother, his brother and his grandmother were caught and taken to Bergen-Belsen concentration camp in 1944 where they stayed until the camp was liberated by the British in 1945.

Bergen Belsen concentration camp had been taken over by the SS in 1943 and was initially used for holding hostages to be exchanged for captured German soldiers.

It would house thousands of Jews, as well as Soviet army prisoners. Designed only to hold 10,000 persons, it had 60,000 prisoners by April 1945.  Due to overcrowding, terrible diseases such typhus and dysentery amongst others, spread quickly killing thousands.

Tomi is well-known and celebrated for his autobiographical talks about his experience of the Holocaust; he is one of only three Holocaust survivors currently residing in Ireland. He speaks in secondary schools, colleges and at various other events across the country with the aim of educating  others about the atrocities of the Holocaust so that we can remember those who died in it and make sure it never happens again: “After all the horror, I am doing my best to keep the memory of those lost ones alive. We – you, me, your children, and my children – must never forget.”

Tomi has lived in Dublin since 1959. Close to Evil, a documentary about Tomi’s attempts to meet one of his jailers, has been shown on TV and in cinemas throughout the world thus helping yet again to remind us of what we must never forget- the evils of the Holocaust.

Tomi was also invited to launch Wallace’s participation in the Crocus Project in conjunction with the Holocaust Education Trust Ireland; yellow crocus buds will be planted to remember the yellow Star of David worn by the Jews during World War Two.

The project’s focus is to plant one million bulbs to remember the one million Jewish children who died during the Holocaust. Wallace’s bulbs will be planted by our Year 11 students and will hopefully be in full bloom by the nationally marked Holocaust Memorial Day on 27th January.