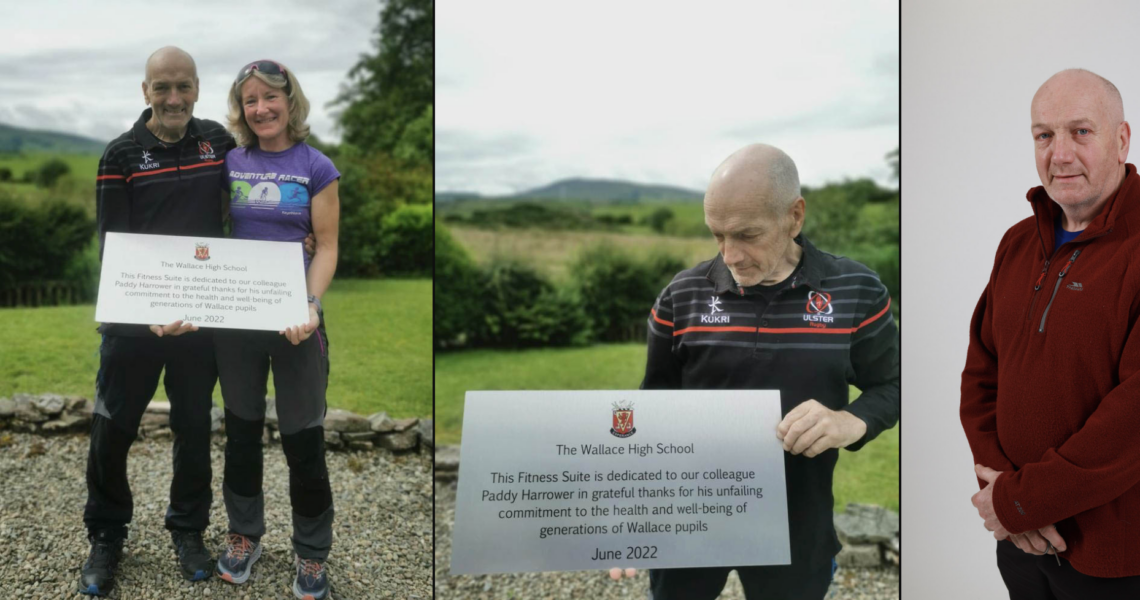 “I need hardly say that it will be my earnest desire to make a full contribution to the life of the school.”

Were any words ever more apt? From his initial appointment as a teacher of PE and Geography Patrick (affectionately known as Paddy) served generations of Wallace pupils providing challenge, support and inspiration along the way. Famously economical with words “pleasing Paddy”  became a game many pupils enjoyed playing with the aim of getting him to crack a smile or even laugh!

Given his legendary record of commitment to Wallace it may seem a little ironical that his grammar school education was as a “wearer of green”and  his school career pays testimony to both his love of sports and the respect he clearly won from staff and pupils alike. In 1972-1973 Paddy stood over FSL like a colossus as he was Head Boy, Captain of Rugby, Captain of Cricket, Senior Athletics Champion and (not surprisingly) the holder of colours in each of these areas. He was also a Northern Ireland international athlete specialising in the javelin event.

After ‘A’levels Paddy completed an honours degree in Geography and Geology and over the years quite a few members of staff were grateful to receive one of Paddy’s meticulously drawn maps to guide them safely to a destination. Paddy completed his PGCE at Loughborough and his reference from the school where he completed teaching practice included the observations:

Paddy’s former Head of Department, Mr WE Greene, was responsible for overseeing what was then known as the “probationary year” and the young teacher’s passion for his role was evident:

“ Mr Harrower will be found on the school premises most afternoons until after 5.30 either coaching rugby or basketball or generally supervising badminton, table-tennis etc. In addition to these after school activities Mr Harrower comes in early on Tuesday to coach the U13 basketball team before school starts. I feel that such time given after official school hours, speaks for itself.”

If Paddy was committed he also showed initiative as in the same document Mr Greene noted:

“ Mr Harrower sees what needs doing and does it without being asked. He is a great help to me.”

Throughout his time as a teacher, Head of Department and coach Paddy brought his famed efficiency to every task. Sports Day was made infinitely less stressful by Paddy’s clipboards which meticulously detailed (for those ignorant of such matters) where you measured from, how you measured, what you measured and what was a no throw or jump! His notebooks recording fixtures, scores and “points of interest” are a treasure-trove of fine detail and he applied the same approach to organising trips and tours. In December 77 he agreed to run a ski trip to Italy in 78 and his enthusiasm for skiing never left him despite managing to sustain a serious knee injury on a school trip in the 90s.

Paddy contributed much to sport outside of the school as he was Captain of Lisburn Rugby Club 1981-2, a Level 3 referee for the IRFU travelling the length and breadth of Ireland for over a decade, an AAA Assistant Club Coach (throws) and even Fitness Coach for the  Banbridge Ladies’ Hockey teams 2000-2002. Paddy also showed a keen interest in the development of PE as an academic subject working for the examinations board, CCEA, where he served as a specification and resource writer, examiner, reviser and Principal Moderator.

In recent years Paddy  managed the school’s fitness suite, supported the Head of Maintenance with some supervision/ caretaking duties and provided the administrative support for the AQE examinations. Paddy’s legendary eye for detail helped to ensure that the mornings ran like an expensive Swiss watch and it was greatly appreciated by our External Examinations Officers Dr McMath and Miss Pascoe.

Paddy knew to the day and hour the length of his service to Wallace and its quality was unchanging. The same initiative that Mr Greene noted in the young teacher was always in evidence. Paddy simply got on with doing things that needed to be done. As a teacher and a coach he modelled good practice before the term was coined. He gave every individual personal attention and considerable encouragement, he used humour effectively and he built an atmosphere of disciplined enjoyment. Enjoyment of all varieties of sport was encouraged and despite his reputation for being the “strong silent type” Paddy had daily conversations with Head of Maintenance, Mr Colin McCutcheon, about whatever was current in sports news. He was also immensely proud of his wife Andrea’s prowess sharing stories of her Iron Woman challenges and of his two sons’ most recent sporting achievements.

Paddy would doubtless have shrugged his shoulders at the suggestion that he inspired pupils but to use one of his own favourite words he “absolutely” did.

He modelled commitment and excellence on a daily basis, he consistently tried to offer new opportunities and he earned the respect of his pupils, his colleagues and the wider community. As noted on the plaque of the Fitness Suite Paddy showed unfailing commitment to the health and well-being of generations of Wallace pupils. He faced his diagnosis with the strength of character we knew so well and respected so much and we are delighted he completed his final Wallace project last week which was to name his Rugby and Cricket All Stars. There is no truth in the suggestion that the current Head of PE offered a bribe for inclusion on the list!

We offer our deepest sympathies to Paddy’s much loved wife and sons and to his family circle. We will all miss our strong, silent, kind and principled JPH.