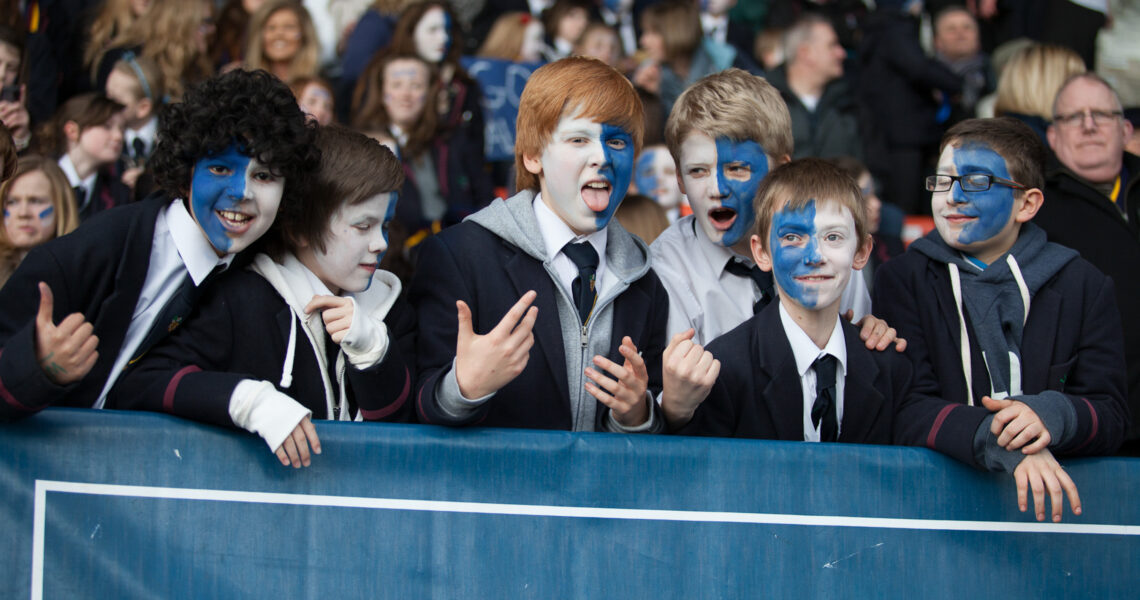 It is consoling that on what proved to be his last day in Wallace, Colin enjoyed some “craic” with many members of the teaching staff, walked the corridors and completed a task to his own exacting standards. It was precisely the type of task Colin liked to do himself because he wanted to be sure every sign was aligned to perfection and positioned perfectly!

Colin was appointed to the position of Head of Maintenance in 2005 having worked in the shop-fitting industry. In his application for the post he had noted:

and his references identified the traits of character which would come to be respected by his Wallace colleagues:

“Colin is well-organised both on site and in his office procedures and is respected by his colleagues and our clients. He takes pride in his work and expects others to work to his own high standards.”

Every summer the school buildings would look, in Colin’s words, “like a building site” and every year, by late August, order would have been restored and the school improved in visible ways. The summer of 2022 saw the refurbishment of the English department on the ground floor and History on the top floor. New floors, new blinds, new desks, chairs and fresh new paint saw transformed classrooms with just a little touch of Colin’s OCD (his phrase!) as discreet blue dots appeared towards the top of walls to ensure staff aligned their blinds to perfection. Truth to tell, this was a Marmite addition with the occasional rebel refusing to reach Colin’s standards but he always did his best to keep us in shape. A delightful new area for Year 8 was another highlight of the year even if Colin felt the need to tap the top row of lockers with a rubber hammer to address a largely imperceptible deviation from a straight line!

Colin’s impeccable eye for detail proved invaluable during such capital works as the “smurf turf” and the building of our SEP (School Enhancement Project) which saw the school enhance and modernise its facilities. The JP Harrower Strength and Conditioning Suite is the envy of other schools whilst the Art, Food and Nutrition and MIA are exemplary facilities in their size and styling. As the architect observed “Nothing escapes Colin” but in their turn all the contractors and suppliers paid tribute to Colin’s commitment and professionalism in ensuring that the school delivered on its responsibilities. If the bricks of our main school building bear the DNA of former Headmaster, Mr Noel Gilpin, the School Enhancement Project bears Colin’s and it will stand as a lasting testimony to his passion to deliver 100% for Wallace.

Covid-19 brought unparalleled complexities to the safe management of pupils, staff and buildings and we were blessed to have Colin to navigate us safely through the storms. If the management of miniscule details was the key to the safety and wellbeing of the school family we could not have had anyone more attuned and more alert. It was Colin’s exceptional handling of Covid 19 from the initial announcement of the pandemic, through the phased return to school and the day to day responding to government data and regulations that kept us so safe as a school.

Colin liked to be in the background and he sought neither admiration nor praise. He worked to his own exacting standards and he expected others to emulate them but as a genuine leader he asked of no-one what he would not do himself. If he had featured on Catchphrase his catchphrases were “No problem” and “Leave it with me” the latter usually meaning very swift completion! Colin loved school life even if at times the teachers tested his patience; the words “These are meant to be highly educated people” occasionally passed his lips, accompanied by a touch of eye-rolling.

In common with those other great stalwarts of Wallace life, Bill Wilson and JPH, Colin left us too soon. As a trio they had so much in common: the ability to move chairs, desks or pictures by a millimeter; the ability to let out a “gulder” that would shock even the boldest; the desire to be the very best they could be; a love of all things Wallace.

In James Kerr’s celebrated book Legacy, (Lessons to learn from the All Blacks) he refers to the concept of Whakapapa which he illustrates by the concepts of planting trees you’ll never see, leaving “the jersey in a better place” and writing your legacy. In his work Colin connected the past, the present and the future of the school. If, as GB Shaw noted life is a “splendid torch” which we have “hold of for the moment…to make it burn as brightly as possible before handing it to future generations” Colin can rest in peace knowing he passed an Olympian flame.