It is a truth universally acknowledged (amongst teachers) that the summer is always in June and September. Almost 9 years later it is hard to remember if it was sunny in the September of 2007 but the disposition of the new addition to the Biology Department certainly deserved that adjective.

Jill came to Wallace in the early stages of her professional life having taught for the previous two years; her first job was a maternity cover in Belfast High School which was followed by a year in Saintfield High School. 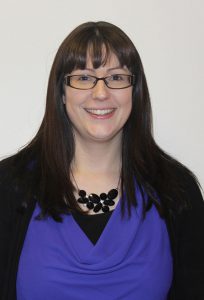 She quickly established herself as an outstanding young teacher with a professional assurance far beyond her years. Creative and diligent in her approach to teaching both Biology and Chemistry Jill swiftly won the liking and respect of pupils and colleagues alike. Teaching was in Jill’s DNA.

As a student she had participated in the Tutoring in Schools Scheme in Down High School and her application to Wallace in 2007 indicated just how thoroughly she had prepared herself for this life path.

Aside from her impressive academic record at Grosvenor Grammar and Queen’s University Jill had amassed other useful qualifications and skills holding coaching certificates in both Netball and Badminton. She enjoyed putting these to good use in Wallace, assisting with extra-curricular sport and teaching some Games periods in addition to being involved with SU.

Jill was, to quote a former colleague, “glamorous and gorgeous” ; she was also witty and enjoyed a joke. Always chic, her reaction after almost colliding with a colleague wearing the same vibrant M&S summer floral was “Snap!” whilst the rather back-handed compliment ” you would make a fabulous plus sized model” was met with a fit of laughter rather than pique. Her beautiful hair was the envy of many but her defining physical trait was undoubtedly the warmth of her smile even though she had, in common with the majority of teachers, mastered the ” death stare”.

As a teacher Jill was unfailingly diligent. Her pupils gained hugely from her innovative and imaginative teaching and she was always prepared to go the proverbial “extra mile” to support or to stretch individuals she taught. As a colleague she was warm, generous, supportive and well organised contributing fully to the development of resources and schemes and responding positively to whatever new challenge emerged.

Teaching was one facet and one role within Jill’s life but she was also a devoted wife to Jonny and loving mother of Zak and Zoe. Part of a large group of young mothers on the staff Jill enjoyed the lunch time banter in the corner of the staff room where no man usually dares to sit!

Conversations over the years covered such gruesome subjects as labour and smelly nappies coupled with engaging anecdotes about various staff offspring and the management of party bags! The camaraderie of the group was always evident and during Jill’s illness her friends and colleagues rallied round to help, providing home cooked meals and other practical support. It was characteristic of Jill that during her illness she made the effort to attend a colleague’s “hen do” thus creating a cherished memory and she also provided the goodies for a Wallace favourite (the M&S break time) in appreciation of her colleagues’ support.

Teacher, wife and mother are distinctive roles but they were unified by the core role of Jill’s life. A committed Christian Jill sought at all times to live a life consistent with the faith she professed. As her illness gained dominance and her body weakened her faith shone ever brighter.

In answer to the question “Where is God when it hurts?” Jill was able to testify that God was with her. A biblical lifetime is usually referred to as ” three score years and ten.” Jill was not gifted a long life ; her earthly years were the same as that of the Christ in whom she believed. It is often said that ” To teach is to touch a life forever” and the lessons Jill has taught us are more than academic. Many Christians refer to a life verse, words of Scripture that assume a particular importance. We can draw comfort from the fact that Jill was able to affirm in her own experience the truth of this verse: