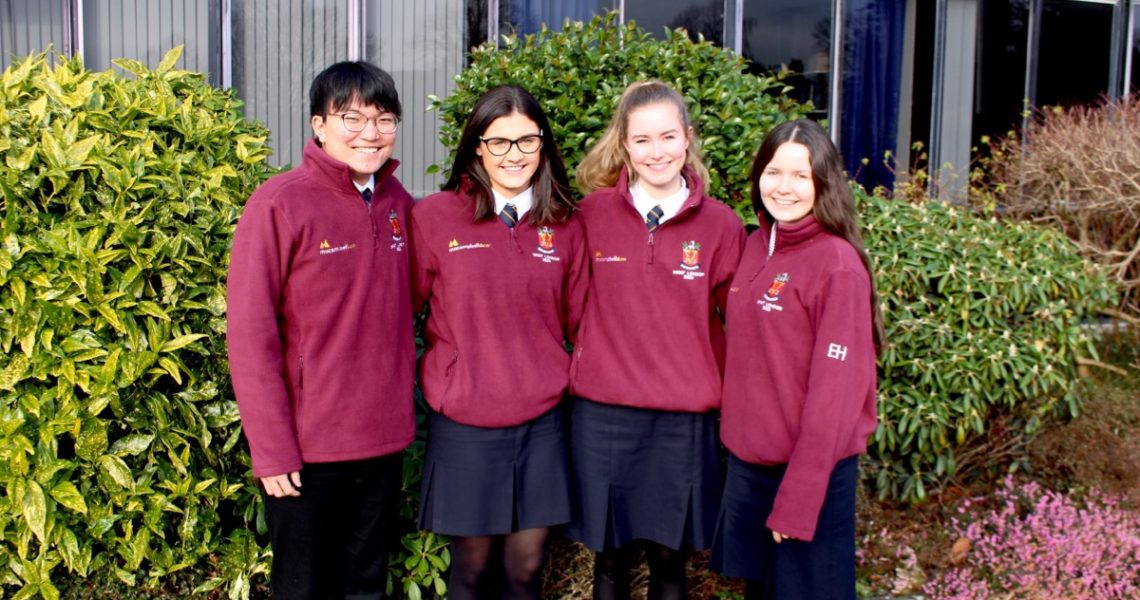 This is the second time a team from Wallace has won the coveted title, with Emily Hayes and Anna Trimble helping the school triumph in both 2018 and 2019.

The STMC tests mathematical skill as well as teamwork and communication through an array of timed challenges; each team has four members. Excellent communication skills and working at speed with accuracy are crucial in order to score well in the competition. The four sixth formers named above were selected from a number of interested candidates after a series of selection questions; they prepared for the challenge by working closely with Mrs Elliott whose after school sessions were designed  to help the students perfect their approaches to each round.

The Wallace team worked exceptionally well whilst competing against schools from across the country, scoring full marks in two out of the three rounds known as ‘Group Round’, ‘Crossnumber’ and ‘Shuttle’.  Having achieved first place, the team secured a coveted slot as National Finalists and competed in the UKMT National Finals, held at the Royal Horticultural Halls in Londonon Tuesday 4th February 2020. The National Final consisted of five further rounds, including a ‘Poster Round’ which required substantial research into the ‘Structure & Symmetry in Chemistry’.

The team wish to thank Belfast based Accountancy Firm Miscampbell & Co.  for their very generous sponsorship of  the team’s travel to London and their overnight accommodation there; their financial generosity funded a tremendous opportunity for our young mathematicians. Whilst in London, the team also enjoyed some sightseeing at iconic locations and savoured the atmosphere of the largest city in the UK.

The team enjoyed the experience immensely and came away proud of having represented Wallace in such a celebrated event. Speaking about the importance of the subject, Andrew, who has spent four years living abroad in Korea, pointed out that Mathematics transcends language, politics and culture:

“It’s the one subject that is 100% transferable and I could use the same maths skills here that I used in Korea”.

Mrs Elliott noted that her students often ask why they should study Mathematics when so many of them now have calculators and various apps on their smartphones. Her reply urges students to “think of who creates that smartphone that gives you those answers. Mathematicians have to be involved in the creation of such tools. For technology to advance we need mathematicians”.

The senior maths team members were keen to point out that the love of Mathematics is about more than its practical uses. Anna commented:

“When you get questions right you get a unique buzz that you don’t get in any other subject”.

Emily added: “The questions are much more about your problem-solving ability than just applying what you learn in class”.

All of the students emphasised how much they enjoyed the team aspect of the Challenge.

Leah commented: “I think the fact that you’re not just doing it for yourself makes you want it that much more and makes you work even harder”.

Andrew added: “In the problem-solving aspect everyone has different skills, so it’s combining all those skills together that makes us so much better as a team”.

The team also expressed their sincere thanks to Mrs Elliott for her commitment and enthusiasm at every stage of the competition.