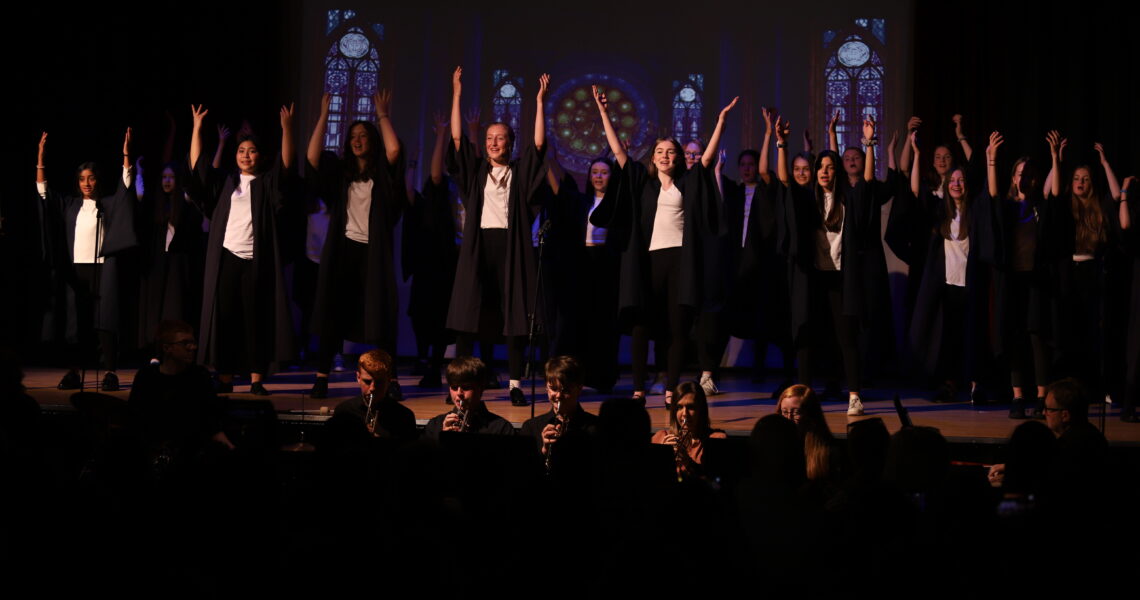 Songs from the Shows- a Wallace spectacular! 

From the opening moments of assured commentary from our Eurovision ready comperes, Tanisha Dowie and Josh (The Greatest Showman) Kamalarajah, an eager audience knew there was a treat in store.

Covid-19 prevented musical activity and public performances for an extended period so it was only fitting that Year 14 students in particular had the opportunity to showcase their performance skills. Samantha Scott opened the show with a terrific rendition of Good Morning Baltimore from Hairspray and also contributed the poignant piece I Don’t Know How To Love Him from Jesus Christ Superstar. Proving her versatility, Samantha teamed up with Deputy Head Girl Rachel Armstrong to sing the duet For Good from the always popular show Wicked. Head Girl, Samia El-Dibany, channelled her inner Olivia Newton-John to sing Sandy’s wistful Hopelessly Devoted To You; Samia definitely rocked the blonde wig!

The show featured songs from many of the West End’s most iconic shows with three pieces from Les Miserables: On My Own, There Is A Castle On A Cloud and I Dreamed A Dream which were admirably interpreted by Rachel Armstrong, Katie Johnston and Niamh Hughes the latter managing the feat of making grime look endearing. Sam Grossmith, our only male soloist, delivered a touching rendition of Where Is Love? from that staple of musical theatre, Oliver and Rebecca Grieve offered the titular piece from The Sound of Music in a week when YouTube was featuring archive footage of a young Julie Andrews singing for Queen Elizabeth’s grandfather.

The GCSE music students selected pieces which spanned the decades of musicals from Oliver to Tangled, The Wizard Of Oz to Mary Poppins and evoked thoughts of Egypt, London and the USA not to mention Whoopi Goldberg’s triumph in Sister Act. The junior choir, accompanied by GCSE musicians and our own Miss Pascoe, delivered When You Believe and Raise Your Voice with aplomb and some great dance moves.

The most recent musical to feature was Hamilton and Year 10 student, Jana Patterson, delivered It’s Quiet Uptown superbly and ably assisted by other members of the evening’s cast. For many members of the audience this was their first time to hear and see Jana and there was no doubt that for many a star was born!

Thanks are due to each and every one of our young performers who provided a great evening’s entertainment. Congratulations also to our Music teachers, Miss Pascoe and Mr Falconer, and to Mrs Rogers who was a one-woman band of choreographer, director and producer. The performances were much enhanced by some excellent costumes and props and the backstage team delivered an efficient set of scene changes. If we enjoyed the performance of The Place Where The Lost things Go we didn’t need to worry about misplaced props on stage.

Expressing his appreciation of all the hard work put in by the performers in these early weeks of term Mr Falconer noted:

“It’s been wonderful to be able to hold this event. Thank you to everyone for all their efforts. I could clearly hear that as an audience you were enjoying all the performances and I’m looking forward to welcoming many of you to the Year 8 concert in October.”