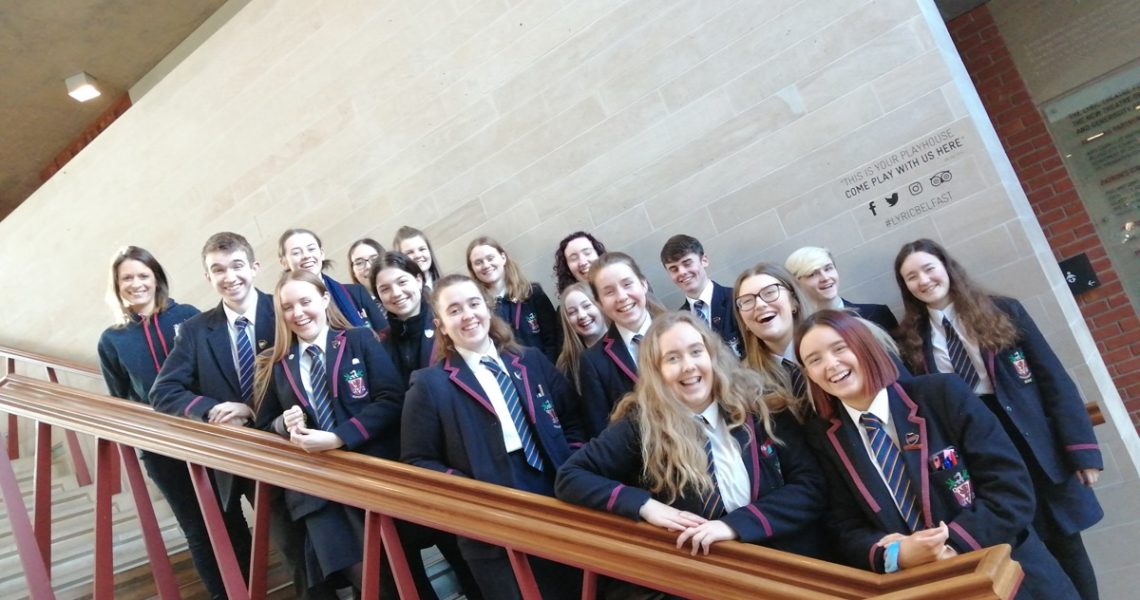 In December some of our junior pupils provided a heart-warming and remarkably creative production of that most traditional of Christmas tales…A Christmas Carol by Dickens.

A cast party has tended to be the traditional follow up to performance but for Mrs Richardson, Miss Thompson and their energetic young thespians something much more innovative was planned.

Wallace is currently in the privileged position of enjoying a schools’ partnership with the Lyric Theatre, Belfast so we were thrilled when the opportunity arose to host a free stage combat workshop through the theatre’s Education and Outreach programme. Ian McCracken from Fightright visited the school to teach the cast of Oliver how to stage fight convincingly. Trainer Ian works with professional actors across Ireland and the UK teaching them the skills of both armed and unarmed combat. The pupils were impressed to hear Ian is currently training actors in the popular soap opera Hollyoaks and took to the challenge of throwing a punch and wielding a weapon with relish.

“Earlier this year we had an absorbing masterclass teaching us stage make up so you can imagine the excitement when cast members were invited to take part in some “ classroom violence” learning how to stage fight convincingly and safely; even Miss Thompson got to be the victim of enthusiastic stage punches and choke holds! Scrooge himself practically pursued me across the stage in his efforts to land a punch on me!

The actors were encouraged to focus on body language and timed responses whilst practising the slaps and punches and creating the “napp”, the term used to describe a realistic contact sound effect.

By the conclusion of the two hour workshop we’d stretched, dragged and dodged, but thankfully we emerged unbruised and unscathed after this thoroughly fun and enjoyable experience. It has also demonstrated to our very talented pupils the opportunities for working in the arts in Northern Ireland.”

As further support in the WHS- Lyric Theatre partnership, the Lyric Education Department recently welcomed some of English Literature students for a tour of the theatre, a presentation and a Q&A session on their A Level text, ‘A Streetcar Named Desire’.

23 students, accompanied by Mrs Richardson and Mrs Rogers, enjoyed the experience of walking through the auditoriums and the back stage Aladdin’s caves of rehearsal spaces, prop stores and costume workrooms. Career opportunities and skill sets in the theatre were explained; in addition, the role of the Lyric during “the Troubles” and the purpose of theatre in current society also came under analysis.

As students of Drama in Literature, the presentation depicting the artistic vision and staging choices of the Lyric’s 2019 production of ‘A Streetcar Named Desire’ gave a fresh insight to students on the symbolic power of lighting, set design, music and costume in theatre.

Our thanks go to the Lyric Theatre for their on-going and exceptional educational support.