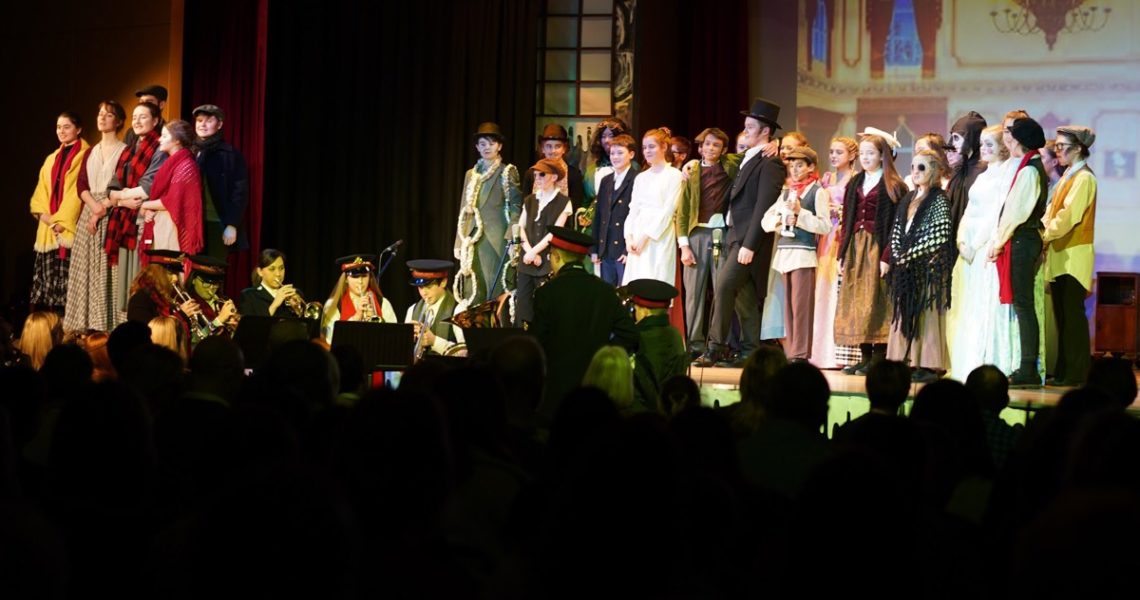 First published in London in 1843 (a mere 176 years ago!) this tale of hope and redemption has never been out of print; millions in the English –speaking world have found inspiration in the story of a converted miser, skipping about in a nightshirt, newly determined to celebrate Christmas in his heart.

Victorians called it “a new gospel” and the story (which Dickens wrote in less than two months) was intended in his own words to be a “sledge hammer” blow, challenging and condemning many of the social norms of the Victorian age.

This was a performance with heart, musicality, style and warmth with meticulous attention to detail and more than a hint of the macabre. Jacob Marley’s image scared more than Scrooge! The audience arrived to Victorian style street urchins offering seasonal clementines (free!) and once seated the audience found themselves enraptured by carols  played by pupils cunningly disguised as a Salvation Army band. In their midst in full uniform (and looking every inch a sixth former masquerading as an adult) was our very own Miss Pascoe who genuinely is a member of the Salvation Army.

The story is so familiar it does not need summarised but this was a production with an unmistakable individuality. Wallace’s love affair with technology, coupled with its eco-friendly mindset, prompted an innovative approach to the programme;  emailed out to attendees it featured live links to filmed interviews with the cast. The use of a new projector enabled some terrific visuals ,not least that memorable  disturbing glance of Jacob Marley, whilst a compact set design created in school served admirably for a range of settings.

This was a junior production supported by some Year 11 and Year 12 students in the cast whilst senior students who are members of Capella provided much of the musical content. The success of the event rested heavily on the shoulders of Oliver Heath; his starring role as Scrooge saw him appear in almost every scene. To refer to another Oliver there was plenty of Oom- Pah-Pah in his performance! Demonstrating both superb comic timing and a voice to terrify younger audience members Oliver provided a performance which was pitch perfect in demonstrating the “Damascus Road” experience of Scrooge. Wallace’s favourite double act the “ brothers Kamalarajah” (Josh and Max) took on the roles of Bob Cratchit, Scrooge’s long-suffering clerk, and his frail, crippled son Tiny Tim. Both brought genuine warmth and pathos to their scenes whilst Jan Faulkner as the ghost of Marley was an intimidatory but ultimately caring intruder upon Scrooge’s Christmas Eve. The ghosts of Christmas past, present and future all delivered their moral messages in a compelling fashion with some great work from the make up team! Katy Hunter as Scrooge’s nephew Fred was an assured performer and Callan Stewart as young Scrooge and Ellie Rodgers as his fiancée charmed the audience. All of the young performers are to be praised for their commitment and enthusiasm.

“ This show is a tribute to the hard work of Mrs Moyra Richardson and her first show in Wallace has been a triumph. When she told me of the show she had chosen I was delighted as it really resonates with Wallace values. She has been very ably supported by Miss Jenny Thompson and I know a range of staff helped in so many ways. As for our young people, they never cease to amaze with their talent and creativity.”