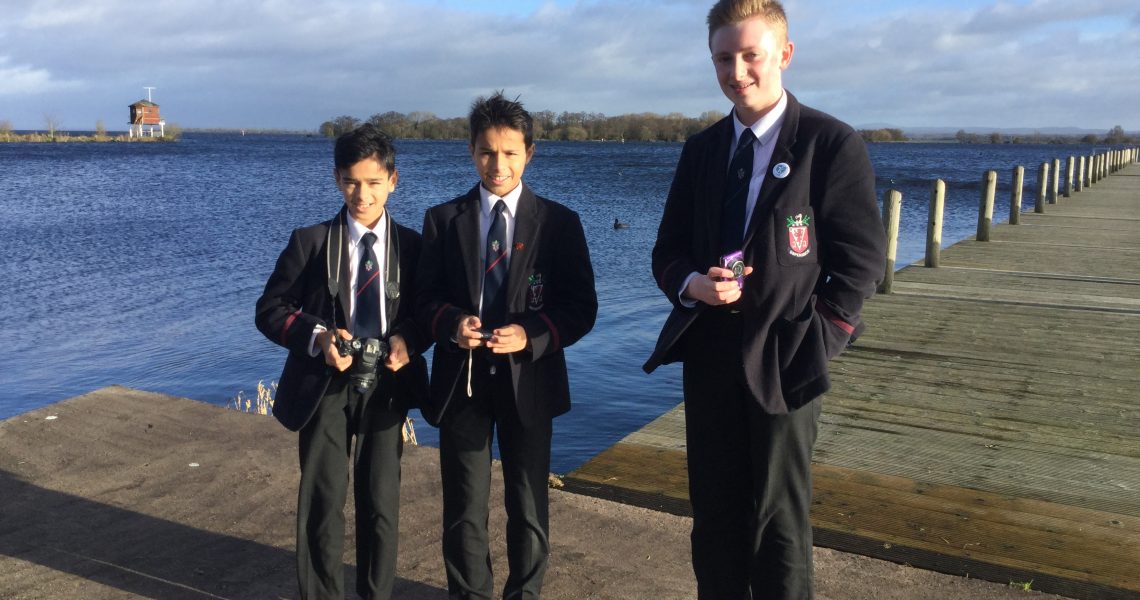 In January six Wallace High School ‘Eco-Warriors’ attended a Media Workshop as part of the ‘Young Reporters for the Environment’ Event at the Lough Neagh Discovery Centre. During the day the pupils were given a presentation by a representative from Armagh, Banbridge and Craigavon Council on the current issue of food waste which is facing this council, Northern Ireland and many countries around the world. The representative also talked about the strategies the council has adopted to help the local population reduce, reuse and recycle.

There were media workshops throughout the day which the students attended and these focused on creating a film, taking photographs and writing stories on the issue of food waste. The event enabled the pupils to prepare their own multi-media presentations, which have been entered into a competition. The entries can be seen below:

‘In the modern world where so many people continue to die from issues associated with food poverty, food waste is morally, socially and economically wrong. This video puts across a simple message: we all have an obligation to reduce and indeed prevent food waste.’

In this video Josh and Max Kamalarajah from The Wallace High School Lisburn report on the escalating crime of food wastage that has infiltrated all levels of modern society. The video addresses the problems caused by food wastage economically, environmentally and morally and then focuses on the villainous practices in our local homes, schools and supermarkets that are collectively contributing to the rapidly growing global food waste footprint. The video challenges the viewer to consider whether they are the hero or the villain when it comes to the felony of food wastage! It may make uncomfortable viewing!

Put together this article on Food Waste:

Did Food Waste Cause ‘The Beast From The East’ To Come For Us?

Food waste produces greenhouse gasses which cause climate change, ultimately causing extreme weather conditions such as ‘The Beast From the East’ that recently attacked Northern Ireland.

Do you know that food waste is the 3rd largest emitter of greenhouse gasses? The energy required for production, harvesting, transporting, and packaging of all this wasted food generates more than 3.3 billion metric tons of Carbon Dioxide. This Carbon Dioxide is then trapped in the earth’s atmosphere causing it to heat up, and cause devastation such as melted ice caps and severe weather conditions such as ‘The Beast From the East’ we were faced with across the UK.

The Problem that is Food Waste…

Food waste is a serious issue, especially in a world where 805 million people go to bed hungry every night. 7 million tonnes of food and drink are thrown away every year in the UK alone, an excessive and easily preventable number. This food waste costs the average UK household £470 a year. Jamie Oliver, avid campaigner against food waste stated: “If most Brits had half an idea of the amount going to waste, they’d be snapping up ugly veg by the trolley load.”

More than a third of all food produced in the world never reaches a table. The problems food faces on its journey include being spoiled in transit, not meeting a set standard, or being thrown out by consumers in wealthy countries who buy too much and end up throwing out the excess.

Even the Pope has addressed the problem of food waste, drawing his weekly audience in St. Peter’s Square’s attention to the excess of consumerism and food wastage, claiming “Throwing away food is like stealing from the table of the poor and the hungry.”

The amount of water wasted worldwide would be the same as the complete annual flow of Europe’s largest river, the Volga. This statistic is horrifying on a planet where it has been predicted that by 2050, 25% of the world will be in drought due to high evaporation levels caused by the higher temperatures of global warming.

The Man(dyck) with a plan…

In an interview for ‘National Geographic,’ Chief Sustainability Officer of United Technologies, John Mandyck spoke of how easily the issue of food waste could be avoided, explaining how if refrigerated transport and storage facilities are improved food wastage could be drastically reduced. “We tend to take our food for granted in the developed world. Since food is so plentiful, we aren’t aware of the tremendous amount that’s wasted and the impact that has on world hunger, political stability, the environment and climate change. Yet when it comes to looking for ways to curb greenhouse gas emissions, food wastage is a relatively easy fix.”

Mandyck concluded “The dividends of avoiding food waste can be historic. We produce enough food to feed everyone on the planet and the 2.5 billion more people to come in the next 35 years. We have to waste less and feed more… The environmental dividends are no less significant: lower climate emissions from a major source and more water efficiency to combat growing water scarcity.”

Ultimately throwing food out is the worst thing to do and there are plenty of ways to prevent it that will benefit you and the environment. Soups are ideal for food on the verge of being thrown out. Only buying the food you need will benefit you financially as well as prevent unnecessary food waste. Food waste leads to global warming, causing such things as the polar ice caps melting, which will raise the sea levels and cause exstinction of such animals as polar bears, global warming will also create extremes in weather, such as ‘The Beast From the East’ that brought Northern Ireland to a complete standstill. So to avoid the horrors of global warming, ensure all food is kept and eaten as much as possible and when it is to be discarded, throw it into the correct (brown) bin.