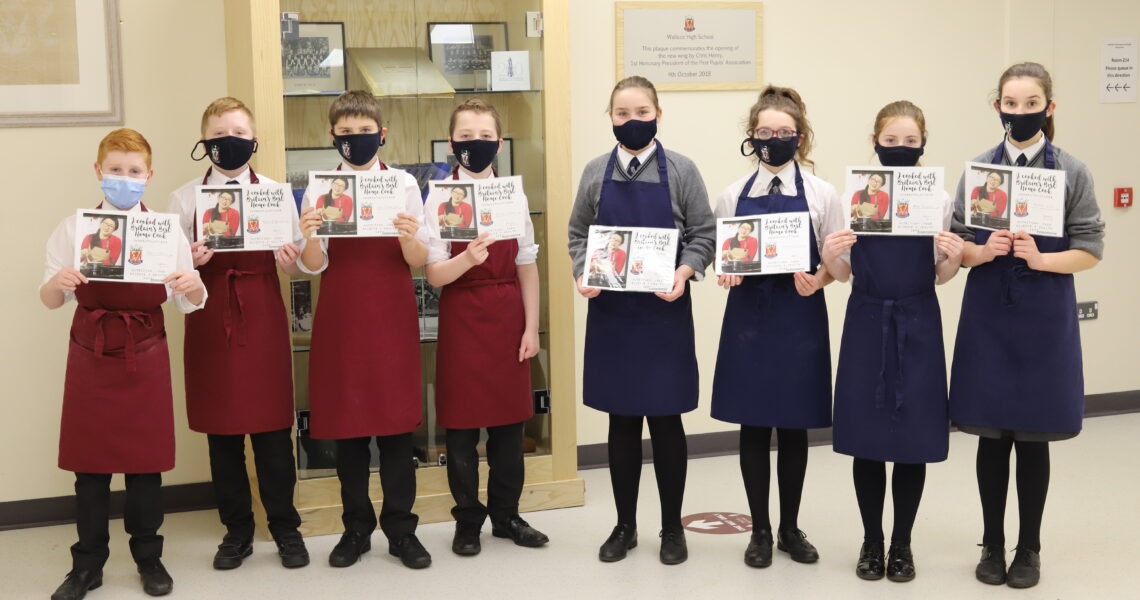 Why do you want to cook with Suzie Lee?

Lots of Year 8 wanted to do just that! Year 8 students hoping to win a highly coveted place at this very special event submitted a short paragraph judged by the staff of the Nutrition and Food Department. We had originally planned for six participants but the competition was so tight staff included an additional two pupils.

Accountant Suzie squeezed us into a very busy day and provided the excited Year 8 students with a master class by Zoom. Wearing a festive sweater Suzie demonstrated from her kitchen which even had a very tastefully decorated Christmas tree to add to the atmosphere! Suzie’s special cookie recipe was the task for the afternoon and the warm, relaxed natural delivery which was the hallmark of Suzie’s prize-winning performance on the BBC series Britain’s Best Home Cook put the pupils at ease. Fortunately the highest standards of hand washing had been observed prior to starting as the advice for checking the temperature of butter was “put your finger in!”

In the best traditions of Blue Peter Suzie had “some I made earlier” to show and kept up a stream of immensely practical advice whilst Mrs Bittle, ably supported by Mrs English, offered on-hand guidance. The pupils were delighted when Head of Year 8 Mrs Carson “popped in” from her classroom holding a roll book detailing Suzie’s impressive performance as a Year 9 student. Suzie had somehow dropped a mark on her risotto; 29 out of 30! To save Mr (Geography) Simpson’s blushes, details of his marks remain a secret!

A key message Suzie transmitted to her young audience was to have confidence. “It doesn’t matter if you open the oven door. It’s not a cake!” was the reassuring mantra for cookies but “Have self-belief. Be the best you can be at whatever you want to be” is great life advice. Wallace devotes time and effort to building resilience in pupils; Suzie gave a terrific example in exploring how she used being the reserve for the Great British Bake-Off as an encouragement to herself to keep trying to get on a TV show.

In a Q&A Suzie gave advice on picky eaters, commented on her favourite dessert, reminisced about Wallace life and even gave us a SCOOP! We’re keeping her secret but keep an eye out for a celebrity version of a game show!

Congratulations to the winners: Zachary Carson, Kirsten Cully, Alice Furphy, Seb McKnight, Reece McQuiston, Sam Norris, Liv Reilly and Jessica Wilson who left armed with their delicious cookies a certificate proudly proclaiming “I cooked with Britain’s best home cook” and a Terry’s chocolate orange (other brands are available…perhaps? ) which will allow them to try out another of Suzie’s cookie recipes.

“It was a terrific afternoon. The Zoom worked so well and the pupils clearly enjoyed themselves. We had watched an episode of Suzie’s recent TV series in preparation for today and in the Department we are big fans of her social media.”

Suzie shared a little known piece of Wallace trivia; during her first year at university she had only about eight hours of classes so she worked as a technician in the Biology and Home Economics Departments. Her final comment was the heart- warming observation:

“I loved Wallace so much I didn’t want to leave!”