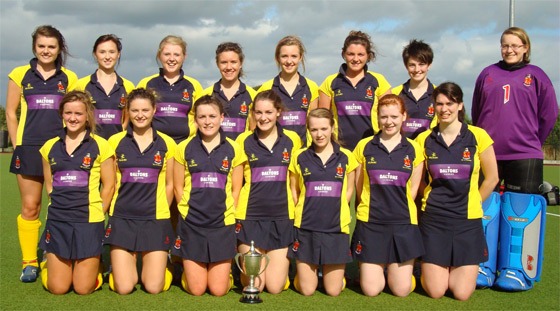 The Wallace High School Girls 1st XI have enjoyed a successful start to the season sharing the Bank of Ireland Schools’ Tournament with Strathearn.

The Lisburn girls came through a tough qualifying tournament at their home venue Lisnagarvey drawing with Lurgan College, Hunterhouse and Dalriada before defeating Glenola 2 – 0 to clinch qualification, netball star Sarah Montgomery getting one of the goals and captain Lauren Wilson the other.

Last Wednesday the girls were again glad to be on home turf as the finals day again took place at their Garvey home. This time they defeated Omagh Academy 1 – 0 (Ellen Hood) and Foyle and Londonderry by the same score line (Wilson on the score sheet again) before drawing 0 – 0 with Strathearn in the final.

Captain Lauren Wilson was understandably delighted with the performances over the course of the tournament,”The Schools’ Tournament is a great way to start the season with the opportunity to play competitive games against other schools.

We have a young team this year so take great confidence from sharing the trophy. Hopefully this success will stand us in good stead for a long and exciting season ahead”