A Tale of Two Franks 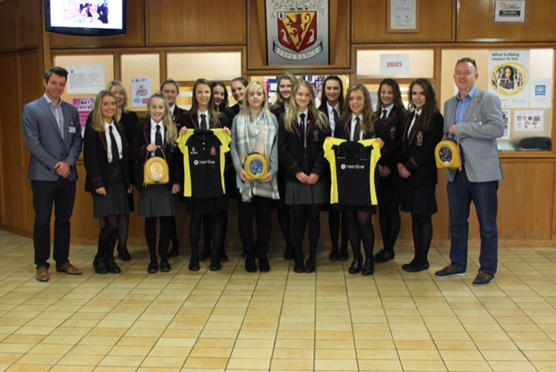 On the very centenary of the birth of Professor Francis ” Frank” Pantridge, the inventor of the mobile defibrillator, Wallace pupils were privileged to enjoy a dynamic presentation from Frank Flynn of HeartSine Technologies, a company devoted to achieving Frank Pantridge’s goal of seeing mobile defibrillators regarded as an equivalent essential to a fire extinguisher. The company is a world leader in the provision of AEDs ( Automated External Defibrillators) and HeartSine is also the current sponsors of the Wallace Girls’ 1st X1 hockey team. Mr Flynn was delighted that the team is currently on a very impressive winning streak.
Frank Pantridge is the only cardiologist to have had a public statue erected in his honour and to have conducted pioneering work that would subsequently save the life of a President of the United States of America. The statue is situated at the Council’s Island Centre which was the venue for recent commemorative events to honour the memory of one of the Borough’s most celebrated sons. 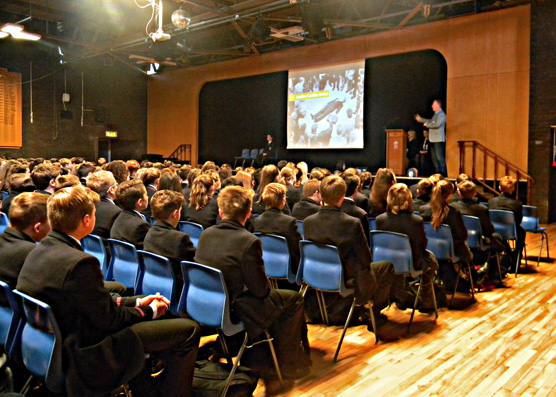 Speaking to pupils Mr Flynn highlighted the remarkable life of Professor Pantridge who was a holder of the Military Cross; the citation recorded his ” inspiring example to all with whom he came in contact.” Professor Pantridge survived the usually fatal cardiac beriberi whilst imprisoned in the notorious ” death camp” Tanbaya; this may have sparked his special interest in heart disease.
Mr Flynn’s presentation traced the history of defibrillators from the first 1965 ” portable” model which operated from car batteries and weighed 70 kilos to the modern efficient, lightweight items which are in Wallace today. He explained the company’s goal of “spreading the word” about the importance of first response and shared with students fascinating real life stories of individuals, both young and old, whose lives have been saved by mobile defibrillators. Cardiac arrest can happen at any age and people who have abruptly gone into cardiac arrest can only be brought out of it within 10 minutes for the maximum chance of survival.
Year 10 Biology students and Year 11 GCSE Journalism students had the opportunity to hear a more extended presentation and to question Mr Flynn and some of his colleagues from HeartSine about the history and development of the technology we take for granted today. Year 11 student Holly Mackin said:

” I was interested to hear of the company’s ” 2016 in 2016″ campaign ; the aim is to educate 2016 people in the use of the defibrillator. The statistics shared with us were fascinating as hearing the vast numbers of deaths in the UK caused by cardiac arrest made me realise how vital AEDs are. The comparison Mr Flynn drew between deaths caused by fires and those caused by cardiac arrest really made me grasp Professor Pantridge’s vision. It is great to think that 500 Wallace pupils heard the message today and will try to spread awareness about cardiac arrest.”

Mr Peter O’ Hare who accompanied Mr Flynn to Wallace highlighted that ” the business is ethically driven, this business is about saving lives” and Mr Flynn concluded that ” Frank Pantridge’s nature brought us to where we are today.”

” I am aware that Professor Pantridge maintained that a defibrillator should be beside every fire extinguisher since life was more important than property. We are very fortunate in Wallace to have several defibrillators and I shared with students in assembly the fact that many local shops are being equipped with this life saving equipment. We are very proud to be associated with HeartSine and delighted that such a progressive and worthy company is acting as the sponsor for our premier girls’ team. I am delighted that Frank and his staff took the time to visit us on this meaningful anniversary and thank them sincerely for a most interesting presentation.”

A Year 10 pupil has written to the Mayor of Lisburn and Castlereagh to ask for a comprehensive list of AEDs in the area, a proof of the effectiveness of HeartSine’s educational outreach. An interesting film on how to use the technology can be accessed on the following link.