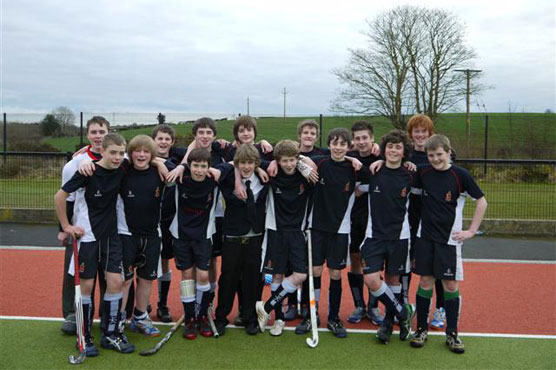 The Wallace High School boys’ under 14s came agonisingly close to winning the Ferris Cup on Monday, eventually falling to a 1 – 0 defeat by Banbridge Academy.

The Lisburn lads had advanced comfortably to the semi final stage, having dispatched Bangor Grammar School 9 – 1 and Sullivan Upper 6 – 0 in earlier rounds, and faced a semi final clash with neighbours Friends on St Patrick’s Day at the Dub. A large crowd turned out to watch a close game which ended 1 – 1 after extra time, Jonathan Scott on target for Wallace.

This necessitated a replay on the following day at Lisnagarvey, where despite a disappointing first half and a 0 – 1 deficit, they showed great courage to overturn the performance and result and dominate the second half. Year 9 pupil Nathan Cartmill was the hero in this game with two clinical finishes from the top of the circle, one on the open stick and the other a fantastic reverse stick effort.

With little time to recover, the Wallace team were by far the better team in the final at Lisnagarvey Hockey Club. Having drawn both games against Banbridge Academy this season, a close game was anticipated and this was the way that the final turned out.

Wallace played a very pleasing style of hockey throughout the game with intricate, short passing which often cut the Banbridge defence to shreds, whereas Banbridge depended on the long ball out of defence. The Lisburn school created several clear cut chances throughout the game, although their best chance to win came in the first half of extra time when a Callum McCandless effort was superbly saved by the opposition keeper.

Unfortunately, with only minutes to go in the second period of extra time, Wallace conceded a disputed penalty corner and although Thomas Logan dealt comfortably with the initial shot, the rebound was dispatched low and hard into the bottom corner to end another Wallace hockey dream.

This was a difficult defeat for the players to deal with having played so well throughout. Goal keeper Thomas Logan was solid during the entire cup run and was supported superbly in the final by his centre backs Thomas McRoberts and young David Arneill. Captain Sean Murray, Ryan Getty and Mark McNellis were real driving forces in midfield and were instrumental in the pleasing style of hockey adopted by the team.

The boys will now go on to represent Ulster in the John Waring All Ireland Schools’ Competition at Lisnagarvey on Wednesday 6th April, some reward for an outstanding season. There they will face up to Banbridge again, as well as Dublin heavyweights St Andrew’s and Wesley College and two Munster representatives.