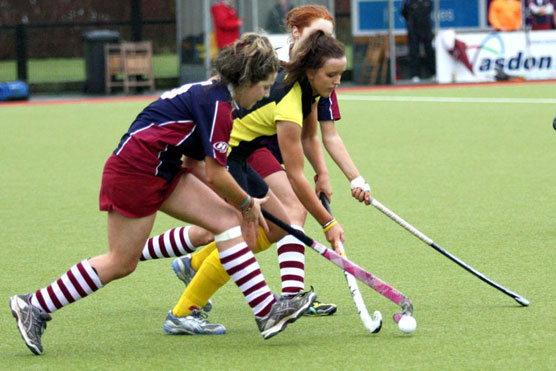 The Wallace High School girls’ 1st X1 have made history by reaching the Schoolgirls’ Cup final for the first time, defeating Victoria College 1 – 0 on Wednesday.

Captain Tessa Stewart scored the only goal of the game at rain – soaked Lisnagarvey to send the Wallace supporters in a four figure crowd wild with delight. The goal, scored in the 14th minute of the game was the least that the Lisburn girls deserved having dominated the game from start to finish and was the result of a superbly worked penalty corner switch which Stewart struck sweetly into the bottom corner.

Goal keeper Anna Jones was called into action only twice in the entire game but reacted smartly in the first half, coming off her line quickly to blunt the Victoria attackers. She was ably assisted by defenders Steffi Baron, Tamilla Matchett and Jo Leathem who all had solid games, and who helped control the game for Wallace in the first half.

At the other end, Year 11 pupil Laura Murray was proving a real driving force and was unlucky not to score after a great run from inside her own half which resulted in a shot shaving the far post. The Lisburn girls also won another penalty corner where they attempted the same switch routine but poor execution meant that the game remained in the balance going into the second period.

With the rain now lashing down the second half was something of a scrappy affair with both teams finding it difficult to play constructive hockey. Again the Wallace defence were calmness personified with captain Stewart taking control of every situation. They rarely allowed their Belfast opponents into their circle and reacted quickly when required to do so. With 10 minutes to go in the game and history beckoning, Lisa MacDonnell took control of the game and used her tight skills to win free hits in the Victoria half.

She also played two superb passes, one of which resulted in a Wallace penalty corner which the Victoria keeper turned brilliantly over the crossbar from Murray. Another penalty corner, won in the final minute, meant that the Lisburn girls could run down the clock although Rachel Morrow had the opportunity to score a well deserved second goal, the opposition keeper again denying them with an outstanding save.

There were joyous scenes at the end as the coaching staff and players celebrated in the middle of the pitch as the vociferous crowd roared their approval. They also made a victory tunnel for the squad as they left the pitch. Captain Stewart was modest as ever and gave credit to her whole team: “I’m really proud to have scored the goal which takes Wallace into their first ever final but it didn’t really matter who scored as long as we won the game.

We have a young squad but everyone played their part and we can’t wait to start preparations for the final now.” Ex international player Maggie Hunter, Wallace teacher and coach has seen it all in the game, including playing in World Cups, but she was understandably delighted and proud of her squad: “Some people didn’t give us a chance of beating Armagh Royal in the first round, but we did and the team have come a long way since that victory on penalty strokes. 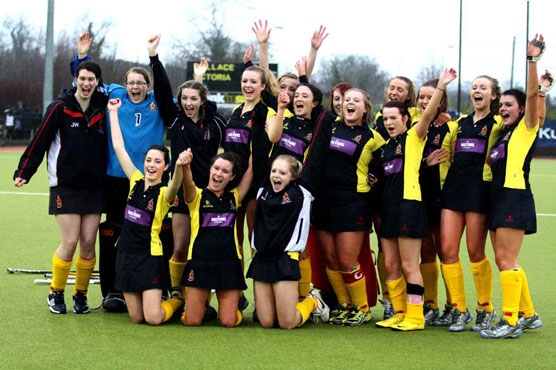 The girls were superb today and totally deserve their success for the work and attitude that they have displayed throughout the year. I would also like to thank all the staff and pupils who came out to support us on a miserable day and who helped to create a memorable atmosphere for both teams. I have told the girls to enjoy the moment and then get ready for the biggest game of their lives against Lurgan College in a few weeks time.”