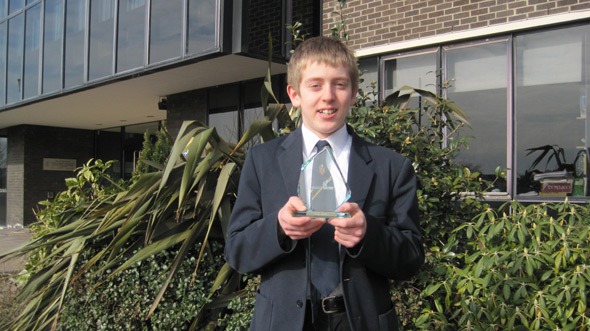 One of Wallace’s very own Year 11 pupils and member of the Salto Gymnastics Club recently represented Northern Ireland at The Celtic Cup which was this year hosted by the Welsh Institute of Sport. Matthew was the only Northern Ireland Junior boys’ competitor. He had a good competition, scoring a total of 63.45 points and was placed 9th Overall.

He also received the Gymnast of the Year award for Men’s Artistic Gymnastics at the inaugural “Gymnast of the Year 2009” Awards Ceremony. This was held in the Long Gallery, Stormont, and was presented to him by MLA Jim Shannon. Having already represented the Northern Ireland team at the UK School Games he also competed in the London Open last weekend in Dagenham as part of his preparations to represent Ireland in the Junior Europeans Men’s Artistic Gymnastics in Birmingham in April.

Commenting on the season ahead Matthew said: “I’m really looking forward to the Junior European competition in April at the NEC, Birmingham where I will be competing with the Irish Junior Team.”