The Wallace High School’s Girls’ Under 15 Cricket season came to a spectacular end last week with Wallace once again bringing the Cup home to Clonevin Park. The Lisburn girls were given a bye in the first round and made great use of the extra time provided for extensive practice.

They had a tough away fixture to Down high in the semi finals, and due to adverse weather conditions the match was played on gravel. Batting first, Wallace got off to a strong start with Caroline Davis and Tessa Stewart batting sensibly through the first few overs and taking advantage of some Down High bowling errors.

The loss of Stewart fortunately made little difference as Davis found her form, however a mistimed shot saw her caught out for 22. Jade Neely and Jenny Moore started slowly and Down High began to make progress before some erratic bowling and good running between wickets saw the Wallace girls move the score along at a good pace . The innings closed with Wallace making 81 for 2 off 16 overs and Neely (12 n/o) and Moore (11n/o).
Down High started brightly but Davis and Perri Porter bowled well and wickets fell at regular intervals. The change of bowlers brought on Sarah McCallan and Amy Jamison who each continued to take wickets and Down were out for 33, with Porter (1-13), Davis (1-11) , Jamison (1-18) and McCallan (3-4) all making strong contributions. 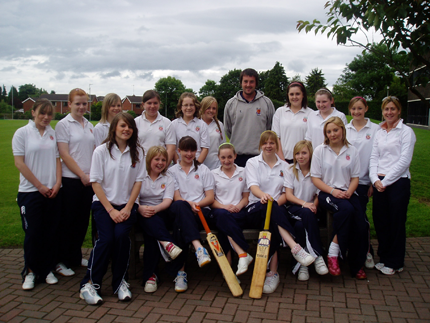 The Wallace girls now faced the long trip to Strabane for the final of the Schools’ Cup. Having won the toss, Wallace chose to field and this turned out to b

e the correct decision, as, due to the combination of good fielding and excellent bowling Strabane were all out for 31. McCallan (4-4) and Porter (2-10) were the pick of the Wallace bowlers with McCallan twice enjoying the chance of a hat trick .Chasing a very small total in twenty overs, Wallace started poorly with both openers going che

aply. Neely and Moore again steadied the innings and took the score to 28 before Neely was out. Holly Clarke came to the crease and smashed her first ball through the leg side for four , ending the game with Wallace winning by seven wickets and bringing the Schools’ Cup back to Clonevin Park for the second successive year.

Chris Parker, one of the girls’ coaching team, commented, “At the start of the season the girls realised they were in a tough position as only three of them had played cricket before. However I’m thrilled that they showed such drive and determination, displaying total commitment to practices. The sense of enthusiasm and enjoyment for the game led to an amazing improvement in just a matter of weeks. Most of the squad will be eligible to play at Under 15 level next year again, so hopefully we will be in with a chance of bringing the Ulster Schools’ Cup back to Wallace for three years in a row.”

Captain Amy Jamison concluded, “We have all thoroughly enjoyed this season and would like to thank our coaches Miss Coughlan, Richard Simpson and Chris Parker for their advice and encouragement. Cricket is often considered an all male sport but I would certainly recommend it to any girls too. “