Having flown into Schipol Airport early on Friday afternoon, the eighteen man squad travelled from their base in Den Haag to HC Rotterdam, a venue which has hosted many top class international tournaments over the years and a club with over 2500 playing members. Unexpectedly their first match was to be on the main stadium pitch which later that night was to host the men’s league game between Rotterdam and league leaders Amsterdam. This game against the under 18 side ended in a 1 – 2 defeat for the Lisburn school who gave a more than creditable performance against a very good side, captain Matthew Nelson the goal scorer with a superb reverse stick finish from a penalty corner. A short break was followed by a game against the under 16 team which resulted in a 4 – 0 win for the Wallace team. 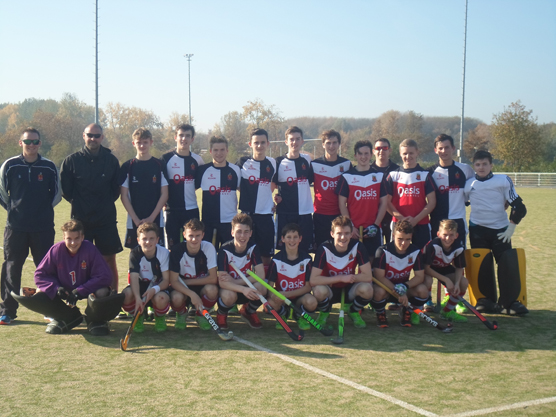 After the games the players and coaching staff enjoyed a meal at the club before settling down to watch the Hoofklasse game between two of Holland’s top club sides featuring famous international players such as Billy Bakker, Valentin Verga and Jeroen Hertzberger who recently won European gold medals with the Dutch national team. The game finished 2 – 2 in front of a big crowd with all from Wallace enjoying seeing top level club hockey.

Saturday was a free day for the tour party although a visit to specialist hockey shop Dekker Sports in Den Haag proved popular, whilst everyone enjoyed watching the Rugby World Cup final between New Zealand and Australia. A well deserved pizza that night ended a relaxing day for all before a busy Sunday ahead.

With great autumnal weather a feature of the trip, the squad headed to HC Rotterdam on Sunday where they played an internal 9 v 9 game in warm and sunny conditions. The two teams were led by Year 14 pupils Matthew Nelson and David Arneill with staff and teams coming up with some unusual rules which resulted in a high scoring and fun occasion, Matthew’s team edging to victory with a late goal. 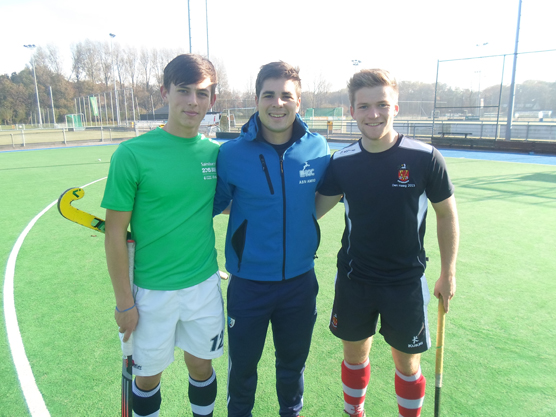 After another superb lunch at the club, the tour party travelled to Pinoke Hockey Club in Amsterdam to watch Pinoke versus an HGC side featuring the three players who were to coach them the next day. Another entertaining game ensued with HGC scoring a last minute goal to clinch a 3 – 2 victory in a brilliant hockey park with three clubs and twenty astro turf hockey pitches. Some more free time in Den Haag was then followed by a final tour meal in a high class local restaurant, steak and chips the food of choice for most.

The undoubted hockey highlight of the tour took place early on the Monday morning at HGC Hockey Club where the Wallace players were treated to a coaching session by international stars Gonzo Peillat from Argentina (FIH Young Player of the Year and top goal scorer in the 2014 World Cup), Phil Burrows (three time Olympian and capped 343 times by New Zealand) and Ben Arnold (25 caps for Great Britain).

Holland 2015 from Wallace High on Vimeo.

As a drag flick specialist, Gonzo took Matthew Nelson and Andrew O’Hare for individual coaching, whilst Phil and Ben concentrated on different types of finish in the circle. The session concluded with the three stars setting up a penalty corner routine with young goalkeepers James Ritchie and Ben Johnston trying to save some of Gonzo’s thunderbolt flicks, whilst they were all more than happy to sign autographs and pose for pictures with the travelling squad.

Captain Matthew Nelson was delighted with the opportunity to play in Holland and commented: “It was brilliant to get the chance to visit one of the top hockey nations in the world, playing and watching top class players and teams. Getting the opportunity to be coached by international superstars and especially Gonzo was unbelievable and getting personal coaching from him can only help Andrew and me with our drag flicking.”

All in all, this was a fantastic experience for the tour squad with staff and pupils enjoying all that Holland has to offer. Links have been established with HC Rotterdam and the close bond between HGC remains, whilst the possibility of future generations being coached by top class international players looks highly promising. All involved wish to thank their parents for their support and also Mrs Sandra McCabe from Oasis Travel who helped with organisation of flights and also generously sponsored tour t shirts which were worn by the tour squad throughout the trip.