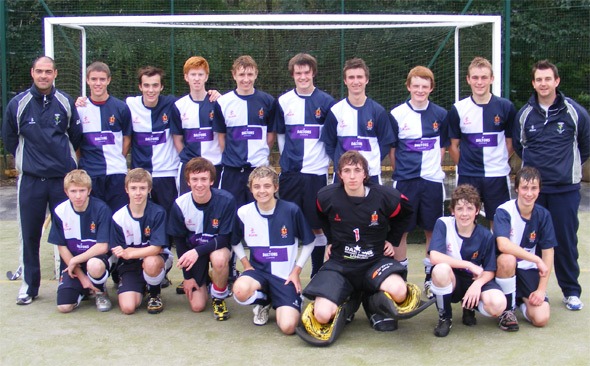 The Wallace High School Boys’ 1st X1 completed qualification for the prestigious Irish Schools Tournament on Saturday when they defeated a determined Methody outfit 5 – 3 in a pressure match at Deramore. Both sides went into the game knowing that defeat would mean that they missed out on taking part in the Ulster based tournament next week.

The game was a superb advert for local schools hockey and it is a shame that both sides could not progress. The Lisburn lads took an early lead when Ulster under 18 interpro player Matthew Murphy scored an excellent reverse stick goal. Methody then had a spell of pressure where they equalised and also watched on in disbelief as Luke Williams in the Wallace goal made two stunning saves. Murphy then scored just before half time to send Wallace into the half time interval with a much needed confidence boost.

Into the second half and Wallace dominated the first 15 minutes as Methody barely made it out of their own half. This pressure was reflected in two goals, Michael Keery and Peter MacDonnell on target, whilst the opposition keeper made several superb saves from Murphy at penalty corners. Some over elaboration with 10 minutes to go gave Methody a sniff of coming back but Murphy completed his hat trick with a well taken first time shot to confirm Wallace’s passage to the tournament proper. Adam McCann deserves mention for a stunning take off the line whilst a late goal for the Belfast side took some of the gloss off an otherwise superb display.

This victory followed on from an excellent 2 – 1 victory for the Lisburn lads over top Dublin school Wesley College last Wednesday at Lisnagarvey HC. Murphy was again on target whilst the under rated and hard working Stephen Hood got the winner.

There were many other games for all teams throughout the week. The 2nd X1 lost their unbeated Prior Shield record at Newry High School conceding two late goals to lose 1 – 2. For the record Stuart Black was the goal scorer. They also travelled to Shaws Bridge on Saturday to take on RBAI and a similar tale of late goals led to a 0 – 2 reverse.

Three junior sides were also in action against RBAI on Saturday, the action here taking place at Queens. The under 15s played a full part in an entertaining game before eventually losing out 2 – 3 to their determined and skilled opponents, Jonny Dalton and Ross Kelly on target.

Both the under 14 and 13 sides produced tremendous displays in defeating their illustrious opponents 7 – 0 and 6 – 0 respectively. Daniel Nelson (3), Mark Acheson (2), Jack Wilson and Luke Chambers were the scorers for the 14s whilst captain Sean Murray led the way for the 13s with four superbly taken goals. Callum McCandless was also on the score sheet with the other two in this game.

There is little rest for the 1st X1 who travel this week to holders Cookstown High in the McCullough Cup hoping to make it three wins out of three in this competition although they realise how tough the task will be. They must then prepare for their third year in a row at the prestigious Irish Schools Tournament where they are in a tough group. On Wednesday at Campbell they face Midleton College 12 noon start, whilst they start on Thursday against Cookstown High School at Queens at 9.30am. Their final group game is against holders St Andrews on Thursday at Queens, 1.30pm start. All support is very welcome from the local hockey community.