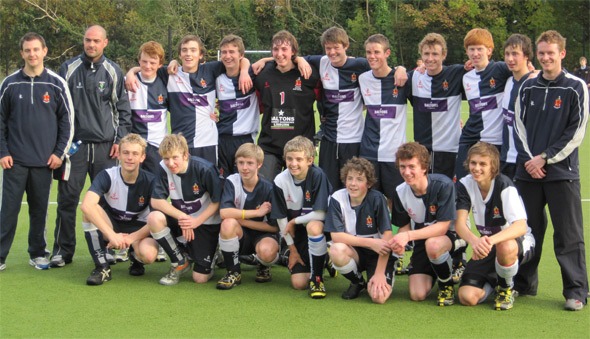 The Lisburn lads had to pre qualify for this prestigious tournament and only recently sealed their place with a nervy 5 – 3 victory over Methodist College Belfast. This left them in a tough group for the competition which was hosted superbly by Campbell College in Belfast, their opponents being Midleton College (Cork) and the two previous winners Cookstown High and St Andrews (Dublin).

Wednesday saw Wallace play in the first game at Campbell where they faced up to a dangerous Midleton side including several underage interpro and international players. This did not seem to worry the squad at all as they swept them aside 4 – 0 with a ruthless display of attacking hockey. Matthew Murphy led the way with a brilliant hat trick and announced himself quickly as one of the players of the tournament, whilst the industrious Michael Keery weighed in with the other.

Onto Thursday and two crunch games were played at Queens against well respected opponents. Again their opponents were outplayed by skilful, fast passing hockey and both games were won by the same 4 – 0 score lines. The goal scorers in the first game against Cookstown High were Timothy Crean, Matthew Murphy, Peter MacDonnell and Stephen Hunter. Peter’s goal in particular will live long in the memory of those who were there as he beat several players before unleashing a ferocious shot into the roof of the net.

Scorers in the second game against St Andrews were Matthew Murphy with a well executed drag flick, Jonathan Crean and Peter MacDonnell (2) who again stole the show with a wonder goal on the reverse stick.
A large crowd from Wallace and the wider Lisburn hockey community gathered at Campbell early on Friday morning to witness the semi final against the traditionally strong Ashton Grammar School from Cork. Despite being awarded an early penalty stroke which was then mysteriously over turned the Wallace boys again produced an enterprising performance to triumph 4 – 1. Matthew Murphy underlined his international credentials with another stunning hat trick whilst MacDonnell continued his own outstanding form with another goal.

As the players went to Queens to get away from the final venue, the school community rallied and five buses were quickly booked and filled for the 2.30 final time. Banners of support were hastily made, song sheets produced and a hockey band was assembled. This created a superb atmosphere at the ground as the four figure crowd waited in anticipation for what was sure to be a great final. This is exactly what happened as the Wallace players gave their all against a Wesley team packed full with Irish underage international players.

The score at half time was 1 – 0 in favour of the Lisburn lads as Stephen Hunter (who earlier received 5 stitches for a nasty facial wound sustained before the semi final) scored a well worked penalty corner move. They also felt slightly aggrieved at having what looked like a legitimate goal from Peter MacDonnell being ruled out for feet. 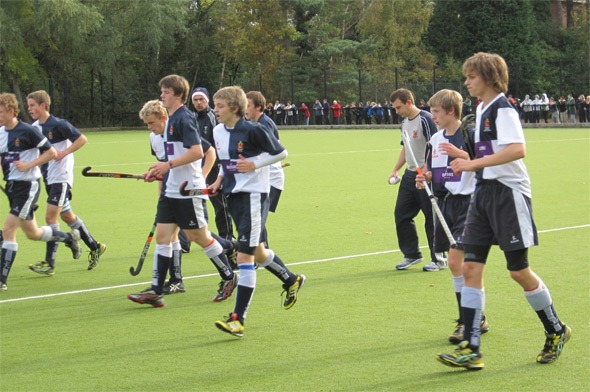 Into the second half and Wesley played some excellent hockey to take a 2 – 1 lead but again the Wallace players summoned up the physical and mental courage to reply, the same penalty corner move with the same finish from the outstanding Hunter.

Wallace were also thankful for their goal keeper Luke Williams and his defence led by the brilliant Richard Arneill and also containing Adam McCann, Glenn Reid and Stephen Murray.

This meant that the game went into silver goal extra time. Wallace won a penalty corner with 4 minutes remaining in the half but Murphy’s initial shot was well saved by the Dublin keeper and Michael Keery’s follow up was rather luckily deflected for a long corner.

The powerful Wesley forwards then went straight up the other end and with two minutes remaining scored the winning goal from a second phase penalty corner after another brilliant save from Williams.

The dream was now over as only one minute remained on the clock and when time ran out the Wesley players were justifiably ecstatic whilst the Wallace players were deflated after their extraordinary efforts in playing 5 games in just over 48 hours.

Wallace 1st X1 coach Gareth Kidd was understandably proud of his players for their performances over the course of the three day tournament. “What an unbelievable journey we have been on over the past few days. I can’t praise this group of players enough for their commitment, skill levels and efforts not only at the tournament but throughout what has so far been a very busy season. Our representative players stood up and were counted whilst the other players grew as the matches got tougher, a sign of a good team and mentally tough individuals.

I would also like to take this opportunity to thank all our superb supporters who sent messages of support and who created a brilliant atmosphere at the semi final and final. Believe me; the players will never forget the experience of playing in front of such a large and positive crowd.

The Wallace players will now get a well deserved ten day break before going into three important McCullough group games which they must win to top their group and thus qualify for the semi finals of this particular competition.
The Wallace squad for the Irish Schools was as follows: