“Celebrating Success” was the theme as The Wallace High School hosted their first ever Junior Prize Ceremony on Wednesday night. The event, sponsored by the hard working PTA, was a tremendous occasion as the large crowd enjoyed celebrating the curricular and extra curricular successes of pupils currently in Years 9 – 11.

Vice Principal Mr Alastair Craig addressed the pupils and guests and was full of praise for the achievements of all 171 prize winners.

BBC Sports Journalist and former Wallace pupil Denise Watson presented the awards and enjoyed the evening immensely. “I am very proud of my connection to Wallace and was delighted to be asked back to present prizes at their first Junior Prize Ceremony. I can remember when I was at school being presented the House Cup by Irish rugby international Willie Anderson so to be asked back to do something similar is quite an honour.” 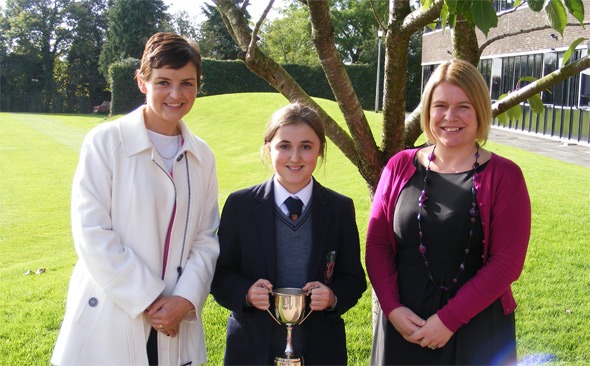 Prizes totalling £1700 were generously donated by the PTA for categories in Effort, Improvement, Subject Prizes and Outstanding Academic Achievement. Commenting on this Mrs Beverly McClean, Chairperson of the PTA said “We are delighted to support the pupils and to celebrate their achievements in all areas of school life.

The PTA plays an important role in helping to raise funds which in turn adds tremendously to the pupils’ enjoyment of their time at school. Our next major fund raising event is the Christmas Dance on Friday 11th December and I would encourage as many people as possible in the Lisburn area to come along and support what is always a superb night.”

Katie Lockhart (Year 9) and Peter Martin (Year 10) received trophies for Overall Outstanding Achievement in their respective year groups whilst Evie Thompson (Year 11) received the Alastair McWilliams Trophy for Overall Outstanding Academic Achievement in her year group. This trophy was presented by the McWilliams family in memory of their son who died tragically in 1994 whilst still a pupil in Wallace.

Principal Deborah O’Hare was understandably delighted and proud of the successes of all prize winners. “I am particularly pleased that there is now an evening to celebrate the achievements of our junior school students who play such an important part in our school life and congratulate all those who have won prizes tonight.”